How to Find the Best Touch Screen MP3 Players

All About Touch Screen MP3 Players

Touch screen MP3 players are the popular in the market These sleek devices offer both audio and video entertainment, wireless connectivity, and more.

On this page we'll tell you a bit more about touchscreen devices, ideas on choosing one, talk about the future, and show you some of the best touch screen MP3 players on the market right now. We'll even provide some video reviews and demonstrations to help you along.

With touch screen MP3 players available you may wonder why they would be preferred over other models. One reason for many consumers of course is just the look of the device. It's very sleek and modern. No buttons, knobs, or wheels protruding. There's nothing clunky about a touch screen.

In addition, the navigation for some people is simply eaiser. With increasing miniaturization, buttons and so forth continue to get tinier and tinier. Being able to use the larger display on an MP3 or MP4 player allows users to have more area to dedicated to navigation. In addition of course, some of these devices allow for a variety of movements for control. Some may find swiping to be more intuitive than pushing buttons.

Now of course for some this may not be the case. For instance, for those with significant visual impairment or blindness many touch screens create a problem due to their lack of tactile feedback and difficulty in finding the right hand position. Technology however, should continue to advance in this area. You can read more about this in our section on the future of touch screens.

If you're in the market for a touch screen MP3 player there are just a few things to consider:

Make sure the device will support the types of files you'll want to download. Know how you want to connect. Would you rather have Bluetooth connectivity with other devices such as your cell phone or a Wi-Fi connection? Nearly all of these touch screen MP3 players should offer USB 2.0 connection with your computer when needed. If you'll view a lot of photos or videos, be sure you get the size screen that will satisfy you. Watching it in action before buying is best too so that you can be sure the brightness, resolution, and so forth are satisfactory. Optimally, you can watch it both indoors and out to assure that it performs well in all lighting environments. Audio quality. Listening before buying is good as well. Stereo speakers are better than a single built in speaker. At a minimum, there should be a headphone jack to allow you to listen in a crowded environment. If the quality of the earphones is poor, you may need to consider buying better earphones. Capacity and battery life. Clearly 160GB storage will allow you to carry around far more music and videos than 8GB but how much you need as an individual isn't so defined. Decide how much you need and how much you're willing to pay for it. Also think about how often you're willing to stop and charge up your player. For some people the number of hours they can enjoy their player before charging is critical, for other's it really isn't. Consider the other features you want. For instance, some of these touchscreen MP3 players offer the ability to play recorded programming from your set top box, to enjoy video from the web, or to enjoy FM radio while others don't. Now of course some media players are more like a tablet, offering features like WiFi for getting access to internet stations and content, they may allow video chat, e-mail and text messaging functions and so forth. Size. None of these devices are very large but some are smaller than others. The Archos 605 is a full fledge multi-media device while the iPod Touch is more about miniaturization. Decide which better suits your needs. If you want to jog with your MP3 player obviously the Touch is a better choice but if you will prize the ability to watch movies while you're out on the road the Archos 605 would better meet your needs.

The newest Apple iPod Touch continues to set the pace. It offers a 4" Retina display that is great for navigating and for enjoying video. It comes with Apple EarPods for better fit and sound quality. It comes in a variety of colors as well as 32GB and 64GB capacities. You get a 5 megapixel camera capable of recording 1080p HD video, a FaceTime camera with 1.2 megapixel photo and 720p video recording. Users can text message for free over WiFi and enjoy up to 40 hours of music playback or 8 hours of video per charge.

This touch screen MP3 player gives users access to over 100,000 games, the Game Center, 700,000 apps, and a full iTunes library of songs and movies. It also features Rich HTML e-mail and a Safari web browser. 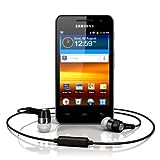 Samsung 3.6-Inch Galaxy Player (Discontinued by Manufacturer)
The Samsung Galaxy player has a 3.6" screen and built in WiFi for accessing the web without fees. Users get access to over 450,000 apps through Google Play and Samsung apps, they can enjoy their own music files, music apps, internet radio and more with the built in radio tuner. It also features dual cameras that allow users to take photos and enjoy video chat with friends. It operates with with the Android 2.3 OS, lets you keep in touch with friends vial Social Hub, provides Bluetooth capability for pairing with your phone, and even allows you to enjoy content by easily connecting to an HDTV.
Buy Now

Just as with cell phones, touch screen MP3 players will likely begin taking over the market as the hottest and most coveted devices.Touch screen technology is expected to overtake more than the world of cell phones and MP3 players. It's anticipated that computers will also benefit from it's evolution giving users much greater control. You can learn more about this in an article from The Economist.

Of course for many people improving the touch screen by way of better tactile feedback is also critical. Haptic technology is helping in this regard. You can learn more about these somewhat recent advancement in this Technology Review article.

Of course, for the blind and visually impaired current touch screens are particularly problematic. Just finding the right placement on a touch screen is nearly impossible. However, there are developers out there who are paying attention. This StarNewsOnline article talks about some of the work which may help to remedy this problem.