How to Reach Murudeshwar in Karnataka, South India

Murudeshwara, a new travel spot in South India attracting thousands of travelers. The beautiful beach, fascinating panorama and the world's second largest Shiva statue are the contributing factors for the sudden attraction of the travel folks to this place. You just stand spellbound while watching the spectacular sight of the Shiva statue and the surrounding exotic location.

The temple is built on the Kanduka Hill in Bhatkal Taluk of Uttara Kannada district in Karnataka. It is situated between the Honnavar and Bhatkal town. The location is on the Konkan coast. The nearest railway station is Murudeshwar, just 2 km away. The nearest main station is Bhatkal.

Attractions of the Temple

The name ‘Murudeshwar’ means Shiva or Eeshwara. You can find a reference to this place in Ramayana. In the temple gallery, you can find many pictures of Ravana on different occasions. You need to take the ticket to enter in. But it is worth.

The temple is dedicated to Lord Shiva. It has a 20-storied Gopura. There is a lift facility to reach the top, which gives a breathtaking view of the magnificent Shiva statue from the top of the Raja Gopura. To enter the lift, you need to wait as people love to enjoy this experience in its totality resulting in a rush.

Two life-size elephants statues in concrete stand guard at the entrance point. The tourists find time to take a snap from here. The 249 feet tall Raja Gopura is believed to be the tallest Gopura (temple tower) in the world. Sri. R.N. Shetty is the man behind the temple and the temple complex.

Features of the Statue of Lord Shiva

Amazing! No, this is not enough to describe the statue. The statue is 123 feet (37m). It is a huge towering statue and visible from far away distance. It is the second highest statue of Lord Shiva in the world. The first is in Nepal.

The statue was built by Kashinath and his associates, financed by businessman and philanthropist R.N. Shetty. We will thankfully remember the main architect and other sculptors when we pay a look at the statue.

The statue looks differently as we change our watching-location. Sometimes it seems so tall and sometimes not at all tall and so on. The mood reflects on Shiva’s face also changes at times. The statue is erected on the top of the temple on a hill, surrounded on three sides by the waters of the Arabian Sea.

Come to the back portion of the statue and pay a look at the surrounding area. You are about to forget the world on seeing such an amazing panorama. Total greenery, the vast sea and the hustle and bustle of a coastal life. All these will please you immensely. Reach the spot at evening or early morning for watching the most beautiful scenery. The statue is designed in such a way that it gets the direct sunlight so as to appear sparkling. But the proximity to the sea is costing the sculpture so dearly. The large wind and rain affected its original gold paint and one arm out of the four is seen damaged now.

The fort has got some connection with Tipu Sultan as it was he, who renovated the fort. It is behind the temple.

The beach is crowded during the evening. There are several shopping parleys and picnic joints on the coast. Plenty of eateries, amusement corners, boating, it has all the features of a popular beach. But bathing is not allowed since the area is inhabited by crabs. You can see crabs digging holes everywhere in the beach sand. Murudeshwara is lying on the Konkan route. There are several trains from Mangalore and Mumbai side to Murudeshwar. The nearest railway station is Murudeshwar. But some trains do not stop here. Then, you need to alight at the nearby Bhatkal station.

From Mangalore: Reach Honnavar through NH 206 and then through NH 17 reach Murudeshwara.

From Mumbai and Mangalore: Take NH 17 between Honnavar and Bhatkal towns.

A good number of restaurants are available catering different cosines. Lodging is limited since it is a newly developed tourist spot. The hotels of RNS group are fine but a little expensive. Cheap accommodation is available within 1 km radiance. I would suggest you stay in RNS Residence as it is so close to the prime attraction and gives you a wonderful look of the entire attraction. The hotels here price exorbitantly during the festival season like Pooja (Duserah) or Diwali.

If you love boozing, don’t worry. There are a couple of Bars too nearby to satisfy you.

What makes Murudeshwara a different experience

Murudeshwara is a new tourist spot. Its popularity is slowly progressing. The main attraction of Murudeshwara is the tallest statue of Shiva in a sitting posture and the Shiva temple on the hill surrounded three sides by the Arabian Sea. A temple on the beach is a good idea for total enjoyment. On reaching here, you will know that rather than a pilgrim center, it is a picnic spot. The surrounding lovely beach, the charming Kanduka Hill, and the total greenery may be the reason for that. I did not feel any pilgrim mood here. When asked, my friends also told the same thing.

When a temple, especially a Shiva shrine comes to your mind, the picture flashes in your mind must be that of an ancient building. But this is a newly built one and completely presents a picture of modernity. The so-called temple ambiance is what lacks here mainly. The rates of Poojas (worship offers) too are exorbitant. Nevertheless, one thing is sure the Shiva statue and the surrounding beach location will never fade from your mind. 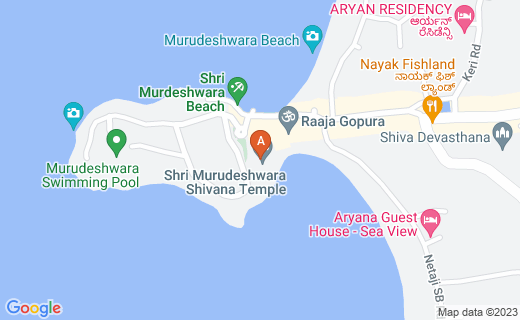