Downtown Tucson is an interesting place. Periodically it goes through periods of revitalization during which it becomes very lively. Then it seems to get forgotten again and fall into a state of quiet disrepair. Hopefully the current trend towards a livelier downtown will stick around this time. One of the great things that has come about from this trend is that people have decided to preserve and revive some of the downtown area’s historic buildings. There are a lot of neat buildings in the area in terms of both historic architecture and interesting contributions to Tucson’s history. 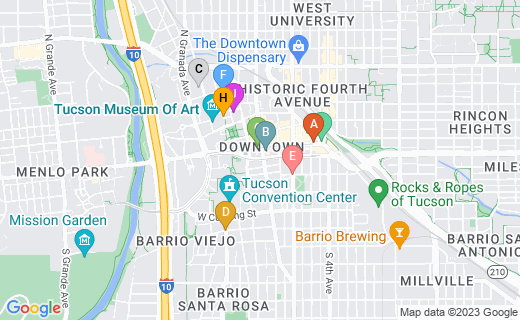 1. Bank One Building. There are not too many skyscrapers in Tucson so the ones that are there definitely stand out. Imagine how true that was back in 1929 when this first skyscraper was built in the city! It is no longer the tallest building in downtown Tucson but it remains one of the most prominent. Visitors are welcome in the lobby of the building during normal working hours.

2. Carnegie Library. This historic building opened way back in 1901. It is now home to the Tucson’s Children Museum so you can still visit it even though it’s not in its original form anymore. Originally, of course, it was a library. In fact, it was the main library of Tucson until the early 1990’s. It was designed by Henry Troast, a well-known architect, as part of the National Library Program.

3. Carrillo Intermediate School. There are several cool bits of history about this middle school that many people (including Tucson locals) are not aware of. For one thing, it was the site of the very first landing of an airplane in Tucson. That happened here back in 1912. Another thing to know about this school is that it was the home of Carrillo Gardens, which was the very first park in Tucson. And yet another interesting historic tidbit is that President Teddy Roosevelt gave a speech at this place.

4. El Charro Café. This is not only a really yummy Mexican restaurant. It is also a restaurant that has the distinction of being the oldest continuously family-owned Mexican restaurant in the entire United States! It was opened way back in 1922. The building itself was built even earlier than that, back in the late nineteenth century. The building is listed on the National Registry of Historic Places.

5. Fox Theatre. This downtown theater re-opened just a few years ago after being an empty building for far too long. The original historic theatre was built way back in 1929. The opening night was one of the biggest parties ever seen in Tucson. Many Tucson residents fondly remember going here to watch movies when they were growing up. The movie theatre closed in 1974 but is now restored and opened again. There’s both a stage and a film theater so many different fun events are held here.

6. Hotel Congress. This historic hotel is a cool spot in downtown Tucson. There is a nightclub here that a lot of locals go to for live music and dancing. There is a restaurant, a small gallery in the lobby and the hotel itself is still active. The hotel was built way back in 1919 and the original “taproom” is still there in the building. One interesting historical tidbit about this Tucson building is that infamous bank robber John Dillinger stayed here in the 1930’s.

7. La Casa Cordova. Would you like to visit the oldest still-standing residential building in Tucson? Not a problem. La Casa Cordova was built in 1848 within the walls of the Presidio Fort. It is a five-room structure built in the historic adobe style that is so popular in Tucson. It is open for viewing by the public today. It is adjacent to and part of the Tucson Museum of Art.

8. Owls Club Mansion. It is hard to miss this building if you’re driving around downtown Tucson because of the fact that it’s a pink building. It also has very interesting architecture with a Spanish Sonoran style and some interesting geometric patterns. The building was built way back in 1902. It used to be the home of the Fraternal Order of Owls, a fact that is symbolically celebrated with the sculptured owl that sits on top of the building. The building is now a private residence. Because of that, you can’t check out the inside of the building but it’s one that you can walk by and see from the outside.

9. Presidio San Agustin del Tucson Museum.The Presidio Fort that I just mentioned is one of the most interesting parts of Tucson’s history. It was an old Spanish Fort that was built to protect Spanish settlers from attack by Apache Indians. It was actually the largest fort in a string of forts that were built in the Southwest during the same time. The fort itself is now gone although historic buildings remain in the location where it one stood. One of the best ways to explore this Tucson history is to check out the museum here. It’s a hands-on interpretive center where you can learn about Tucson history.

10. Southern Pacific Railroad Station (Amtrak Depot). The railroad was a really important part of Tucson’s history. The Wild West just would not have been the same if it wasn’t for the growth and expansion offered by the railroad. The historic downtown building was create in 1907 and has recently been updated with restaurants and stores. One interesting tidbit about the history of the railroad is that famous Wild West man Wyatt Earp is said to have shot and killed his brother’s murderer right on the tracks here in Tucson. The station currently does serve as the city’s Amtrak train station. It is also a stop for Tucson’s historic trolley.