Habitat of the endangered and rare Siberian white crane and an important stop point of birds coming from the continents of Africa, Europe and South Asia and going to their breeding grounds in Siberia, Saryarka is a natural UNESCO World Heritage Site in Kazakhstan that was inscribed in the list in 2008.

In its wetlands, migratory water birds like the Dalmatian pelican and Pallas’s fish eagle can be spotted.

The epitome and most complex representation of a holy mountain in Central Asia is the Sulaiman-Too Sacred Mountain in Kyrgyzstan that dominates the landscape of the Fergana Valley and gazes down the city of Osh.

It was an important stopover for people who treaded the Central Asian Silk Roads for over 1,500 years and has been revered as a sacred mountain.

This cultural UNESCO World Heritage Site has about 17 holy places of worship, two mosques that date back in the 16th century, caves which at least 101 petroglyphs yield important clues to the past, and other historic artifacts that show the harmony of Islamic and pre-Islamic religious beliefs of people.

These venerated places are found all around the slopes of the five peaks of the Sulaiman-Too Sacred Mountain.

An archaeological site in Tajikistan that bears witness to the existence of humans in central Asia from the 4th millennium BCE up until 3rd millennium BCE is the Proto-Urban Site of Sarazm.

In this cultural UNESCO World Heritage Site, archaeologists were able to unearth ruins that serve as testaments to the proto-urbanization of the place as well as to its people’s cultural and trade exchanges with those from Central Asia, Turkmenistan, Indus Valley, Indian Ocean, and the Iranian plateau.

It is located in a mountainous region that is ideal for agriculture, nomadic and pastoralist lifestyle, and even permanent settlement.

In Akhal Vilayet in Turkmenistan, one can find one of the most important cities of the Parthian Empire that ruled a powerful part of the world from the mid-3rd century BC up until 3rd century AD.

This ancient city blocked Roman expansion and served as an important center for communications and trade.

In this ancient city, one can find the Parthian Fortresses of Nisa, a cultural UNESCO World Heritage Site that combines local cultural elements with those of Roman and Hellenistic.

Many of the archaeological pieces unearthed here have architectural, artistic, and religious importance.

In Dashoguz Vilayet, Turkmenistan is another UNESCO World Heritage Site that served as the capital of the Khorezm region of the Achaemenid Empire.

Called Kunya-Urgench, this old capital was bedecked by its rulers with structures that date back between 11th century and 16th century.

These structures include monuments, mausoleums, minarets, mosques, fortresses, and gates.

They were so beautiful that they spread to Iran and Afghanistan and even influenced those of India.

The famous town of Samarkand, a melting pot of the world, is a UNESCO World Heritage Site that can be found in the Samarkand region in Uzbekistan.

It was established in the 7th century B.C. as Afrasiab.

However, it was not until the 14th to the 15th centuries when it flourished under the Timurid era.

Also in Uzbekistan is a 2,000-year-old medieval city that became prominent for its part in the Silk Route.

Most of the ancient Muslim structures in Bukhara are still intact, including most of its monuments, tombs, and madrasas.

In this city, one can find 17th-century madrasas and the 10th-century the tomb of Ismail Samani.

Arguably one of the finest volcanic regions in the whole world is the 3.8-million-hectare natural UNESCO World Heritage Site in Russia called the Volcanoes of Kamchatka.

This site features a good number of active volcanoes of varying types, features, and beauty.
It blends well with the glaciers and the natural scenery of the place.

It has also become a home for a substantial number of Stellar’s sea eagles, brown bears, salmonoid fishes, and sea otters.

Another sprawling natural UNESCO World Heritage Site in Russia is the 3.15-million-hectare Lake Baikal, the oldest and deepest lake in the world at 25 million years old and 1,700 meters deep.

Largely because of its very old age and remoteness, Lake Baikal has become the habitat of many of the world’s freshwater peculiar faunas and has harbored a good percentage of the world’s unfrozen freshwater reserve.

It can be found in the Irkutsk and Chita regions in Russia.

The Natural System of Wrangel Island Reserve in the Chukot Autonomous Area in Russia was inscribed in the UNESCO World Heritage List for its amazing role in biodiversity.

It is the home of the highest number of Pacific walrus in the world and has a staggering number of polar bear dens.

Its waters feed grey whales that come to the area from Mexico.

It is the nesting ground of as many as 100 migratory birds, many of which are rare and endangered.

The Wrangel Island Reserve has 417 species and subspecies of vascular plants, 23 of which are endemic to the island.

It actually includes the Wrangel Island and the Herald Island.

Northern and Central Asia on the Map 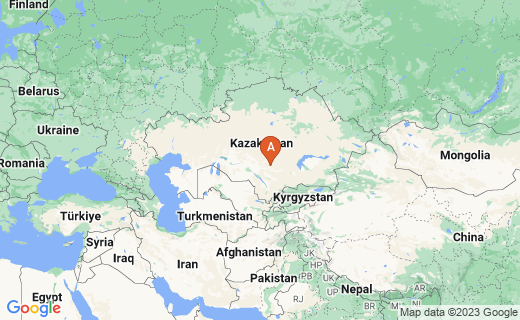