Introduction To Living In Los Angeles

For those of you that may have been discouraged about moving to the Los Angeles Metro area, do not be too dejected. Los Angeles does have its several positive aspects. I will now focus on 10 reasons why I believe it is a good idea to move to Los Angeles in spite of what has been going on in the United States with all the negative news. This list is 10 reasons that I have come up with on why someone should consider living in the 2nd largest city in the United States. I will do this list in reverse order starting with the tenth reason and working all the way down to the first reason. I have been thinking about writing this list for a very long time and I hope that my list will convince readers of all the good aspects of Los Angeles. After a list of every reason, there will be an explanation that will follow. Some of these reasons may not be reasons that people may have thought of. If after reading this article you decide to relocate here, I wish you the best of luck!

A Photo of Venice Beach in Los Angeles

Reasons 10-5 On Why Live In Los Angeles

10. The beaches in Los Angeles are numerous. Many people relocate to Los Angeles to surf at its many beaches and to swim in the water. Now this reason may or may not be at the top of your list, but if you enjoy seeing miles and miles of coastline and you want to have the chance to swim and to surf, then Los Angeles is one of the best places to do this.

9. If you prefer to drive instead of using public transportation, Los Angeles is a place you should consider relocating to. Believe it or not, I have heard some people say that they prefer to drive instead of taking public transportation. Los Angeles has what is known as urban sprawl. It contains many different cities with each of them being spread out all over the county. This urban sprawl makes it challenging to go long distances with a bus. For car lovers, Los Angeles is one of the places to be. But please be aware that traffic in this metropolitan area is really high. There is often times rush hour traffic. But as I said, if you enjoy driving in your car, this is the place to be.

7. If you want to get a job in the entertainment industry as an actor, producer or director, Los Angeles and Southern California is the best place to be. This is where Hollywood is and where some of the nation’s biggest movie studios are. It is competitive to get into the movie industry but if your heart is set on it and you are brave, this is the best place to try and make it as a movie star. I wish everyone who wants to get into this industry the best of luck. Note: you may even meet a celebrity once you move here. Some of us have been fortunate to have that happen to us.

6. Los Angeles is a great place in my opinion for those who are single particularly single men. You can find someone to date or hook up with. But to get married in Los Angeles, it is going to cost you lots of money because of the high cost of living. If you want to remain single and explore your options Los Angeles is pretty good. This brings me to my next reason to live in Los Angeles.

5. Los Angeles has people that live here from so many different countries in the world. I have friends from places such as Argentina and South Korea. This ethnic and cultural diversity is what has allowed me to find out information about so many different people. It has increased my knowledge of people from other countries. As a person who was born to parents who are not originally from the United States, I am blessed to be surrounded by people of all different backgrounds. In fact, it is estimated that there are over 200 languages spoken in the LA area (ARON 2013).

A Map of Los Angeles And Surrounding Areas 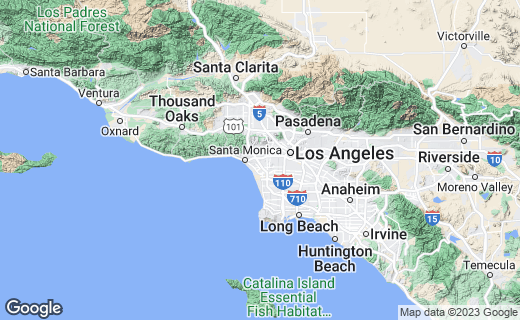 Do you like living in the Los Angeles metro area?

2. The Lakers are in Los Angeles of course. I remember watching Lakers games starting around 1986. That was the period when Pat Riley was the head coach and that team had players such as Magic Johnson, Byron Scott and James Worthy. At that time, I think that the National Basketball Association or NBA for short was at its best because the games were exciting. Even today, the Lakers remain one of professional sports’ best franchises. This is because of the enormous success they have had over the years and continue to have that success even now. This is one of the reasons I continue to want to stay here and keep those memories alive. If you want to see a sports franchise that is dedicated to winning championships consistently, Los Angeles is one of those places. Note: since the end of the 2013 NBA Playoffs and especially since the retirement of Kobe Bryant, the Los Angeles Lakers are struggling as a team having missed the playoffs for three straight years.

1. And the final reason to move to Los Angeles is if you want to experience mild to warm sunny weather for most of the year. This is the reason at the top of the lists of most people. During the winter when many areas of the United States are experiencing snow and cold temperatures, Los Angeles residents will see temperatures in the 60's and 70's with plenty of sunshine. It does get chilly at night in Los Angeles County however. So a coat or some warm clothes is necessary. If you want to experience sunny weather most of the year with very little rain and low humidity, Los Angeles will be a great fit for you. If on the other hand, you want to experience the true change of seasons with more precipitation, Los Angeles is not for you. I personally think that while the climate of Los Angeles County is pretty decent in the winter and spring, it is not the best in the United States. But that is a different topic for a different day. I do think that sunshine is good to a point. But I also think that variety in the weather does have its positive aspects though. Los Angeles has nicer weather than New York City for instance, however, New York is a much more exciting city. But weather is the main reason why so many people choose to relocate to this area.

Conclusion About Living In Los Angeles

The purpose of this article was to inform readers about some of the positive aspects of Los Angeles. It is only the views of one person and the objective was to look at the good sides of the 2nd largest city in the United States. I probably could have come up with more than 10 reasons but I decided to just narrow the list down to 10. I am optimistic that this article will lift the spirits of people who may be feeling that there is not much to look forward to in Los Angeles. But there are things to look forward to if a person will take the time to see them.

One Moment That Defines Los Angeles And Its Greatness