10 Reasons to Not Live in the Los Angeles Metropolitan Area

Introduction To The Topic: Why Not To Live In The Los Angeles Area

Living in Los Angeles or Southern California does have its advantages. Life is so much more than just mild to warm sunny weather most of the year. You still have to make sure to be able to support yourself financially. Here is a list of 10 reasons why people should not be in such a rush to move to the Los Angeles area. The list of these ten reasons is not in any particular order of importance. This article is not meant to focus exclusively on negativity and gloom, but to paint as realistic of a picture of living in the Los Angeles area.

A road map of the Los Angeles area 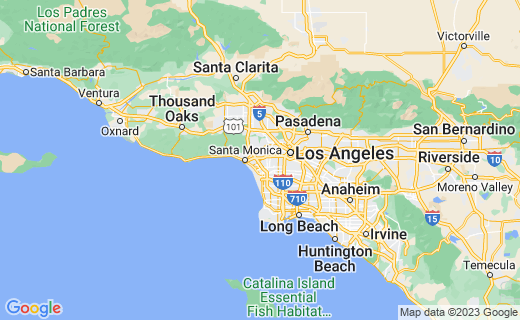 A City Surrounded by Smog

6. There is too much smog here and the air is too dry. Los Angeles is still ranked as one of the large US cities with very poor air quality. When I get off the bus in my area, I frequently am able to smell exhaust fumes from the vehicles here. The air really isn’t fresh and clean unless you go to one of the coastal areas in Southern California. I believe that it is because of this pollution that I have allergies and I frequently sneeze. I also have a runny nose on top of that. I have been told that the air quality in the Los Angeles area is better than it was in the 1980 s. That may be true as I haven’t checked that for accuracy, but that’s not saying much. It may be better than before but it is far from clean. The dryness in the air leads to dry skin and it can also dry your throat and eyes out. And it is possible to get a nosebleed. As a side note, Mediterranean climates cause problems for those of us that have seasonal allergies. The American Lung Association released its State of the Air report for Los Angeles County in 2015. Some of the statistics that you are about to see are staggering. For instance, the air that we breathe in Los Angeles County is said to affect an estimated 10,017,068 people (State of The Air 2015 n.d.).

7. There is very little rain in the Los Angeles area in my opinion. Rain is great for the air because the rain will clean up the air. Rain is also good for the plants as it makes the area green. Los Angeles does have lots of sunshine throughout the year which is great for those who want to see that. I used to love the constant sunny days when I was growing up. But as I got into my 20's, I realized the benefits of rainfall. When you travel to and see other places, your mind opens up and you begin to realize that there is much more to life than dry and sunny weather for over 300 days a year. The rain and damp weather found in places such as Seattle, Washington does not exist in enough quantity in Los Angeles. I have discovered that I feel better physically when it is cold and it rains. My allergy symptoms and sneezing and stuffy nose are much better when it rains here in LA. Also, my skin is in much better shape in the damp weather. And you can also breathe better in the damp weather because the air is cleaner as a result. Note: the overall weather may be better in Los Angeles than Chicago or Des Moines but be prepared to really pay some serious cash if you want to live out here.

8. Entertainment costs too much money in Los Angeles. It may cost you up to $50 for a ticket just to go and see a concert in one night. And going out to bars and clubs gets expensive too with the cover charge and all the drinks that people spend their money on.

9. It is difficult to make and keep friends here in Los Angeles. Due to the sprawl of the metro area where people are driving from place to place combined with the stress of living in the LA area, it is no surprise to me that people really don’t have time to spend with each other. I think that some of the stress that people have in their lives is created by them. Especially if you do not have a car in Los Angeles, it is tough to do anything because of the way this city is spread out as was discussed in one of the previous reasons. And especially if your friends are married, you will not be able to reach them often. All you will get is a voice mail or an answering machine. If a person is a true friend, they will make the effort to get back to you in a reasonable amount of time. Some people in Los Angeles cannot be trusted unfortunately. Note: the article does not say that ALL people in the LA area are unreliable. But because of the nature of LA being an entertainment kind of city, there is a certain character that many living here develop.

10. And the final reason why I would not recommend that people make the move to Los Angeles is that jobs are very difficult to find here. The unemployment rate here in California is really high. At least that was the case when I first wrote this. I think that you have to know people in Los Angeles to get a job or you have to just be lucky. Lots of states in this country are having economic trouble but California has been hit hard by the economic slowdown.

Conclusion About 10 Reasons to Not Live in Los Angeles

So there it is. That is a list of 10 reasons why people should not be in a rush to move to Los Angeles. As I stated earlier, there are obvious benefits to living here in Los Angeles, but I suggest that anyone who wants to move here should think about it long and hard before they do it. Making a move to Los Angeles from another part of the country or the world is not an easy task. I don’t recommend moving to the Los Angeles area based on what you see in the movies or on television. If you move to Los Angeles, you still need to figure out how you will support yourself financially. Are you planning on getting married? Are you planning on having children? Do you want to rent an apartment? Or is your goal to buy a house? These are some of the things that I suggest people think about long and hard before they make a move to the Los Angeles area. Life here is very different than what you see on the television. In other words, please do some extensive research before deciding to move here.