Western Asia, the cradle of the world’s earliest civilizations, has a substantial number of ancient and glorious sites that have been inscribed in the UNESCO World Heritage Sites List.

Many of these sites are products of empires that rose and fell in Western Asia: Assyrian, Babylonian, Achaemid, Seleucid, Parthian, Roman, Sassanid, Byzantine, Umayyad, Abbasid, Safavid, and Ottoman.

Moreover, Western Asia is the birthplace of the world’s greatest religions: Christianity, Judaism, Islam, and others that profess faith to only one god.

Thus, there are many places in Western Asia that have outstanding religious significance for people from across the world.

Below is a list of the ten most splendid UNESCO World Heritage Sites in Western Asia.

Established in the 3rd millennium B.C., the ancient city of Damascus is one of the oldest cities in Western Asia.

It became world-known when it flourished as an important hub for the manufacturing of early swords and lace.

In this UNESCO World Heritage Site in Syria, one can find about 125 monuments that date across several historic periods.

Arguably the most notable of these monuments is the Great Mosque of the Umayyads, built in the 8th century in an Assyrian sanctuary.

Populated for the last 2,500 years is the old Yemeni city of Sana’a, nestled in a mountain valley at the height of 2,200 meters.

Sana’a is historically important for it was a center of Islamic propagation in the 7th and 8th centuries.

Presently, people can still see structures – all predating 11th century – that serve as testaments to the religious as well as political importance of Sana’a.

These structures include 6,000 houses, 103 mosques, and 14 hammams. All across this beautiful UNESCO World Heritage Site, there are also tower-houses built with earth.

Legends have it that the purple dye was first made in Tyre, a city in Lebanon that has been inscribed in the UNESCO World Heritage List.

Legends about Tyre do not end there.

This Lebanese city is said to have yielded great powers over the seas and founded colonies in Cadiz and Carthage.

Perhaps one of the most well-known and recognizable archaeological sites in the world is Petra in Jordan, a crossroads of ancient people travelling from Egypt, Arabia, Syria, and Lebanon.

Petra is located between the Red Sea and Dead Sea.

It is carved into a rock and enclosed by mountains perforated with ancient routes and gorges.

As an old crossroad of thousands of people, Petra took in architectural influences from Eastern and Hellenistic traditions.

A city that survived fierce assaults by the Romans in 116 and 198 A.D. is the UNESCO World Heritage Site of Hatra in Iraq.

Hatra has massive walls that are very high and thick as well as fortified by towers.

This city is reinforced by structures built with design influences from the Parthian Empire.

It is the first capital of the Arab Kingdom.

Hatra today has temples that attest to its remarkable past – temples that blend Hellenistic and Roman styles of architecture.

Formerly known as Hegra, Mada’in Saleh in Saudi Arabia is the largest discovered place of civilization of the Nebataeans located south of another UNESCO World Heritage Site called Petra in Jordan.

Mada’in Saleh boasts of 111 tombs of great sizes, about 94 of which are ornately decorated.

It has water wells, testaments to the hydraulic genius of the Nebataeans.

It also has cave drawings that pre-date the period of the Nebataeans.

Many of the architectures in Mada’in Saleh were built between 1st century B.C. and 1st century A.D.

An exceptionally holy site for Jewish, Christians, and Muslims is Jerusalem, a UNESCO World Heritage Site in Western Asia.

These three religions identify Jerusalem as the site where Abraham made his holy sacrifice.

It has about 220 historic monuments.

The Church of the Holy Sepulchre is the location of Jesus Christ’s tomb.

The Wailing Wall draws the line for the housings of people belonging to several religious groups.

The Dome of the Rock is the most recognizable structure in the city, with its ornate geometric and floral patterns.

8. Qal’at al-Bahrain– Ancient Harbour and Capital of Dilmun in Bahrain

The most loaded archeological site that tells about the ancient civilization of Dilmun is the Qal’at al-Bahrain in Bahrain that was mentioned in old Summerian texts.

This UNESCO World Heritage Site was the capital of Dilmun.

As the capital, Qal’at al-Bahrain has layers upon layers of continuous human occupation that yield pieces of evidence of religious, military, commercial, trading and civilian structures.

About one-fourth of the site has been excavated, leading to expectations that there are more places that await discovery.

Perhaps the most impressive of the digs is the Portuguese fort or qal’a that gave the place its current name.

Thus far, evidence shows that the place was occupied from 2300 B.C. to 16th century A.D.

The fortified oasis of Bahla in Oman was inscribed in the UNESCO World Heritage List for it is a testimony to the great influence of Banu Nebhan, the leading tribe in the region that flourished between 12th century and 15th century.

Bahla Fort contains what is left of an ancient fort made up of massive walls and towers created from unbaked bricks and stones.

An incomparable symbol of the kingdom of Israel of long time ago and the courage of the Jewish people in the face of a Roman attack in 73 A.D. is Masada in Israel, the UNESCO World Heritage Site located in the Judaean Desert.

Masada was built as a palace complex by Herod who reigned from 37 B.C. to 4 B.C.

The complex has camps, ramps and fortifications that comprise a complete Roman siege structure.

Having a great view of the Dead Sea, Masada is a natural fortress with imposing splendor.

Western Asia on the Map 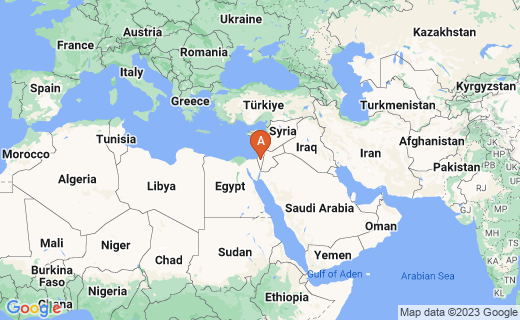