Marcy loves to share her wandering adventures, including her home state of Texas, and the many places she's traveled.

Sixth Street is Big in Austin

100 Things to Do in Austin Before You Die 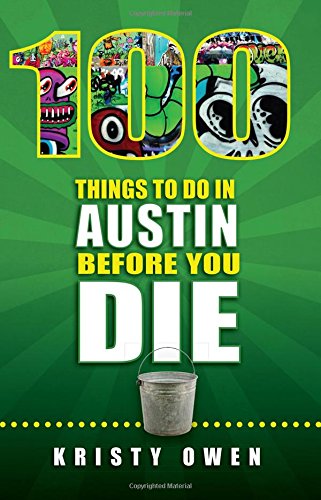 Flying to Austin? IT Luggage is the Lightest Luggage Made

A trip to Austin wouldn't be complete without checking out Sixth Street, which is sort of Command Central for Austin's reputation as the Live Music Capital of the World. The bars and restaurants are too numerous (and changing) to name, but here are a few insider tips on enjoying your visit.

Sixth Street is not that long; only about 5-6 blocks of real action. If you have a car, you can easily park under the I-35 bridge or on a side street and walk the entire strip back and forth. You'll hear live music from many doorways and see plenty of examples along the sidewalks that explain our Keep Austin Weird motto - vendors, dancers, jugglers and street musicians, to name a few. There are a few decent restaurants along the way, but there's plenty of fine dining elsewhere in town, too.

Also on Sixth Street, a block or two west of I-35. Don't miss this great ensemble show! Esther's Follies was started more than 30 years ago and is a beloved tradition in Austin. Think of Saturday Night Live and a comedy club, then add the 'Weird' factor and you get the picture. Esther's has live performances on Thursday, Friday and Saturday nights (two each on weekend nights). This talented troupe creates and performs original song parodies and skits to spoof current events and politics. They also interacts with the audience like you wouldn't believe (watch out; you may end up on stage!). The bar offers mixed bevridges and soft drinks. Esther's is located at 525 East Sixth Street, Austin, TX 78701. Call for reservations: 512-320-0553.

Austin's answer to SoHo in New York - this funky stretch of South Congress, which has an entirely different feel from Sixth Street, is full of interesting shops, good restaurants and the ubiquitous food trailers that have begun populating Austin in recent years. The hot-spots start a few blocks below Lady Bird Lake (formerly Town Lake, which is a river running through town); you can walk the stretch for several blocks and enjoy the ambiance of TexMex eateries, eclectic stores and local color. If your trip is early in the month, drop by for the evening fun of First Thursday and enjoy even more street vendors and musicians.

West of Congress Avenue (where the Sixth Street action sort of ends) and a bit to the south, you'll find bars and clubs that cater to a bit older group than Sixth Street attracts (although visitors of every age should do Sixth and Esther's at least once). Shops in this area are more upscale and the restaurants and microbreweries are geared for the Downtown office crowd that wants to relax after getting off work. You can walk to this area from Sixth Street - just go a few blocks south on Congress and turn right (west) around Third or Fourth street.

Yes, Austin is just as great as you've always heard - I've lived here for more years than I care to admit and I've never stopped loving it. Whether you're headed here for our famous SXSW (South by Southwest) music, film and interactive festival, or a business trip, or just to hang out, be sure to see the places listed here. I've included treasures right in the middle of town as well as a few worthwhile side trips.

If you're headed here, you probably already know about the music scene. But maybe you'd like to know what those of us who live here like to do around town. Besides Sixth Street and SoCo, check out the history in the city and a few nearby landmarks, if you have time.

Here are some places 'insiders' in Austin hang out.

The beautiful limestone Texas Capitol is located at 11th and Congress (you can see the lights from Sixth Street) and is worth a short visit or tour. Constructed in 1888, the building was remodeled in the early 1990s and its new underground extension was designed to complement the woodwork and marble of old architecture. The House and Senate chambers, with their elegant paneling and aura of political tradition are open to the public; if the Legislature is in session (odd numbered years, from January through May), you'll need to view them from the gallery on the upper level. The biannual Legislative Session in Texas is a show all its own, full of antics such as the Great Killer Bee Stand-off several years ago, when a group of state senators hid out in the garage of an executive assistant for several days in order to kill the quorum. Typical Texans, they celebrated their coup by wearing lookalike T-shirts labeling themselves the Killer Bees of that Session.

As you walk through the huge rotunda, you'll notice portraits of the governors of Texas throughout the years. Read up on Ma and Pa Ferguson for a little taste of one of the more colorful eras in Texas political history. On the upper levels are the balconies and hallways where a dance scene from the movie, Best Little Whorehouse in Texas was shot (and yes, that little house really existed, in LaGrange - about 60 miles southeast of town). If you're hungry for lunch or a snack, the Capitol Cafe (lower level of new wing) has a good selection ranging from a soups & a salad bar to hot entrees and burgers. Take a seat in the dining area and look around - you never know who you'll see walk through the doors!

Things to see and do around Austin 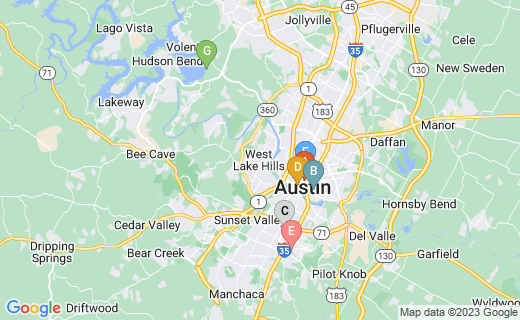 Other Favorite Landmarks & Spots in Austin

Visitors often flock to some of the bigger, more commercial dance scenes here, but if you want to see real Western dancing, with real Country music and even an authentic cowboy or two, get thee to 3201 South Lamar, park in the dirt and gravel lot and see what Austin used to be like a few decades ago. The 'Spoke' has a real wooden dance floor, surrounded by raised seating areas with wooden tables and splintered walls that have seen many a midnight Waltz Across Texas or Late Night Benediction. If you want a truly Texan-style chicken fried steak with fries, the restaurant just inside the door has some good fixin's. For more information, call 512-442-6189.

Although you can no longer get to the top observation area (it was closed off a few years after the tragic Charles Whitman shootings and several suicide jumpers), you can sometimes go up almost as high, if tours are offered that day. Either way, the Tower and campus are worth seeing in the daytime as well as at night. The campus area starts at Martin Luther King Boulevard (formerly 19th Street, for those who like to count numbers) and the Tower is a few blocks north. Take a walk through the beautiful grounds (aren't all campuses absolutely beautiful!); don't miss the historic fountain and statues at the steps below the Quad area in front of the Tower and be sure to see the other statues and fountains that dot the park-like grounds. Stroll along Guadalupe Street (The Drag) immediately west of the campus, just so you can say you've been there. At night, the Tower will be a great photo op to commemorate your trip. For special occasions (such as championship games), the top or sometimes the entire tower will be bathed in Burnt Orange.

See the Sunset at the Oasis Restaurant in Austin 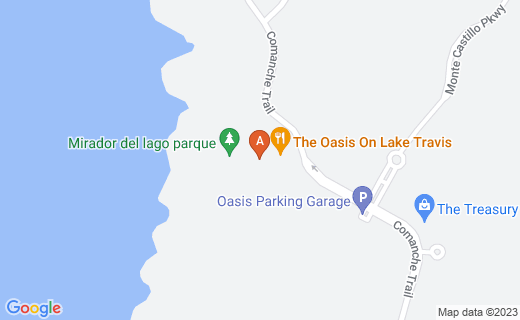 The Oasis Restaurant in Austin

Rather than Midnight at the Oasis, you'll want to hit this legendary spot at sunset. Perched high on a bluff overlooking Lake Travis, the Oasis is the ultimate spot for a late afternoon meal or drink. The original building (which had many add-on decks) burned a few years ago, but the owners rebuilt it with even more features for diners and improved accessibility. The restaurant has multiple decks at varying levels going down the bluff, all with spectacular views of the lake below and hills beyond. Sunset is an actual ceremonial event here - a bell rings as the sun dips below the horizon, and diners are treated to vivid orange and red waves shimmering on the lake as it slips out of sight. Located at 6550 Comanche Trail, Austin, TX 78732; 512-266-2442.

Check out the Oasis for a beautiful sunset

There's plenty to do right in the middle of Austin, but you're missing out if you don't visit a few spots around Central Texas. Here are just a few to whet your appetite.

There are several easy Central Texas Day Trips, all within an hour or two's scenic drive from Austin.

If you've got kids along for the trip (or if you're still a kid at heart), there are plenty of attractions in Texas for children.

Other nearby spots to see 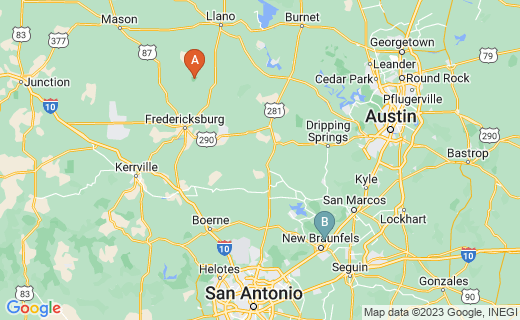 If you want to see a landmark that as big as, well, as big as Texas, take Highway 290 west from Austin and follow the signs for Fredericksburg (a historic German town town, with great food). Take Route 4 for a few miles, and after rounding a corner or two, a massive behemoth of rock (425 feet high, covering 640 acres) will pop up before you. There's a visitors' center and campground in the park at the base of the rock where you can see displays describing the rock's formation and history (it was a sacred place to American Indians) and buy a T-shirt if you want. If you're hardy and full of energy, park under a tree so the car won't get hot and climb the rock (yes, you can do it - I've done it several times!).

Pronounced "Green," like the color, this charming town is just down the road, about 40 miles south of Austin. Gruene is one of the many too-cute-for-words Texas towns that capitalizes on its quaint looks and darling little shops. Known for its water tower (a landmark), some great little restaurants and antique haunts, be sure to see Gruene Hall, where you can hear some of the best C&W and other artists in the world perform live sets.

If you go during daytime off-hours, you can actually visit its authentic saloon in peace and enjoy a cold whatever-you-like-to-drink at a table in front of the bar, which has a real foot-railing, where you can rest your boots. From Austin, go south on I-35 and take the New Braunfels exit. Just follow the signs & look for the water tower - they'll be waiting for you with a cold one.

We really do say "Y'all" here, even if talking to just one person. The plural of y'all is "All y'all" when addressing a group.

Come and hang out during SXSW, or the Austin City Limits Festival, or just for fun. There's plenty to see in Austin and Central Texas, but these highlights should give you some good ideas on what to do when you're here, and for your next visit, and the one after that, and the one . . .