Penang Island of George Town, Malaysia is considered both as an island and as a province. This place stretches along the Northwestern side of Malaysia. Many tourists visit the place because of its beautiful beach side view, rich history and abundant species of floras and faunas.

The Historical Places and Tourist Attractions in Penang Island of George Town, Malaysia

1. Auto City Juru
The Auto Citi Juru is a famous place where people can find entertainment establishments, restaurants and shops. The place adopts an eco-tourism concept.

3. Citi Hall of Penang
The Citi Hall served as headquarter of Penang Island City Council, which was built in 1903. A monument was built in the place, in honor of the World War I fallen soldiers.

4. Clan Jetties
The Clan Jetties is hometown of dock workers, fishermen and traders of the area. This traditional houses were built along the Weld Quay during 19th century.

5. Escape
The Escape is an outdoor playground brought to Malaysia by a famous international theme park designer, Penangite. It opens from 9:00 am to 6:00 pm daily.

Did you know that the Penang staple street food is a Noodle?

9. Little India
The Little India is a small area of Indian immigrants in town of Penang. One of the best place to visit where tourists can enjoy Indian cuisine, goods, music, spices and other stuffs.

11. Penang Bridge
The Penang Bridge was opened in 1985. It served as a link between Penang Island and Mainland Malaysia. It also became the site of the annual Penang Bridge International Marathon.

13. P. Ramlee’s House
The P. Ramlee’s House is a landmark that commemorates P. Ramlee. He was an actor, comedian, composer, film director and singer. The house opens from 10:00 am to 5:30 pm during Tuesday to Sunday.

Did you know that there are some beaches in Penang that shows signs of banning ladies to wear swim suits?

16. Suffolk House
The Suffolk House was built in 1780 by Captain Francis Light. Its Anglo Indian architecture mansion features was then recognized by UNESCO. Today, it was already been converted into an upscale restaurant. The house opens for guided tours from 10:00 am to 6:00 pm daily.

18. The Top
The Top is a one stop tourist destination, which features Jurassic Research Center, Rainbow Skywalk and Observation deck. Also offers a fascinating 360 degree view of the island.

19. Town Hall of Penang
The Town Hall served as a social venue of Penang’s elite society way back in 1880s. The building has the most elegant view of classic colonial. Another attraction within the area is the beautiful fountain presented in 1883 by Koh Seang Tat. The film Anna and the King took some shots in this location.

Penang island is a very simplest city of Malaysia. Despite of it, the place is very rich in history and culture. Visitors can easily see all of these by just seeing the buildings and the other structures of the island. It is highly guaranteed that all attractions as mentioned above are wonderful places to visit! 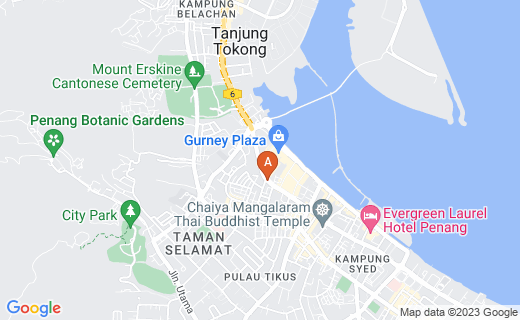 The Northwest State of Malaysia

Other Must Visit Places in Asia