I had 24 hours in Singapore. This is what I did to make the most out of my limited stay. It was a blast.

Singapore is an independent country, city, and island. Not to overkill the cliché but Singapore is a melting pot of race, religion, and creed but most speak English. Though the country is only 277 square miles, it packs a lot of people. The population is about 5.5 million. Guam, a similar size island in the Micronesia, has less than 200,000 people. Singapore is a wonderful place with great public transit, friendly, approachable people, and unforgettable sights.

On May 9th, 2014, I knew I was going to be "stuck" in Singapore. I planned it that way. I've been to Singapore plenty of times in the past but I never made plans to see anything during those visits. I was young and clueless and only interested in partying and going to the beach and these visits lasted almost a week at a time. Now that I'm older, I wanted to sightsee and check out what I missed out all this time.

I researched online the Mass Rapid Transit (MRT) to see what part of the island it went to. I made a short list of things I wanted to do and researched how to reach the destinations via MRT.

I only had 24 hours on the island minus 6 to 8 hours for sleep, depending on if I wanted to stay out a little later or crash in early. I definitely wanted to go to Sentosa Island, check out the hype of Marina Bay Sands, do a little shopping, eat some local food, then bar hop on Clarke Quay (There is still that young, clueless guy in me that loves to party; Never be to old to party or rock, kids!).

Where I Wanted To Go 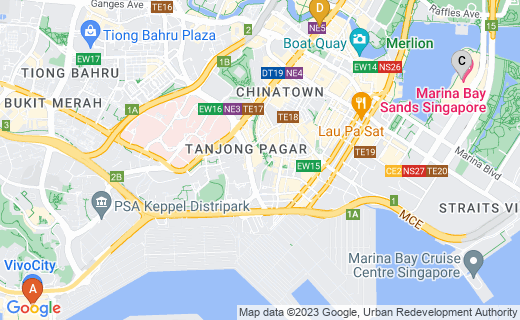 Many landmarks and tourist spots to be seen here

Place to see most recognizable landmark of Singapore

Before I arrived in Singapore, I made plans to map out what I would like to do and where I wanted to go. Matching the MRT map to a road map of Singapore, I pinpointed my desired stay at a budget hotel called Fragrance Hotel Riverside, a hotel that was just a quick walk to Clarke Quay and an MRT station.

According to the MRT Blue Line, it is a straight shot to Sentosa Island (which is somewhat deceiving but still the closest to the separate island. I can also transfer to the Red Line to reach Marina Bay. Riverside seemed like the perfect in between spot. Twenty four hours? Lets make it happen.

Changi Airport is a pretty scenic, comfortable and helpful for an airport. If you get a chance to look around, definitely take a quick tour of the airport for some photo ops.

When I touchdowned at the airport and made it pass customs and security, I easily found a queue for the taxis. I like Singapore taxis a lot. They are closely watched and regulated by the government so there is no shady business. Taxi drivers must use the meter, if they are ever caught not using it, there is a hefty fine. The fares are very affordable and compared to other parts of the world, can be considered cheap.

My driver got to my hotel rather quickly. Fragrance Hotels are well known throughout Singapore as a place for a quick stay for a cheap price. I preemptively reserved a room at Fragrance Hotel Riverside a few nights before on their website and checking in was easy. The hotel was pretty cramped and tight but nothing I could not adapt to. My room was really small and for the price of $120 US (so much for a budget hotel), I was kind of shocked but it was the best deal and location that I could find. All I wanted was a place to sleep, and it had a bed, TV, AC, and bathroom so I was fine with it. I was basically just using it as a locker to store my stuff and a crash pad. One thing I thought was a plus though was its roof pool with a view.

MRT is Your Friend

Clarke Quay is just a short walk through an overpass from my hotel. There is a decent size mall with a variety of restaurants that can appeal to anyone's taste buds. I looked around Clarke Quay before I hopped on the MRT inside the mall and it looked like there would be something going on that night. Most likely there is something that goes on at Clarke Quay every night.

I would return to Clarke Quay later that night but first I wanted to sightsee Sentosa Island and Marina Bay. I found the Blue Line inside the mall and it only cost me less than $2 US to HarbourFront. The subway got me there fairly quick, about 20-30 minutes. The stop at HarbourFront was under the VivoCity Mall which was surprisingly a huge mall.

At VivoCity, there is lots to see and do. If you are a mallrat this is a mall that caters to you. Apparently, there is a monorail near the Food Republic on the 3rd level that can take you to Sentosa Island. If you enjoy a clubbing nightlife (not my style; I prefer to bar hop), there is also a hot clubbing spot called St. James Power Station. If you're adventurous and have a little more time, you can take a ferry to Batam Island, a resort island getaway. The ticket booth for the ferry is located at the HarbourFront Centre, which is connected to VivoCity.

I didn't have time to do any of these, so I opted to just walk the boardwalk to Sentosa Island. Once you reach the island by foot, there is a fee of $1 Singapore Dollar per person. It has to be a coin.

So Expensive and Nothing TO See Actually?

Let me forewarn you, Sentosa Island is a tourist trap (in the same vain as Disney World is a tourist trap) but it is still worth seeing. You don't have to spend money if you don't want. There are lots of things to see. The part of the island I checked out had Universal Studios, Sentosa Merlion, and Lake of Dreams. Other parts of the island is a decent beach and a luxury resort and even a casino. I wished I got to check out the casino but I didn't have enough time.

Sentosa Island has a lot of photo opportunities to act like a tourist. There's numerous neo pop art created by Brazilian artist Romero Britto. There's a mechanical art / fountain called Lake of Dreams. There's a 100 ft. tall Sentosa Merlion. There's a huge rotating Universal Studio World logo. And so many more. If you are a selfie fanatic, there are plenty of opportunities to take a selfie.

After I spent a few hours enjoying the sights of Sentosa Island, I headed back to VivoCity. I shopped around and bought a few things since it is a huge mall and I didn't want to come back home empty handed. I hopped back on the MRT to take a much needed rest before I headed back out to check out my next item on the list, the Marina Bay Sands.

After a re-energizing nap, it was already getting dark but I decided to walk again instead of taking the MRT Red Line to Marina Bay. It was nice to take a walk in the city. I'm from a small town so a big city walk was completely awe-inspiring to me. I used Google maps to find my way to Marina Bay Sands. I knew I wouldn't be able to actually go inside the hotel but I did want a good look at it. A great view of the infamous hotel is across the water from the Esplanade. Another great view of the hotel is from the Merlion Fountain. If you have money to burn, you can stay at the hotel for as little as $350 US and take a look around the hotel. Apparently, the view from Skypark (the ship part of the hotel) is jawdropping. There is a rumor that if you spend at least $50 US in the restaurant inside, you can also take a tour of the hotel. But seeing it from the vantage point of the two references was still a great time to relax and take in the night life of Singapore. There are plenty of eateries and activities at these two vantage points as well.

Pissing the Night Away

Once I got my pictures of the colossal hotel, I walked back to Clarke Quay and partied the night away. I first went to Hooter's to have a few drinks and some hotwings. It has been a while since I been to Hooter's and I remembered they had one at Clarke. Honestly, I wasn't impress with the girls or the service but it didn't ruin my night. Then I went to a couple bars that played live music. I can't remember there names but I had a good time there watching people rock out (like I said, you're never to old to rock or party).

Then I went to an outdoors bar that I wish I could remember the name but to the life of me, I can't. This bar had three young women working there and they were great to talk to. What surprised me about them was they didn't enjoy living in Singapore. They would rather be somewhere else, a different city and different country. I told them I wish I lived in Singapore because I think the country is awesome. One thing I've learned throughout all my travels, the grass is always greener on the other side of the fence.

Later that night, there were some Austrian people who were also on a holiday I became acquainted with. This bar stayed open later than the other bars and we all were drinking past 3:00AM. These Austrian folks were pretty chill and good people. They even invited me to go with them back to there hotel with the casino underground (I guess anything can happen when go with the flow) but I had to call it a night because my flight was going to fly out in 8 hours. All in all, I made the best I could with my 24 hour layover in Singapore and I would definitely do it all over again because this country/city/island is a damn fine (no pun intended) place.

Other Recommended Places to see in Singapore

Below are other attractions I may have not mentioned but seemed like awesome places to check out:

Gardens by the Bay - Never been here but it looks amazing

Ultimate Drive - Never been here but allows you to drive Supercars

Buddha Tooth Relic Temple and Museum - I've been here and it is a peaceful, inspiring temple