Fun For The Family

Chippewa Lake Amusement Park (1878-1978) was one of the first entertainment parks built in Ohio.

For more than 100 years, this lovely amusement park entertained the community, and provided employment for many in the area.

This site is dedicated to preserving the links and history of the private park on one of Ohio's largest natural lakes.

The best way to learn about the Chippewa Lake Amusement Park is to first learn how the whole idea of amusement parks came about. One of the best sources of information I've found about the history of amusement parks outside of books, diaries, and antiques, is a documentary called, "Welcome Back Riders."

Swashbucklers Studio composed a half hour video that tells the story of how amusement parks began with actual footage and photos from the era in which they were built. The music playing softly in the background are the original theme park songs which includes the rarely heard, "Chippewa Lake Park Waltz" written in the early 1900s.

The History Behind Andrew's Pleasure Grounds

Chippewa Lake Park was founded by Edward Andrews, and for awhile was called, "Andrew's Pleasure Grounds."

According to Wikipedia, In 1875, Edward Andrews organized a picnic ground and beach under the name, "Andrew's Pleasure Grounds." The park operated with some success, but its condition deteriorated. After the addition of a steamboat and the park's first roller coaster, the amusement park was brought to life. However, the park's first roller coaster had to be manually pushed up the track following each ride.

Mac Beach, acquired Chippewa Lake in 1898 and improved the park immensely. He also placed a ban on liquor sales. Mac's son, Parker Beach, managed the park during its boom years, the roaring '20s. During that time, the first modern coaster was built at the park, designed by Fred Pearce. Originally named the Big Dipper, it became better known as simply 'The Coaster'. The park also featured a live band-stand seven nights a week. 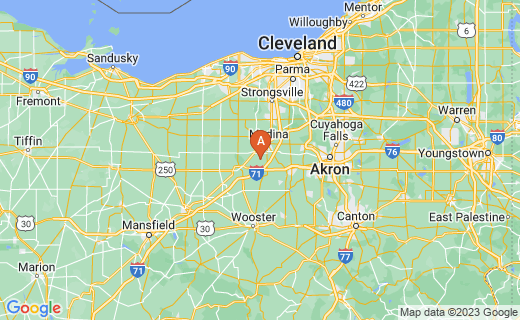 In 1969 Chippewa Lake Amusement Park was acquired by Continental Business Enterprises. The company did very little (nothing) in ways to improve the park or promote it. At the time the company utilized the park more for rock concerts than a family destination spot.

Although I do not know much about the history of the Chippewa Lake Starlight Ballroom, in its heyday the ball room was used as a source of formal dance.

October that same year, the Starlight Ball Room caught fire and was never restored, and if my memory serves correctly, the ballroom was officially closed in 1976. In 1978, less than three years after the ball room fire, Continental Business Enterprises blamed poor attendance on competition from Geauga Lake and Cedar Point and literally closed the gates, and left the park abandoned.

After the park's closure in 1978, the land the park was situated on was left largely untouched. By the year 2000, large trees were growing through rides like the coaster, the park's Ferris wheel, and and other rides. Several buildings had collapsed or been damaged by the effects of the elements. On the afternoon of Thursday, June 13, 2002, the Chippewa Lake Park Ballroom burned down.

Several other buildings had suffered the ballroom's fate, including the hotel, arcade, fun house, peanut stand, and maintenance building, all of which had been damaged or destroyed by fire. However, other rides and structures still stood, in various states of disrepair. These included the Big Dipper (Coaster), the Wild Mouse coaster, the Little Dipper coaster, the Tumble Bug, and the frames of the Ferris Wheels and Flying Cages. Most other buildings across the park were in various states of collapse due to 30 years of neglect by this time.

The End Of Chippewa Lake Park

Chippewa Lake Park Inside Out

Something About The Amusement Park Coaster

2009 View Of The Rollercoaster of Chippewa Lake

Chippewa Lake Before And After

Something About Chippewa Lake, Ohio

In the early days of our country, the Chippewa Indians were native to this part of the country, along Lake Erie and Lake Superior. This area was part of the Connecticut Western Reserve, which sold out to the Connecticut Land Company. The land held by these companies were to be distributed in lieu of pension for those who fought in the Revolutionary War.

Closed For The Season Before Demolition

Closed For The Season

Chippewa Lake Park: Closed For The Season - More Views of the Vanishing Park

Below are a few videos on from the film crew and actors who experienced the abandoned Chippewa Lake Amusement Park.

What Is Closed For The Season

Cinematography From Closed For The Season

In 2008, thirty years after the park's closure, the land the amusement park stood on was offered up for sale with an asking price of $3,500,000, and, according to the realtor's website, was sold to Chippewa Partners LLC. This company announced plans for a development on the site called "Chippewa Landing" which would include a hotel and spa, fitness center, restaurants, a conference and music center, small shops and other entertainment venues, expected to be completed sometime in 2010. To this date, very little has been done.

In 2009, most of Chippewa Lake Park's structures, trees, and debris were demolished and removed. As of January, 2011: The ticket booth, Ferris wheel and Tumble Bug rides were still on the grounds, as well as the remains of the ballroom and several other structures.

The only other items or memorabilia that exist may be found at auctions, garage sales, antique shops, or eBay.

Chippewa Lake - Good For One Admission

The Chippewa Lake Amusement Park was a wonderful place for parties, picnics, and a good place to go for just fun. The Starlight Ballroom was a marvelous place. I remember they had a restaurant that was quite a classy place. It was a shame the park was abandoned the the way it was.

Thank you for taking time out of your busy day to visit. If you were you ever a visitor, or your parents or grand parents ever ttook you to an amusement park, your shared memories are welcome here.

American Indians in World War 1: At War and At Home
Buy Now