5 Fun Non-Gambling Things to Do in Las Vegas

Rosheda Stephenson is a lifestyle writer who writes extensively on beauty and travel to the Caribbean and North America.

Las Vegas has moved far away from its beginning as verdant oasis in the middle of the desert. Las Vegas which literally translates to 'the meadows' was named by Spanish explorers in 1829 to reflect the fertile green meadows and happy streams that flowed from underground springs to create a fertile green oasis in Nevada’s Mojave Desert.

Today, the name Las Vegas elicits more risqué images than its translation suggests. The springs that gurgled through Las Vegas have long been depleted by the population boom that came following a brand of entertainment that has earned the city the moniker ‘city of sin’. Instead of wholesome, verdant images Las Vegas is now synonymous with gambling, strip clubs, prostitution and Elvis style weddings done on a drunken whim. Out of all these activities, gambling is the one that many people associate the city with. After all, the city’s other moniker is ‘gambling capital of the world’. There are however, other, shall we say, more wholesome things to do in Las Vegas that have nothing to do with gambling. Here are 5 of the best non-gambling things to do in Las Vegas for visitors who would prefer to keep their money away from the gambling machines and in their pockets.

If you’ve ever had dreams of making like a cowboy and reliving the wild frontier days depicted in western movies and novels, Las Vegas is just the place to make them come true. Leave the lights and money grabbing slot machines of the city behind and join a truly unique cowboy trip through the stunning Red Rock Canyon.

Red Rock Canyon lies just 20 miles away from the Las Vegas Strip and is stunning because of its drastic natural formations.The bright red cliffs formed from red sandstone, stands beside yellow and brown rocky mountains thousands of feet high and provide shade to cactus, yucca and other bristled desert plants.

Climb up the rocky trails on horseback with real horse wranglers who provide guidance to novice and experienced riders. Before you get to the very top where the payoff will be breathtaking views of the city and the mountains, stop and camp out for lunch in the wild just like real cowboys did in the days when week long rides were the norm. The only thing missing will be invading Indians or outlaw cowboys! Check out cowboytrailrides.com for good packages.

If long hours on a horse isn’t your thing, the Red Rock Canyon is a popular hiking spot so well marked trails, maps and other activities are available. Particularly interesting is the historic Petroglyph Wall hike with its 800 hundred years old carvings on the rock. Plan a trip at redrockcanyon.org.

Tied as the mob is to the birth of Las Vegas’ gambling industry, it may seem disingenuous to include this museum on a list of non-gambling things to do in Las Vegas. However, the mob is so inextricably tied to Las Vegas’ history that even if just for historical reasons this museum deserves a visit.

It could easily be argued that the mob helped create Las Vegas by using illegal gains to front the legitimate businesses and resorts that would lay the foundation for the Las Vegas of today. The Mob Museum makes this argument and makes it well in its interactive displays that will entertain and teach those who are interested in this part of American history.

For the history buff, the movie buff and the curious, the museum is a treasure trove on all things mob. Fans of infamous mob figures will enjoy the displays of information on men whose names were once whispered with fear. Al Capone, Lucky Luciano and Frank Costello are just a few of those featured. In addition to major mafia players, some major events in mob history are explained and exhibited in a way that will excite fans of the mafia period of American history. Notable is Chicago’s 1929 Valentine’s Day Massacre. On that bloody day seven men were lined up in front of a wall in Chicago and assassinated a result of war between rival mob families in Chicago. The wall where the assassinations took place and even some of the bullets from the day are all on display.

Other displays include original paraphernalia from famous mob movies and shows like The Godfather and The Sopranos. The mob Museum is located right in the middle of all the action in downtown Las Vegas, get information on tickets and opening hours at themobmuseum.org

3.  Cool Down at Boulder Beach

"A beach in the desert?"

Boulder Beach is really part of Las Vegas’ largest man-made lake called Lake Mead. A small section of the lake has been outfitted with sand to give the beach experience. Regardless of the technicalities, Boulder Beach is an excellent way to cool off on one of Las Vegas’ hot days. The actual sandy part of the beach is narrow, but the water is cool and inviting for swimming or just splashing around with the kids. The whole area is a peaceful respite from the busy strip and good for spending a few hours just sitting by the water getting a tan and watching seagulls and boats go by. Make it a whole day affair, and pack a lunch which you can later eat at the picnic area.

Boulder Beach is located in the Lake Mead Recreational Area, about 30 minutes from the Las Vegas strip. Plan a trip at nps.gov

How to Get to Non Gambling Activities in Las Vegas 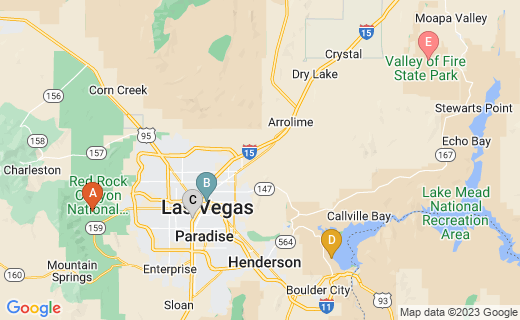 The Valley of Fire State Park is a bit further away from the heart of Las Vegas than the other places on this list, but is one of those places that every visitor must visit at least once. Like Red Rock Canyon, the 40,000 acres of land that make up the park consists of fiery red mountains made of red sandstone. The name Fire State Park is said to have been influenced by a passerby who noted that the area seemed like it was on fire because of the red rock. Apart from the stunning views of fiery red mountains, the park is filled with birds, rare wildlife like the desert tortoise, artifacts and historic carvings from ancient civilizations.

By far, the best way to see these sights is by hiking one of the ancient trails (the park dates from the Jurassic period) which are marked and documented by maps found throughout the park and at the visitor center.

5. Operate a Real Bulldozer at Dig This

Dig This Las Vegas is probably one of the coolest non gambling activities in Las Vegas. The concept behind Dig It is unadulterated childhood fun and will appeal to all the grown-up kids who dreamed of wearing a hard hat and operating an excavator or bulldozer as children.

Wreck, dig, stack and do whatever else you desire on a real excavator or bulldozer. The journey begins with your choice of vehicle, then it’s on to get fitted into a real hard hat and neon yellow jacket. After that, instructors give lessons on how to operate the levers and buttons that make your vehicle sing. Once you feel safe operating the gigantic machines, its time for the fun to begin under the watchful guidance of your trainers.

Some of the things the machines can do, with your help is stack tires, dig huge trenches, build mounds and more. For more information, visit digthisvegas.com

This list of fun non-gambling things to do in Las Vegas is proof that what happens in Vegas doesn't have to stay in Vegas. If you plan on visiting the city, try a few of them. Your pockets may just thank you. Happy travels!