The Museum of Fine Arts Budapest is Hungary's largest and finest art museum. The museum closed for visitors in 2015, and after the most comprehensive reconstruction project in its history, the museum re-opened at the end of 2018.

1. One of the Finest Museums of Budapest

The foundation of the Szépművészeti Múzeum (Museum of Fine Arts) was stipulated by the Millennium Act of 1896; the area opposite the Műcsarnok (Art Gallery or Hall of Art or Kunsthalle) was selected as the site for the new institution in 1898. World War I and the following austerities broke the museum’s spectacular development, although important works entered the collections even in the interwar period. However, World War II shook the Museum of Fine Arts to its very core. The upper staircase was hit by a bomb, and the glass roof was completely destroyed. In the last months of the war, the majority of the artworks, including the most valuable masterpieces, were hurriedly and carelessly thrown on rail cars and transported to the west. The collection returned to Hungary from Germany between 1946 and 1947, damaged to a great extent. 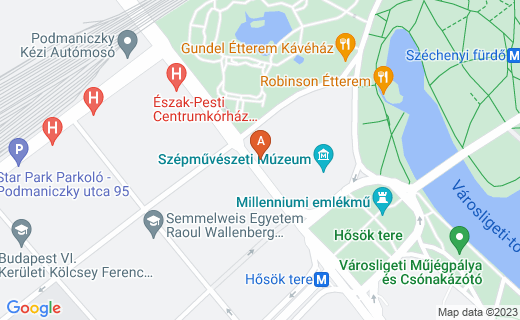 The Museum of Fine Arts is a museum in Heroes' Square, Budapest, Hungary, facing the Palace of Art.

Between 2015 and 2018 not only was the Museum renovated but its permanent exhibitions were also reorganized. Every room was renewed, the outdated heating system was modernized, the showrooms became air-conditioned and the roof was also renovated. The total expenditure of the renovation and the relocation of the artworks amounted in a sum of HUF 15 billion.

Albert Schickedanz and Fülöp Herzog, the designers of the already standing Art Gallery and the Millennium Monument on Heroes’ Square, were commissioned to make the architectural plans. It was built in neo-Renaissance and neo-Classicist styles. The building was inaugurated on 1 December 1906 in the presence of Emperor Franz Joseph and opened to the general public on 5 December. Domestic and foreign research as well as scientific classification elevated the museum into a public treasure of art history and an important institution of Europe with the richest collection between Vienna and St Petersburg. The number of its artefacts easily exceeds a hundred thousand.

2. The Marvelous Romanesque Hall Is Open to Visit Again!

The Romanesque Hall, a 900 square meter large room reminiscent of Romanesque cathedrals, fell victim to the previously mentioned events as well. It was damaged during World War II and used as a storage afterwards, the beautiful room completely filled with huge metal shelving. But it is over now! After seventy years, the public can visit the renovated Romanesque Hall again, which is the most decorated space in the Museum of Fine Arts by no coincidence.

The big ground-floor halls of the Museum of Fine Arts, built between 1900 and 1906, wished to represent the history of sculpture and different architectural styles originally with plaster casts. Therefore the Romanesque Hall received a Romanesque interior with medieval plaster casts on showcase.

Take a Look Inside

The restoration posed a great challenge to the restorers: due to the multiple leaks and the lack of conservation works, the wall-painting aged to an extent similar to a medieval church. Thus, the experts used methods usual for the renovation of Romanesque churches, to fix the paintings and plasters. Approximately 2500 square meters of wall were repaired, using 1500 liters of conserving agents, 100 kilograms of pigment in various colors and five and a half kilograms of gold.

3. One of the Largest Egyptian Collections Is on View Here

The Museum of Fine Arts possesses one of the richest Egyptian collections in Central Europe, so it is not a coincidence that this is the most visited exhibition of the Museum. The exhibition expanded with several interactive elements: we can learn about the face of the mummies with a 3D face reconstruction system or find out what our name looks like written in hieroglyphs.

The renewed Egyptian permanent exhibition of the Museum of Fine Arts awaits visitors with numerous new artefacts and themes, now with a larger exhibition space. In the new concept the ancient Egyptian world is presented in three thematic units: Temples – Gods; The Nile Valley – People; Tombs – The Dead.

Egyptian objects began to reach Hungary in greater numbers from the early nineteenth century onwards. Their owners were mainly aristocrats and diplomats as well as travelers who visited the Nile Valley during their pilgrimage to the Holy Land. The early collectors acquired Egyptian artefacts from the European art market, received them as gifts when abroad, or purchased them as souvenirs during their trips to Egypt. The most popular artefacts were human and animal mummies but statuettes, mainly made of bronze, and amulets frequently appeared too.

The Hungarian public was first able to view the Egyptian artefacts in the Ethnographic Repository of the National Museum in 1912, when the collection was exhibited in the Industrial Hall in Budapest’s City Park. In the early twentieth century, Egyptologist Ede Mahler suggested that the Egyptian artefacts of Hungarian public collections be united in one large collection. Hungary’s first permanent Egyptian collection debuted in the Museum of Fine Arts five years later, in 1939.

Do You Know What Was in the Place of the Museum of Fine Arts?

The location of the Museum of Fine Arts housed the Rotunda pavilion in City Park or Városliget erected for the celebration of the Millennia in 1896, which was meant to showcase the Feszty-körkép (Feszty Panorama). The painter Árpád Feszty was the son-in-law of one of the most famous Hungarian writers, Mór Jókai. The monumental cyclorama was Jókai’s idea, as the two men were great friends for a long time. It is interesting that Feszty originally wanted to paint the story of the Flood, but Jókai convinced him to paint the arrival of the Hungarians instead. The costs of the painting were covered by the Council of Budapest: The exhibition opened on 13 May 1894, it excited great interest and was considered to be one of the main attractions of the millennial exhibition at Budapest.

4. Get to Know the Art of the Whole Carpathian Basin!

Walking through the exhibition, visitors can study the changes in genres and styles that took place over more than 200 years in Hungarian painting and sculpture and see them in the context of history, cultural history, and the geography of art. The display of the rich collection of various types of objects predominantly follows a chronological order and within that it is divided into thematic sections. The Old Hungarian Collection seeks to familiarize visitors with the diverse art and multi-faceted artistic relations of the Carpathian Basin.

The ecclesiastical art and funerary cult of seventeenth-century Hungary are presented through monastic pictures, epitaphs, and funerary portraits. The milieu of baroque aristocratic castles is evoked by portraits, still lives, painted tapestries, and a rare cupboard with Nativity scene.

The paintings of Jakab Bogdány and Ádám Mányoki, both artists having earned a name abroad, are the most remarkable representatives of the genre of still life and portraiture. The most spectacular part of the museum’s baroque collection is assigned a special hall: here visitors can admire Hungary’s eighteenth-century ecclesiastical painting and sculpture, comprising painted and gilded wooden sculptures as well as richly coloured altarpieces, many of them of a monumental scale.

Ádám Mányoki is known primarily as a portrait painter. This still life is a unique piece in his oeuvre. The painter’s signature, complete with date and time of creation, was uncovered on the back of the work during the conservation process. It is possible that the reason the artist created this painting in Vienna in such a highly popular genre, because it was easy to sell and he needed to make ends meet. The “lopsidedness” of the composition suggests that this painting is one of a pair.

New National Gallery is being built in the City Park

Works of art from the period after the beginning of the nineteenth century can be viewed in the Hungarian National Gallery in Buda Castle. However, their new place will be in the New National Gallery, which is being built in the City Park.

5. Learn the Secrets of the Studios of European Sculptors!

Did you know that pieces of the European sculpture were lined up in the storage of the Museum, unavailable to the public? Whether you are familiar with the works of Messerschmidt, Sansovino, Moreau and Caspar Gras or not, you should not miss this exhibition. You can see a total of 100 sculptures from Gothic works to Classicist pieces.

In addition to showcasing the most famous sculptures found in the Museum of Fine Arts’ collection, the exhibition also provides an insight into the secrets of sculpting. The Middle Ages saw the emergence of a wide range of techniques used to decorate wooden sculptures. A widely employed, versatile material in Italian sculpture from the fifteenth century onwards was clay. The studies of sculptures were typically made of clay and in many cases so were the small-scale models delivered to the commissioners. Casting bronze sculptures and plaques flourished in Renaissance Florence, Venice, and Padua alike.

6. See the Mysterious Budapest Horse and Rider from up Close!

As opposed to many short-lived attributions of sculptural works to Leonardo da Vinci, the magnificent small bronze representing the vigorous group of a horse and rider has been attracting art historians for a century. But not even this amount of time could they decide if was the small bronze depicting a rider on a rearing horse is Leonardo’s own work or only inspired by him.

Although the attribution of any sculpture to Leonardo is difficult to sustain without any secure points of comparison, the question of the Budapest Horse and Rider’s authorship has aroused a lively discussion: was the small bronze only inspired by Leonardo’s ideas or could it bear the master’s own hand? What is certain: Leonardo always wondered how one could create a free-standing, rearing rider sculpture.

An unmatched masterpiece has been added to the collection of the Museum of Fine Arts in December 2018 through the highest-value purchase of the last 100 years in the history of the institution. The full-length wedding portrait of Princess Mary Henrietta Stuart, the eldest daughter of King Charles I of England, painted by the Flemish master, Anthony van Dyck was acquired by the Museum owing to the support of the Hungarian government.

Van Dyck was a prominent painter of his era, an equal of Rubens although originally his student. The 158 × 108 centimeters large painting was purchased in December 2018 at the London auction of the Christie’s auction house. Obtaining the artwork was a historical moment: such masterpieces are rarely come onto the market since works of similarly quality by the old masters are usually kept in Museums already.

The portrait is presented to the public in a cabinet exhibition organized for this special occasion, displayed together with a selection of portraits of royal children and Van Dyck’s early works from the museum’s collection.

The website of the Szépművészeti Múzem (Museum of Fine Arts) was used as a source to this article.