A Guide to the Whiskey Distilleries of Ireland

While in earlier times there were hundreds of independent whiskey distilleries in Ireland, there are only three distilleries on the island still producing whiskey today. Each distillery has its own uniquehistory and heritage, as well as producing its own distinctive whiskeys. Bushmills distillery is the oldest legal whiskey distillery in the world which is still active today. Cooley is the only independent Irish-owned distillery on the island. The third, Middleton distillery in County Cork, is the home of the famous Jamesons and Tullamore Dew brands as well as a variety of other highly-rated whiskeys. 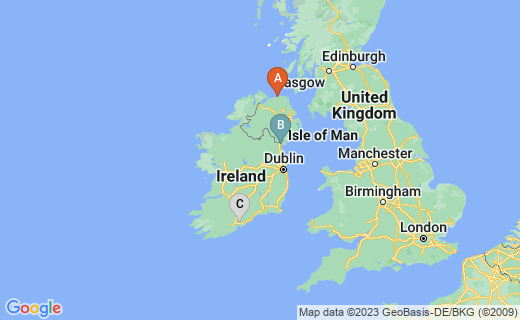 The distillery where Bushmills, Black Bush and Coleraine whiskeys are produced is located in the village of Bushmills in County Antrim, Northern Ireland. This distillery has a long and eventful history, stretching back to 1608 when Sir Thomas Phillipps was granted a royal licence to produce whiskey. The distillery has survived fire, smuggling, and the loss of the American market to prohibition in the 1920s, and continues to thrive.

Today Bushmills continues to be a fully operational distillery, producing 4.5 million litres of whiskey a year. Bushmills usually have 170,000 casks of Whiskey maturing at any one time and they operate a strict casking policy, sourcing only the best sherry casks fromSpain. The distillery is currently owned by the international drinks company Diageo.

Among its best-known and best-loved brands are Bushmills (blend), Black Bush and Bushmills single malt. It also continues to produce the historic Coleraine whiskey. In the 2010 San francisco World Spirit Awards, Bushmills was awarded the title of 'Best Irish Whiskey in the World'.

Guided tours are available and give an insight into the fascinating process of producing Bushmills whiskey. Plus you get to try the whiskies for free at the end of the tour! For more information contact: Tel: +44 (0) 28 207 33218 or email visitors.bushmills@diageo.com

GETTING THERE: The nearest airport to Bushmills is Belfast International. Many airlines operate cheap flights between London and Belfast, or alternatively you can fly direct into Dublin from a variety of locations worldwide and then travel overland. The nearest train station is 5 miles away in Portrush. There are bus services passing through Bushmills with Ulsterbus but they are irregular. For public transport timetables and fares in Northern Ireland check out www.translink.co.uk.

However, Bushmills is best visited by car - take the B17 road from the nearby town of Coleraine or the A2 from Portrush for a stunning coastal drive. The village sits on the beautiful North Coast of Ireland and there are a variety of world renown attractions nearby, including the Giants Causeway and the Carrick-a-rede rope bridge. So why not hire a car and visit them all?

Cooley distillery was established in the late twentieth century, and takes its name from the nearby Cooley Moutains in County Louth, about 80 miles north of Dublin. When Cooley was set up in the late 1980s it flew in the face of the plans of the Irish Distillers Group who then controlled all of the whiskey production in Ireland, including the Midleton distillery and Bushmills. Instead Cooley sought and received backing from international companies, including Moet-Hennessy.

Cooley continues to occupy a niche market as the only independent, irish-owned distiller on the island.The major brands produced by Cooley are Tyrconnel (single malt), Connemara (peat-smoked single malt) and Kilbeggan (blend). Cooley has also cornered the market in producing supermarket own-brand whiskies, a business tradtionally ignored by the Irish Distillers Group.

Cooley has worked hard to bring innovation back into Irish whiskey-making as well as reviving traditional distillation methods, and has gone on to receive a variety of awards. These include over 300 medals, and the title 'World Distiller of the Year' 2008 (IWSC).

GETTING THERE: The Cooley distillery is located in north-east Dundalk, which can be reached by road and rail from Dublin to the south or Belfast to the north. . The website for public transport in the Republic of Ireland is www.cie.ie, or if traveling from the north see the Translink website mentioned above. If traveling by car take the N1 northbound from Dublin or the A1 southbound from Belfast.

Midleton is located in County Cork and is the main distillery of the Irish Distiller's Group, with a production capacity of 19 million litres per year. It is home to many well-known and highly-rated whiskies such as Jameson, Tullamore Dew and Powers. The distillery also produces Cork Dry Gin and Huzzar Vodka. Midleton's is also home to the world's largest pot still (see photo above).

In the 1820s the first distillery was set-up at the site, by the brothers James, Daniel and Jeremiah Murphy who founded the James Murphy and Co. whiskey company. They later merged with other Cork-based distillers to form the Cork Distillers Company. Midleton was created in 1966 when the Cork Distillers Company joined forces with Dublin-based John Jameson and John Powers companies – together they formed the Irish Distiller's Group and opened a new purpose-built facility at Midleton in 1975.

Midleton has the distinction of producing the two most popular brands of Irish whiskey in the world; Jameson and Tullamore Dew .Old Midleton Distillery is open seven days a week year round for visits and tours, and includes a display on the history of Irish whiskey. It also has a gift shop and restaurant on site. For visiting information contact:

GETTING THERE: The town of Midleton can be reached by car traveling from Cork city (the nearest airport). Follow the N8 east out of Cork and then stay on the N25 until you reach Midleton, about 14 miles from the city.

Apart from the three operational distilleries above there are a couple of former distilleries which have been converted into musuems for whiskey fans.

Although Jamesons was subsumed into the Irish Distillers Group in 1966 and is now produced in County Cork, the original Old Jamesons Distillery in Dublin is open to the public as a heritage site. A tour of the centre includes a walk through a recreated distillery, browsing an exhibition on the history of Irish whiskey and the chance, of course, to sample a drop of the best-selling Irish whiskey in the world. For more information visit: tours.jamesonwhiskey.com.

The former Tullamore Dew distillery has also re-opened as a tourist attraction. The Tullamore Dew Heritage Centre is in Tullamore, County Offaly with organised tours available twice daily at 11.30 and 2.30. A tour of the centre includes audio-visual material, interactive experiences such as grinding your own barley and displays of various whiskey-related artifacts. For more information visit www.tullamore-dew.org.