Dunsapie Loch, deep in the heart of the city

The City with Country in Its Heart

Edinburgh, the capital of Scotland, is probably best known for its International and Fringe Festivals in August and for its celebrations on New Year’s Eve (or Hogmanay as we call it in Scotland.)

Apart from these festivals there is also the Science Festival in April, the Imaginate Festival in May, the Film Festival that moves about a bit, but seems to have settled down in June, the Jazz and Blues Festival in July. In August festival fever is high, when to accompany those already mentioned above there are the Book Festival, the Art Festival and the Edinburgh Military Tattoo. The Mela Festival starts towards the end of August and stretches into early September. Whew!

And there’s no rest in October, because that’s when the International Storytelling Festival takes place. Most of November is quiet, but that’s because Edinburgh is gearing up for a month-long festival that starts in the last weekend and culminates in Hogmanay. All of December is one big party with German and Highland Markets just off Edinburgh’s main shopping street, Princes Street, and an ice-rink and fun fair in Princes Street Gardens. And let’s not forget the Santa Run, which takes place on the first Sunday in December, and during which hundreds of Santas race through Princes Street Gardens.

So you could say that in Edinburgh people party, and then party some more. There’s even a website dedicated to Edinburgh’s festivals, and it probably won’t surprise you to know it’s called EdinburghFestivals.co.uk. Nor will it shock you that the web-site declares Edinburgh is the world’s Festival City.

This might be true, but there is another side to Edinburgh.

A different kind of green

It is one of the greenest cities I know. I don’t mean the most environmentally friendly city – although the council do have a slogan: “Let’s make it Edenburgh,” and have just given us a bin for all our food waste, which they will collect and compost. (It sits proudly beside our bin for garden waste, our bin for cardboard, our bin for glass and cans and our plastic bag for plastic containers.)

When I say Edinburgh is green I mean it has an amazing number of green oases, areas within the city where you can escape the city. All of the photos illustrating this article were taken within the city boundaries, and there is not a building in sight. What’s more, although Edinburgh has plenty of man-made green areas, such as the Royal Botanical Gardens and The Meadows, it also has many natural wildernesses, and in it through these that I will now guide you.

First let me introduce you to our dear friend the Highland cow.

Yes, this Highland cow really does live in the city, less than two miles from the center. This photo was taken in the grounds of one of Edinburgh’s smartest hotels, the Prestonfield House Hotel. This 17th century building was originally built as a home for Edinburgh’s Lord Provost, and designed by the same architect responsible for Holyroodhouse Palace. (Holyroodhouse Palace is the royal residence in Edinburgh.) As you might imagine with this history, Prestonfield House Hotel is a luxurious place to stay. As well as the Highland cows, beautiful peacocks also roam in its grounds. As you might expect from a luxury hotel, the price tag isn’t cheap, but it is nowhere near as expensive as you might imagine so would be a great place to stay for your country weekend in Edinburgh. But if your budget for a hotel room is truly “budget" rather than luxury hotel, then you could stay in one of the many nearby Bed and Breakfast Guest Houses and pop along to the Prestonfield House hotel to say hello to the Highland cows and sample the traditional High Tea in its popular Rhubarb restaurant.

A short walk from Prestonfield House is Holyrood Park. This was originally a royal hunting estate. It contains three lochs (lakes), a ruined chapel, 151 foot (46 meter) high cliffs – and a volcano. The volcano is extinct however, and has been for many years. Visitors and locals alike love to climb this 251 meter hill, known as Arthur’s Seat. There are many different routes to the top of Arthur’s Seat, and if you are not as fit as you’d like to be, on one of the routes it’s possible to drive a good way up the hill, and from there head on up. While I would recommend sensible shoes such as trainers or hiking boots for the trip to the top, I have seen people in flip flops and in high heels!

The first photograph in this article and the one below are of Dunsapie Loch, which is about halfway up towards the summit of Arthur’s Seat. The view in the top photograph looks south and the one below looks north toward the sea. But don’t be fooled – that thin rim of land between the loch and the sea conceals a steep hill, below which are housing estates and industrial land before you reach the water. Nevertheless, up here at Dunsapie Loch, surrounded by seabirds and gorgeous swans and cygnets, it is truly easy to forget you are in the middle of a city. Swans are a common sight in Holyrood park, with many more on St Margaret’s Loch and Duddingston Loch, the latter being a bird sanctuary.

Places to eat near Holyrood Park

If all the walking and fresh air makes you hungry, from Holyrood park it is a short walk to The Engine Shed, a café that serves tasty organic food and is run by a community enterprise, training people with learning difficulties in catering. To date more than 250 people have successfully completed the training program, and 80% have gone on to employment, with the remainder pursuing further education. And just as importantly the food is great. If you arrive at lunch time, be prepared to queue for the counter service.

Slightly further away, Earthy is an organic shop and café that opened in May 2008, and that has beaten the recession to expand into a second shop in Portobello, Edinburgh’s seaside “village”. Earthy staff are friendly and helpful and the store was recently voted Best Scottish Independent Retailer.

Or you could always head to Holyroodhouse Palace itself , where the courtyard café serves snacks and light meals.

The Waters of Leith

A city of villages and a babbling brook

Edinburgh used to be considerably smaller than it is today, and in the twentieth century the city absorbed many surrounding villages. But in many ways Edinburgh is still a series of villages, with distinct shopping areas, churches and even village pubs. One such area is Duddingston Village, to the south east of Holyrood Park. Duddingston Kirk (church) acts as a venue during the Fringe Festival in August, and is pretty spot to visit all year round.

Just north west of the city center, another village that still retains its name is the Dean Village. The best way to visit this area is to head for the Gallery of Modern Art, have lunch or incredibly yummy cakes in the café (I recommend the brownies) and then head to the Waters of Leith. As you head down the twisting steps from the art gallery, you step out of city and into countryside.

When we first moved to Edinburgh we lived near the Waters of Leith and I often used to bundle my then-small children into a push-chair and stroll along the footpath by this narrow river. The Waters of Leith run right through Edinburgh, from Balerno in the south west to the docklands at Leith. My favorite strolling ground is the stretch between the Gallery of Modern Art and the Stockbridge area. Apart from when passing through Dean Village, along most of this route you could be deep in the countryside, as the photos above right and below show. Ducks are a common sight on this part of the Waters of Leith, along with ducklings in the springtime. You may be lucky enough to see the heron we spotted on our most recent walk along the Waters.

More views of the Waters of Leith

Stockbridge and the Botanic Gardens

When you get to Stockbridge, you can browse through the many charity shops, visit one of the area’s cafés, or keep walking along the river past the old ‘colony’ houses (once railway workers accommodation, now very trendy places to live), and on to the Royal Botanic Gardens where the greenery is somewhat tamer than the riverbank’s, but equally magnificent. Here you could get to feed a squirrel – not Scotland’s beautiful and elusive red squirrels, but the more abundant grey. And if I’ve completely worn you out now, you’ve probably guessed that I know a good café!

Edinburgh Countryside - map showing the places mentioned in this article 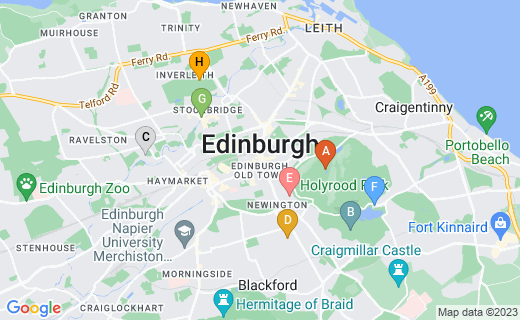 Arthur’s seat is in Holyrood Park. 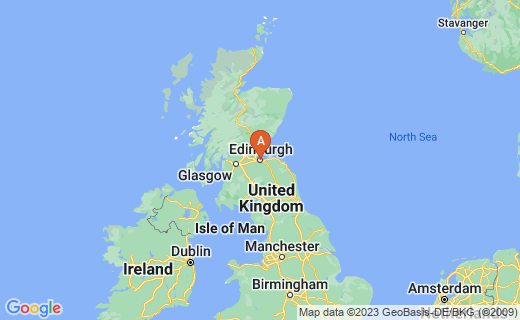 How to get to Edinburgh

Continental Airlines fly from New York to Edinburgh, and Air Transat and Canadian Affair both fly from Toronto.

By rail the journey from London is around 4 hours 30 minutes.

For more information on traveling to Scotland (and some fun) see my article: Scotland Travel Requirements

For more information on Earthy and 2 other inspiring businesses from Edinburgh: Successful Small Businesses: 3 Inspiring Examples