A Little Guide to Monselice

Monselice (pronounced mon-sael-ee-chay) is an Italian city and municipal area in the province of Padua (Padova), part of the Veneto region of Italy. It is about 20km south of the city of Padua. Although it has the designation of a city the central part is a small old town with some impressive medieval architectural features and buildings including some wall fortifications, a medieval civic tower, a castle and several buildings built with features which are typical to the area.

Monselice lies between the Euganean hills of Montericco (312 metres) and the 'Rocca', the latter observable towering over the old town (110 metres). It also has seven chapels or shrines rising on a hill which are also known as a special place of pilgrimage and the chapels and churches have appealing features and artwork. Monselice has a number of nice cafes and restaurants. At busier times it features a market day in and around its medieval public square.

The name 'Monselice' is thought to be from 'Mons Silicis' relating to stone extraction from a hill nearby. It shows settlement since the Bronze Age and the city later developed in the 5th and 6th centuries as a Byzantine hill fortress. An increase in population in the eleventh century led to further developments, then under Ezzolino III in the XIII century there were fortification improvements leading to further enclosure of the town. Ezzolino III built a civic tower and further a palace, now a part of the Castle of Monselice. The Lords of Padua or Carraresi ruled for a while in the fourteenth century and in the fifteenth century it became part of the Venetian Republic. A period of French then Austrian rule preceded the area becoming part of the new Italian Republic in the later half of the nineteenth century.

Things to See and Do in Monselice

The old town is welcoming and peaceful in the morning with a good selection of cafes and restaurants to suit all tastes throughout the day. As a highlight when visiting, we enjoyed the simplicity of walking out in the morning for a cafe latte and a pastry, perhaps buying a newspaper from the kiosk in the Piazza Mazzini and something from the bakery for later. Like anywhere else it can become busier and there are parts of the area and times of the day which are livelier, particularly when markets are held. There are niche shops and grocery is available for the self catering tourist, with stores for larger purchases just outside of the town.

The town has several unique places worth visiting. 'Castello Cini', the Castle of Monselice is a regional museum and made up, in fact, of four main areas, the Roman house from the 11th century and a twelfth century 'Castelletto'. A tower was added in the 13th century and some unique fireplaces added later. The Marcello family, a family of nobles at the time of the Venetian Republic gentrified the complex, later adding connecting areas including a library, a courtyard and a chapel. The castle is available for the public to view and sometimes events are held there such as plays in the courtyard. An Italian Earl, Vittorio Cini undertook restoration in the last century using detailed research.

The "Torre Civica" was built in 1244 on the order of Frederick II by his vicar Ezzolino da Romano with the clocktower being added in the sixteenth century. It is located by the town square of Piazza Mazzini. The working clock is maintained following a method observed since its construction.

Going past the entrance of lions and ascending the slopes of the Rocca Hill you go past the Nani Villa statues pulling faces at you at the top of a wall. Further up the Jubilee Shrine of the Seven Churches (Santuario Giubilare delle Sette Chiese) is found, consisting of six chapels side by side along the road that ascends to the square in front of Villa Duodo, where the church of San Giorgio is located. This site has been designated a place of special pilgrimage. About halfway along this route is the church of St Justina which dates back to 1256 and has some interesting artwork inside.

On top of the Colle della Rocca is a fortress built by Emperor Frederick II dominating the town and there are some statues and a staircase on the side of the hill connected with this.

Going back down to the town, the Piazza Mazzini, bordered in part by the fortification walls, has cafes and restaurants nearby and there are more in other parts of the town. The tourist information, itself an attraction, located near the foot of the slope by the castle provides more information on this town and on the places to see in the Euganean Hills.

How to get to Monselice

Travellers can fly into the Veneto region where Monselice is situated via airports at Venice Marco Polo (Venezia), Verona and Treviso.

There are various options for travel from the airports. Cars can be hired in advance and picked up from the airport which is useful if you plan on touring around the area. Taxis are a possibility and can be convenient and there is the train which is less costly.

Travelling by train is possible as Monselice has its own rail station so the best option is to aim for Padua or Venice stations and take a train from there/continue to Monselice. From Venice Marco Polo airport there are hourly buses to Padua (Padova) and a bus service to Venice Mestre. From Treviso airport there are bus and shuttle connections with Padua and Venice Mestre station where a train can be taken to Monselice. There are shuttles from Verona airport to Verona Porta Nuova Station where passengers can get trains towards Padua or change at Venice Mestre station. 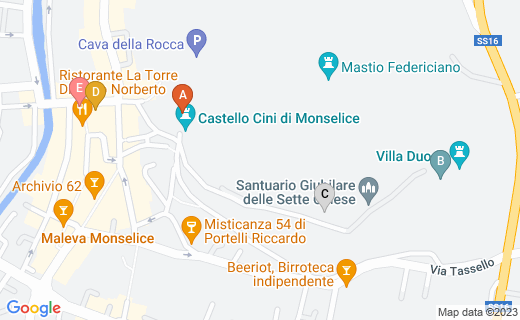 How do you like to travel as a tourist?

Places to See in the Region

Monselice is not far from Padua and Venice which are great places to visit. They are both a train ride away. There are trains from Monselice to Venice from which passengers can take water transport to visit the islands in the Lagoon. The closest station to the city and lagoon is Venice Santa Lucia so if the train only goes to Venice Mestre you can change and get another to Venice Santa Lucia. Over the water of the Venice Lagoon there are Lido beaches. Bologna is accessible by train to the south.

Monselice lies at the foot of the Euganean hills and towns, famous since Roman times for their spa waters. Particularly if touring by car, the Veneto region has some beautiful countryside and not far away are the pleasant beaches of the Adriatic which, like many beaches in Italy, have areas which often have a bar and/or cafe and provide, for a daily hire fee, sunloungers with access to facilities.