A Little Guide to Stromboli

Stromboli is a volcanic island situated in the Tyrrhenian Sea to the north of Sicily in Italy. It is part of the Aeolian islands (Italian: Isole Eolie) on a volcanic archipelago from which emerges the largest island of Lipari, together with Panarea, Alicudi, Salina, Basiluzzo, Vulcano, Filicudi and Stromboli itself. Stromboli has a smaller ‘cousin’ island Stromboliccio: a large rock said to be formed also from volcanic activity.

Approached by boat the island of Stromboli makes an impressive silhouette against the landscape. Formed in the classic cone shape, its size and the sight from its peaks of occasional gas emissions or the glow of lava at the top (evident particularly after dusk) leave a visitor in no doubt that this is an active volcano, and a large one. On arrival at its ports the individual character of Stromboli is evident due to its vibrant community based mainly around fishing and tourism. The islanders, who call the volcano ‘Iddu’ (meaning ‘he’), are accustomed to accommodating visitors in the cafes, restaurants and hotels. Large vehicles are restricted, leaving the possibility of utilising smaller scooters and electric carts in order to make a tour around the small roads.

The island of Stromboli is known for its active volcano of the same name, which is almost constantly in a state of eruption. The activity is monitored and local guides can give information on current emissions. Stromboli has an lively island community and fishing industry located by the skirts of the volcano. Over the years the community has lived with the volcanic display above the villages, observing its fluctuations, sometimes prompting evacuation or other evasive measures. Along the portside of Stromboli village are restaurants, cafes and provision for tourists together with colorful houses going up the slopes along winding alleys leading to town squares and churches. Ginostra, the other village on the island is accessible by boat and is popular for bathing by the sea and rocky promontories.

The island has also stoked the imagination of writers and film makers. The world famous science fiction author Jules Verne mentioned Stromboli in his ‘Journey to the Center of the Earth‘. JRR Tolkien, the creator of the Lord of the Rings series is thought to have identified Stromboli as Mount Mordor in his books on a middle earth civilisation. Stromboli was famous for an Ingrid Bergman movie of the same name, directed by Roberto Rossellini; tourists can still visit a museum located at the house depicted in the film with memorabilia dedicated to the actress and the movie within.

The Aeolian islands attract up to around 600,000 visitors each year and the islanders have an administration and ethic which aim strongly to protect the structure and ecology of the area. Stromboli has a unique geology and geoseizmicity which provide interest to daytrippers, tourists and those with specialised interests. Services for tourists are often seasonal focusing on the time from early summer to early autumn months

The islands formed as a part of an area where historical tectonic activity shaped the geology of the area. There is still evidence of thermal and gas vents in places around the waters and the islands of Vulcano and Stromboli are famously volcanic giving their names to two types of eruption, Vulcanian and Strombolian. The Aeolian islands are designated as a UNESCO world heritage site.

Stromboli Over the Years

The geological history of Stromboli goes back over 200,000 years. The population of the island has varied over the years, the earliest farming inhabitants living there only during sowing of seeds and the harvest. Known to the Arabs as Strongyle and to the ancient Greeks as Strongos, it was said in myth to be the home of the god Aeolus. The economy of the island was historically based on fishing and agriculture. The town around San Vincenzo came into being in the sixteenth century.

The population has been historically small and was low around the early twentieth century due to migration. These days there is an active fishing community which thrives alongside tourism making the island have a lively community atmosphere, particularly in summer.

Stromboli has featured many times in film and literature including forming an imaginative base for the fictional landscapes of writers. The father of fantasy fiction, JRR Tolkien who wrote the Lord of the Rings and the Hobbit was rumored to have been inspired by the sight of the erupting Stromboli saying that he had not seen anything that looked "so much like Emyn Anar". Jules Verne incorporated the landscape into his ‘Journey to the Center of the Earth’ and in the story the characters emerged from a vent on Stromboli at the end of their journey.

The Swedish actress Ingrid Bergman famously appeared in Roberto Rossellini‘s film ‘Stromboli’ and the building in which she stayed is preserved as a museum for visitors as both the fictional film romance of the characters and the real life love between the director and actress set the scene for all those fond of romantic locations. 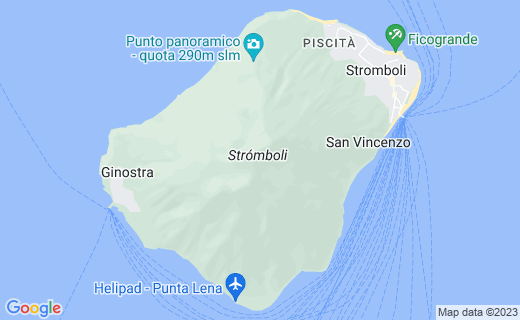 Which sort of island appeals to you?

Travelling to Stromboli and the Aeolian Islands

Many people access the Aeolian islands via ferry services located at the port of Milazzo at the North Eastern tip of Sicily. There are also seasonal ferries from points such as Cefalu near Palermo. Usually a service will go to one or more of the islands allowing the visitor ‘island hopping‘ to reach the desired destination. Some resorts offer organised guided tours to the islands which can explain the various regulations, customs and safety tips which are particular to the destinations.

Each island is different and interesting in its own way. Many tourists head for Lipari, which as the largest of the islands is a good first stop with a choice of shops and restaurants. Vulcano offers the opportunity to bathe outdoors in volcanic spas. Panarea is a somewhat exclusive resort with a quieter ambience. Filicudi and Salina are known for their great cuisine. Basiluzzo is said to be fascinating for some geological and archaelogical attributes. The island of Alicudi has mules and donkeys to transport and carry due to the many stairs and narrow alleyways.

Boat rides with a guide can showcase the geological features particular to the region and land based tour guides organise walking trips.

Tourists appreciate the spectacular views and the archipelago is interesting to explore due to its uniqueness.