Don is an Amateur Photographer. He has been capturing examples of Beauty, Life and Scenery for decades and shares his works with friends.

A Nature Walk in Lynchburg Virginia

My wife and I try to get as much exercise as possible and one thing that we really enjoy in our travels in our RV is finding a great Nature trail for our walks.

My Wife and I do try to walk at least 4-5 miles a day, at least five days a week.

These walks keep us healthier, of course, and just walking among the many trees, plants and the occasional flowers turns what could be a boring task into a true joy for us.

So, we search out trails that are not just long enough for us, but very scenic if possible.

Percival's Island and the Riverwalk

We have been visiting my hometown of Lynchburg Virginia for a while and staying in our motorhome. Presently, we live in Florida but we do come back “home” occasionally to see our family and friends.

For your information, Lynchburg is a great little city in Central Virginia, pretty typical of the South, situated on the banks of the James River. It is named after it’s founder, John Lynch.

Lynch found that the area where the city is now located happens to be at the highest point of the James River that a boat can go without having to resort to portage.

This made the land along the banks of the river important as a potential area as a port for goods to be shipped inland and down to the coast.

The Lynch family acquired the adjacent land and established a Ferry across the river as well as eventually starting the new settlement, on the riverbanks of the James, that was to eventually become Lynchburg, Virginia.

The James River at Lynchburg Virginia

The city’s history is well known and documented and I won’t go into that in this article but I will mention the present and the very nice Walking trail on Percival’s Island.

Percival’s Island is right below the center of town and sits as a long spit of land between the city and the adjacent county of Amherst.

This island was used for over a hundred years by the railroad companies who owned it as a place to maintain and store rail cars off of the mainland, for their own convenience.

Lynchburg, and what were, at the time, the major industries, such as; the Lynchburg Foundry, the Tobacco and Cotton Warehouses, the railroads and others, were prosperous for many decades along the banks of what is called the “lower basin”.

Most of them have long been closed down and their buildings closed, including the railroads’ need for Percival’s Island.

Skechers Performance Men's Go Walk 4 Incredible Walking Shoe
I love my pair of these walking shoes. I have been using them on my walks for a few months now and they give good support. And the price is great.
Buy Now

ASICS Women's GEL-Frequency 2 Walking Shoe
This shoe turned out to be my wife's favorite one when we take a walk together. She says it is really comfortable.
Buy Now

The city now owns this island and regardless of what happens in the future, it has turned the island into one grand asset for the local citizens.

They tore out the old railroad tracks on the bridges and the island and replaced them with a well though out walking path along with several nature trails branching off to the river banks themselves.

They call this walkway “the Riverwalk” and it is just that, a great trip along the James River.

In conjunction with the county of Amherst they have established a wide paved trail including a bridge from Lynchburg on one end and another over to the Madison Heights area of Amherst on the other side.

The walk is a well wooded one that is over six miles long that provides numerous views of the James River and access to its banks.

There are a number of cleared areas for the individual, or couple, or family to lay out a blanket and just enjoy the sun and the surrounding nature or just relax and catch a few of the sun’s rays.

As I mentioned, there are several points along the Riverwalk where you can take your children or friends down to the water for a swim in the river, or a waterside picnic or just to watch the many people floating by on a warm summer’s day in their Kayaks, Canoes and other such floatation devices.

I mention all of this because when you add everything up, you have a world-class asset for the city where people can; take a casual walk, have a good run, ride their bike, or just take the family out for some fresh air.

My wife and I have been going downtown for the past few days, parking our car in a free parking lot situated below Commerce street and taking advantage of this great “Riverwalk”.

This is one place where I feel public monies were well spent.

And, judging by the happy faces on the many others using the Riverwalk, they also appreciate what a jewel the city has provided for them.

With it being the end of May, we did notice, on our walks, a number of flowering plants.

Most of what we saw were wild plants indigenous to the area, so it was a treat to find some of them blooming and some were even bearing fruit.

Some views as you walk along the Riverwalk

Nature at its best

Blackberries, Huckleberries, Wild Strawberries, even Honeysuckle bushes were abundant along the path, you just had to stop and look. And you could even have a taste, if you wanted.

And, there were a few wild trees I remembered from my youth that we called Stinkweed. It's a tree that will grow where nothing else will and it smells nasty.

In fact, just touching a limb of this plant will transfer its odor onto your hands. I haven't seen one of these trees, up close for decades, but I did remember to keep my hands away from the little stinkers.

Overall, the variety of trees and bushes along the path was a good sampling of what I remember seeing in the wilds of Virginia for ages.

I had my camera with me, so I took a few shots of most of what I saw, as we walked along the pathways and banks of the river itself.

I have attached some photos of what we found blooming along the paths that day, along with some great views that might be of interest to you the reader, in case you want to take a great nature walk while in Lynchburg.

Kayaks and Canoes on the James River

Parking and Entrance to Riverwalk 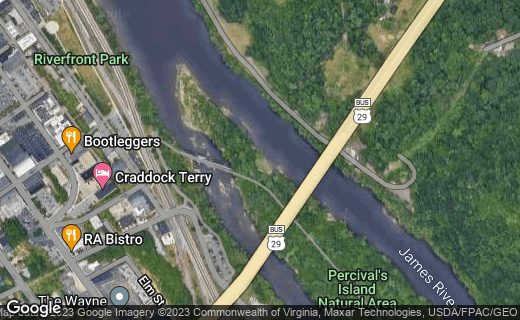 Kayak Race on the James River in Lynchburg Virginia