A Quick Guide To Athens Greece

The Acropolis is a must on every visitor’s itinerary. This and the neighboring Parthenon are the city landmarks and over 3000 years old. An acropolis is a citadel built on the highest elevation of a city.

There are several of these in Greece. But the Athens Acropolis is the most eye-catching and undoubtedly the most famous. The fatiguing ascent is more than rewarded by the breathtaking panoramic view of the Greek capital city.

Situated on the southern slopes of the Acropolis, the Herodeon is one of the world’s oldest open-air theaters. This ancient amphitheater was built in AD 161 by Herodes Atticus in memory of his wife, Regilla.

Today, it regularly hosts performances under the Athenian sky. Entry to the Odeon is from Dionysiou Areopagitou Street and the walkway that links the main archaeological sites.

To get inside the Acropolisand see its north and south slopes, including the Odeon and Theater of Dionysus, buy a EUR 30 pass valid for five days.

The Kolonaki neighborhood with its classical city palaces and the ornamental Vassilissis Sofias Avenue is a true feast for the eyes. At the center of this district is Kolonaki Square.

The Square is seamed in with classy boutiques, shopping centers, restaurants, cafes, and bars. Here you’ll find everything that’s chic and expensive. The Square and the streets around are a meeting place and upscale shopping mile.

Have A Wine At Heteroclito

In ancient times, the land of this country was covered with vineyards, and wines were exported throughout the Mediterranean. Wine belongs as much to Greek tales and legends as Dionysus, Ariadne, and Odysseus.

The ancient grape varieties had practically disappeared, but thanks to a new generation of winemakers and traders, viticulture and wine tasting are experiencing a new craze.

Hence the emergence of wine bars in Athens. Opened by Madeline Lorantos and Dimitris Koumanis, Heteroclito offers the widest selection of wines. One can savor 20 by the glass and 150 in the bottle, while enjoying a plate of charcuterie and cheeses that are of course Greek.

In this cellar, wine lovers will recognize the Gerovassiliou area and the excellent Malagousia. To taste, sit either on the terrace or inside at one of the tables in a bar that cultivates a 1950's Parisian spirit.

There’s no better tool for escapism than cinema. A screening under the starry sky on a warm summer night, surrounded by the sweet aroma of Mediterranean herbs and flowers...

What could be better than watching movies in a place that has been screening films for nearly a century, since 1935? Perhaps only the fact that the cinema is located in a blooming, oasis-like courtyard overlooking the capital’s main historical icon, the Acropolis.

Athenians have a strong link with the open-air cinema tradition. The 1960s were a golden age of summer cinemas, and by the 1970s there were more than 700 of them in the city. Nowadays the digital era has lured away moviegoers, and very many of those cinemas have closed for good. Of those still open, Cine Thision is the most intimate, attractive, and beloved.

Cherished by locals, it has also regularly featured on various lists of ‘the best’ .The cinema is located in the Thiseio district, one of the most laid-back areas of Athens. Depending on the weather conditions, Cine Thision is usually open until late October. Its garden is filled with beautiful red chairs, and the whole space, including the screen, is framed with greenery.

You can purchase famous film posters by the entrance, and the café offers local specialties and refreshments. In order to stay true to the old traditions, tickets can be purchased only in person and on the spot, with no online options available, so better arrive with time to spare. The program includes new releases as well as masterpieces of classic cinema.

If you want to explore more open-air movie events, follow the news about the Athens Open Air Film Festival. Established eight years ago, the festival takes place all summer long in open-air cinemas, parks, and squares all around the city.

Have A Great Meal At Athiri

Tucked away in the Keramikos district, the leafy courtyard of the Athiri restaurant is a fitting venue for a Mediterranean feast with a Greek twist.

Benaki Museum is housed in the former mansion of the Benakis family. The museum was founded in 1930 by Antonis Benakis, an art collector whose father was Emmanuel Benakis, a Greek merchant and politician.

It re-opened in 2000, after a 20-million-dollar renovation, and now focuses solely on Greek art and culture, although it previously also exhibited vast collections of Islamic and Asian art as well as Chinese porcelain.

These collections are now showcased in its satellite museums. The Benakis family collection originally contained around 37,000 Islamic and Byzantine artifacts, which have been significantly added to over time. 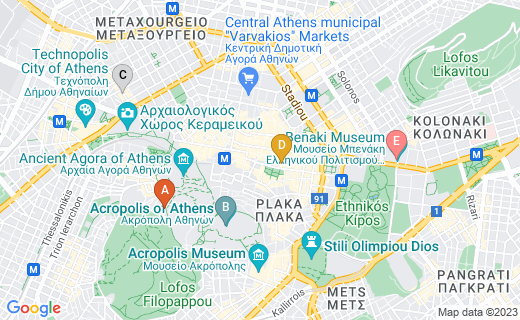