A Quick Guide To Barcelona, Spain

The Mercat del Ninot is proud to offer some of the finest seafood in Barcelona. The market features stalls selling fresh and dry cod, beans, lentils, and fresh mushrooms along with small family-run bars and eateries serving tasty snacks and set menus.

The Mercat de la Boqueria located directly on La Rambla is a real tourist magnet. It’s the prettiest, largest and best known market in Barcelona and has none the less lost almost none of its characteristic charm.

You’ll find both tourists and locals being targeted by the market callers to come check out their fresh products. It’s best to visit the market when you’re a little hungry so you can enjoy lunch right at one of the many stands.

There’s something here for everyone and at a fair price: sweets, honey, cheeses, oils, olives, native and exotic fruits and vegetables, fresh and smoked meats, fish and seafood. Everything’s fresh and the selection is enormous. Opening hours: Monday to Saturday, from 6:00 a.m. to 8:00 p.m.

Visit The Design Museum of Barcelona

opened in 2014, the new Design Museum of Barcelona is located in the middle of Glòries square, a formerly industrial part of the city that is currently undergoing a rush of change with the aim of becoming one of Barcelona’s future epicenters of cultural life.

As one would expect, the new museum’s configuration – the accomplishment of the local architectural firm MBM Arquitectes – is of the radical sort and consists of two parts: one underground, the other soaring 14.5 meters into the sky and looking a bit like a submarine’s periscope. The museum’s collection contains an impressive 70,000 items, and is actually a merger of four previously independent institutions: the museums of decorative arts, ceramics, textiles and graphic arts.

A Must See: Sagrada Familia

The Roman Catholic basilica may not be finished yet, but it is still the tourist draw number one and the hallmark of the city. Antoni Gaudí designed it in the New Catalan (Modernism) style.

Construction began in 1882. Since Gaudí's death in 1926, other architects have taken over to expand on his original idea and the work on the Sagrada Familia continues. The basilica is an absolute must-see for anyone visiting Barcelona.

Aside from an outstanding collection of Romanesque church paintings and Catalan art from the 19th and 20th centuries, the Museu Nacional d’Art de Catalunya also has one of the most stunning views of Barcelona thanks to its location on Montjuïc Hill.

On the museum’s rooftop you can explore a 360-degree view of the city’s skyline while enjoying a glass of cava, the Catalan sparkling wine. If you don’t have time to visit the whole museum, you can buy a ticket only for the rooftop

Take a Stroll in Sarrià-Sant Gervasi

Once considered the pinnacle of affluence in Barcelona, Sarrià Sant-Gervasi remains one of the city’s most upmarket areas. It consists of luxurious houses and apartments, narrow streets leading to quiet and leafy squares, and gorgeous Catalan architecture.

And while big tourist attractions are few and far between, the real attraction of this area lies in its village-like atmosphere.

Tucked away in this barrio is the Barcelona Science Museum, which is an incredibly good diversion for three or four hours. One of the highlights is the recreation of a flooded Amazonian forest.

Be Amazed At The Palau Baró de Quadras

A dream. The fairytale-like palace Baró de Cuadras designed by architect Puig i Cadafalch houses the Institut Ramon Llull. The building impresses visitors with its magnificent, Art Nouveau halls that feature interlocked Moorish multi-foil arches and columns with all kinds of ornamentation. S

tanding on the tranquil rooftop terrace, you have a fantastic view over the city and the Sagrada Familia. Pure enjoyment – and that’s for free!

See Modern Art At The MACBA

The immense geometrical white building (voluntarily conceived that way by the architect to better bring out space and light) is located amid the historical El Raval neighborhood, by the city harbor. It houses quite a few gems of modern and contemporary art.

The MACBA (Museu d'Art Contemporani de Barcelona) is exclusively devoted to artists from the second half of the 20th century, from the 1950's material abstraction to Pop Art in the 1970's.

You'll be able to gaze at works by Antoni Tàpies, Paul Klee and Francesc Torres, but also Jean-Michel Basquiat, Andy Warhol and Alexander Calder. In all, the museum has more than 5,500 pieces on display, making for a better understanding of the political and social realities of the times.

You won't find permanent collections, but rather a regular rotation of MACBA's vaults. Each one of your visits will potentially be truly unique! 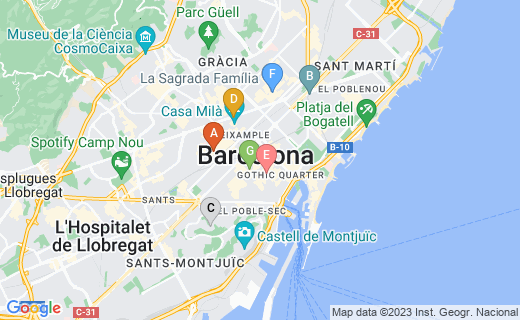