A Quick Guide To Bari, Italy

Stroll On The Nazario Sauro Promenade

The part of the promenade called Nazario Sauro is of particular interest architecturally. It is dominated by a mix of different buildings, including some in Art Nouveau style while others have a monumental, fascist character.

The section called Imperatore Augusto is immediately outside the historic city walls. During the morning it belongs to the fishermen unloading and then selling their catches in the fishing port, and in the evening it's a place where young people meet.

The approximately 50km journey to the west of Bari is definitely worthwhile: When do you get to see an octagonal fortress from the 13th century? In terms of its position, alignment and shape, this castle built by Frederick II displays an astronomical and mathematical precision that is still astounding today.

Watch Pasta Being Made In Bari Vecchia

Bari Vecchia, the oldest part of the city, is surrounded by medieval walls (Via Venezia). The old city is an interesting mix of alleys, atmospheric squares (Piazza del Ferrarese and Piazza mercantile), churches and monuments.

The traditional shops, the elderly women with their Orecchiette (pasta) and the washing hanging from the facades characterize the atmosphere. This is also where Bari's nightlife can be found in the small hours.

As one of the first Norman churches in the south, the basilica is a showcase example of Apulian Romanesque architecture. It was built between the 11th and 13th centuries.

Saint Nicholas is the patron saint of seafarers, merchants and young girls, and his remains rest in this basilica. Under the cathedral there are archaeological excavations that are really worth seeing.

Europe's largest theater rises up in the heart of the Murat quarter. It was opened in 1903 and represents a central piece of Bari's history. The building was destroyed by arson in the night of 26th to 27th October 1991, following the last performance of Bellini's Norma. ‏

Reconstruction was started in 2006 and was completed in 2008. Major international artists such as Rudolf Nureyev, Carla Fracci, Ray Charles, Frank Sinatra and Luciano Pavarotti have all appeared here.

Learn History In The Santo Scolastica Museum of Archaeology

This special museum offers you a trip back through time, covering the past thousand years of Bari's history. Strata from the late Bronze Age right on down to the modern era are preserved at the archaeological site.

Video mapping technology has rendered visible architectural elements of a Byzantine church that is incorporated into a 16th century bastion.

The Pinakothek was founded in 1928 and is regarded as Apulia's most important museum for the history of art.

One of the other collections is a photographic inventory. 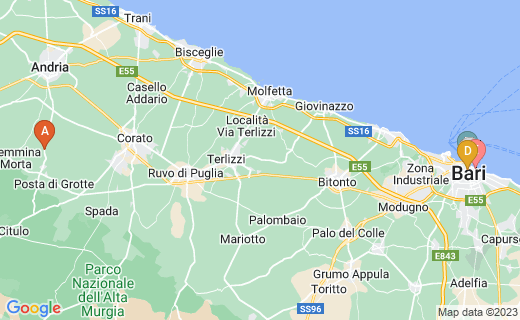