A Quick Guide To Basel Switzerland

Visit The Gate of Spalen

The Gate of Spalen was once part of Basel’s city walls and is one of the three city gates that remain in existence today. It's a listed monument and is considered to be one of the most beautiful city gates in Switzerland.

The facade is adorned with sculptural embellishments. Above the arch is Basel’s coat of arms, sculpted into red sandstone and guarded by two lions.

It's right beside the Rhine and is one of the city’s main landmarks. The red sandstone, colored roof tiles and two slender steeples are visible from afar. The former Episcopal church was built in the Roman and Gothic styles between 1019 and 1500.

There are regular events on the Münsterplatz in front of it. The "Pfalz" (palatinate) is high above the Rhine, behind the Minster. The terrace is on the Rhine and is a popular lookout point. It's possible to cross the river here on the Minster ferry.

See The Animals At Zoo Basel

"Zolli", Basel’s zoological garden, was founded in 1874, and is the oldest zoo in Switzerland. It also has the highest number of animals and species.

Although it's relatively small, it's one of the leading animal parks in Europe, thanks not least to various breeding programmes.

Enjoy The Peace Of Merian Gardens

The 135,000 square meters of the Merian Park are in the middle of the city of Basel. It is a haven of peace and tranquility in the midst of the city’s bustle.

It comprises vegetable gardens, an English Garden and botanical collections, and the "inhabitants" include hens, rabbits and sheep.

The entire park is organic and is also used as a venue of a wide range of events.

Have Some Tea At The London Tea House

London Tea is the oldest tea house in Switzerland; it was founded in London and Basel in 1896. Since then, it has stood for tea culture on the highest level. It serves first-class green tea from Japan and China, the best black tea, choice oolong rarities, and unique white and red tea specialties, as well as numerous fruit, herb, rooibos, chai and wellness varieties.

The company mixes the fragrant varieties itself on the premises, and guarantees that only the best ingredients are used. So be sure to allow enough time to dip into the world of tea.

Have A Fabulous View From The Trade Fair Tower

At a height of 105 meters, Basel’s Trade Fair Tower is located in the city's exhibition square and was designed by the architects Morger & Delago and Marques. There are 31 stories and it is made entirely of green-tinted glass.

Inside are offices for numerous businesses and a hotel, and on the top floor is the BarRouge. From here there are fabulous views of the Old Town and even as far as the neighboring countries of Germany and France.

Cool Down At The Tinguely Fountain

This used to be the stage of the Old Town theater. In 1977, Jean Tinguely placed some amusing machine sculptures in an enormous pool of water and in doing so gave Basel a new landmark.

The Swiss artist had black asphalt poured into a shallow basin and then placed these low power-operated, water-spouting objects inside it.

The nine iron eminences are in constant motion and "talk" to each other – just like the mime artists, actors and dancers who once performed on this very spot.

Enjoy Art At The Fondation Beyeler

Hildy and Ernst Beyeler spent 50 year putting together a huge collection of art. The collection was then transferred to the Beyeler Foundation.

It comprises over 200 paintings and sculptures of Classic Modernism, including works by Cézanne, Picasso, Rousseau, Mondrian, Klee, Matisse, Newman, Bacon, Dubuffet and Baselitz.

The museum is in the midst of a picturesque landscape, slightly outside Basel on the estate of the Villa Berower Gut in Riehen.

Learn About Clothes Hanger At The Kleiderbügel-Museum

There's a rather unusual museum slightly outside the city center. It illustrates the history of the clothes hanger – and contains over 4000 exhibits.

Visitors see an everyday item in a completely different light. It’s fascinating to stroll through and admire the exhibition - or even have a guided tour, which are available to groups of at least ten people. 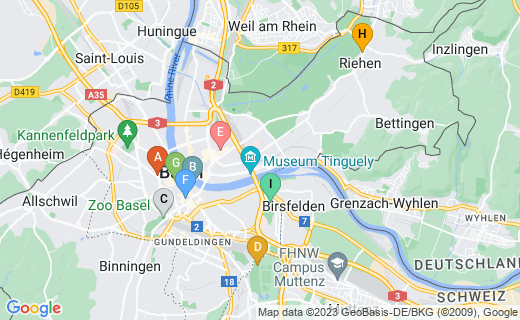