A Quick Guide To Bilboa, Spain

Some visitors come to Bilbao simply to see this museum, which opened in 1997. This temple of art, whose curves are clad in sheets of titanium, was designed by the architect Frank Gehry and serves as the precursor of modern architecture.

Depending on where you stand, the building either reminds you of a ship or the silver panels evoke the scales on a fish. The giant dog, Puppy, in front of the museum is a floral sculpture by the artist Jeff Koons. Moving inside, the museum is primarily home to contemporary art from the 20th century.

The locals also refer to the Old Town as ‘las 7 calles’ in Spanish, meaning the seven streets, because it was these seven streets that formed the city in the Middle Ages. Casco Viejo (the Old Town) is still the heart of Bilbao today and is certainly the most colorful district.

The beautiful narrow streets are mainly pedestrian-friendly and bars are lined up one after another – perfect for a pintxos tour. When you are replete, St. James' Cathedral and Plaza Nueva are only a short walk away in this same district.

Relax In The Doña Casilda Park

New green areas also emerged as a result of the city's redesign around the Guggenheim Museum. The existing Doña Casilda Park, which boasted a range of different tree species, sculptures and monuments, was expanded to an area of 100,000 m2 and now links together the Abandoibarra and Ensanche districts.

You can watch the ducks in the majestic pond or sit in the café and follow the colorful coming and goings in the park.

Climb The Basilica of Begoña

The Basilica stands on top of a hill overlooking the Old Town. An impressive triumphal arch above the entrance dominates the Renaissance facade. The other structural highlight is the Neoclassical altar inside the Basilica.

The Bilbaínos lovingly refer to the Virgin of Begoña, after whom the church was named, as Amatxo, meaning 'Mum' in Basque. You can reach the Basilica either via the Mallona steps or the lift at the Casco Viejo underground station.

Shop At The Ribera Market

There's no better way to arouse the senses than to go shopping round a food market, especially when abroad and close to the sea, where the market wares are worlds apart from those at home.

Over 60 stall-holders laud their produce at the Ribera Market, including meat, fruit, fish and shellfish, cheese, mushrooms and other delicious goods. In 1990, the Ribera Market made it into the Guinness Book of Records as the largest covered market in Europe. It is also worth checking out the market for its Art-Deco style windows.

Visit The Museum of Fine Arts

The Museum of Fine Arts stands somewhat in the shadow of the famous Guggenheim Museum. Unjustifiably so, because this museum is home to an impressive collection of around 10,000 works of art spanning from the 13th century to the present day.

Completed in 1890, the theater was named after the famous composer Juan Crisóstomo Arriaga, referred to as the Spanish Mozart, who wrote his first opera at the age of 13 and died from tuberculosis just before he turned twenty.

The magnificent building burnt down in 1914. Although it was completely renovated in the 1980's, several of the original fixtures and fittings have been maintained. The Arriaga still puts on performances, but the modern Euskalduna Palace is also an important address in the theatrical scene. 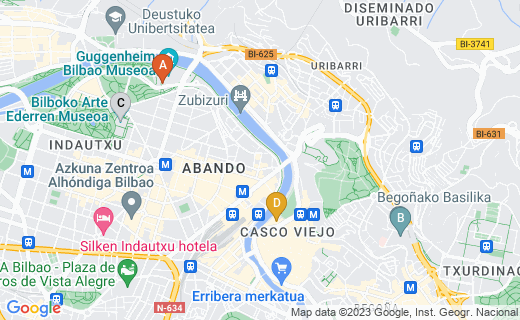