A Quick Guide To Florence, Italy

The 13th-century cathedral is the fourth largest church in the world, and together with the Ponte Vecchio is considered a symbol of Florence. The Santa Maria del Fiore is world-famous for its vast, 107 m dome, which was completed in 1434 and is considered a technical masterpiece of the early Renaissance.

The 85 m church tower is famous for its unusual facade, and has 12 bells. Inside the church are beautiful frescoes and statues of saints to admire.

Feel Romantic At The Ponte Vecchio

The world-famous Ponte Veccio over the Arno is one of the best-known sights in Florence. It is one of a total of six bridges in the city, and also the oldest. It has jewelers, art dealers and souvenir shops.

There are fabulous views of the Arno from the open middle of the bridge, which in the evenings becomes a meeting place for lovers, and countless visitors have carved their names in its masonry.

Formerly named Palazzo della Signoria, it was renamed the ‘Old Palace' when the Medici left it for the Pitti Palace.

Its tower, built by architect Arnolfo di Cambio, overlooks the Fountain of Neptune by Florentine sculptor Bartolomeo Ammannati, which was the first artwork displaying nudity in a public place.

In its courtyard, transformed into a portico by Michelozzo, stands another fountain with a copy of a bronze statue by Verrocchio.

On the first floor, in the Salone dei Cinquecento, the frescoes and paintings by Vasari will bring tears to your eyes. Among the two rows of 16th-century statues is Michelangelo's The Genius of Victory. There's also the secret and allegorical office of Francesco I de 'Medici.

On the second floor you will find the apartments of Cosimo I, decorated in mythological frescoes, and those of Eleonora of Toledo, home to a tiny chapel painted by Bronzino. It's all simply astonishing!

Take A Stroll In The Giardino di Boboli Park

The Giardino di Boboli is situated directly behind the Palazzo Pitti. It is the most famous park in Florence, and at 45,000 m² possibly one of the biggest ones in Italy. Its elegance is its trademark: the artist Niccoló Pericoli, better known as Tribolo, created a masterpiece of landscape architecture between 1550 and 1558.

Later, Mannerist works by Buontalenti, and fountains and statues by Ammannati, Giombologna and Tacca were added to the garden, and it was completed by Giulio and Alfonso Parigi (1631-1656).

The park also has a pond and a coffeehouse, and both tourists and Florentines come here to relax.

If you’re in Florence, you don’t necessarily have to go to a museum; the works of art are effectively on the streets. Florence’s Old Town is a unique collection of art, and a stroll through it is a must. It reflects the city’s unique architecture.

The wonderful buildings ranging from the time of the Renaissance to the rule of the Medici tell its history, and speak of the tremendous cultural and economic activities of the 15th and 16th centuries.

Florence’s big market hall is a veritable paradise for gourmets. As well as fruit and vegetables, fish and meat, it also sells olives and olive oil, typical Tuscan fennel salads (finocciona) and the equally typical Pecorino cheese, dried tomatoes, balsamic vinegar, truffle honey and almond biscuits (cantucci), all of which can be taken home as souvenirs and gifts.

The Castello di Ama is well worth the trip. About 45 minutes away from Florence, this is where they make exquisite olive oil and excellent wine - primarily Chianti, of course.

You either come here, to the «Ristoro di Ama», and sample the wines of Castello di Ama together with some typically Tuscan fare, or you arrange a guided tour through the winery, to get a better sense of the magic of the place.

There are contemporary art installations to admire, or you can just enjoy the fantastic view of the Tuscan countryside. Book in advance.

In the spring of 1265, a famous writer, poet and politician was born in Florence. He wrote one of the greatest masterpieces of literature: The Divine Comedy.

A few steps from Piazza dei Donati, Dante Alighieri's house evokes a medieval Florence then tormented by the military and cultural conflict between the Guelphs and Ghibellines.

Run down over time, the original building was rebuilt in 1911 by architect Giuseppe Castellucci, then transformed into a museum dedicated to the life and work of Dante. On the occasion of the seventh centenary of his birth, the Santa Via Margherita complex was donated to the Unione Fiorentina by the city of Florence.

On the first floor of the house, the city of the red lily reveals its history and Dante in his youth. On the upper floor, the painful period of exile of the poet is illustrated and documented, while the last floor invites visitors to discover reproductions of famous works by Giotto, Signorelli and Michelangelo, which highlight the iconography and reputation of Dante through the centuries. 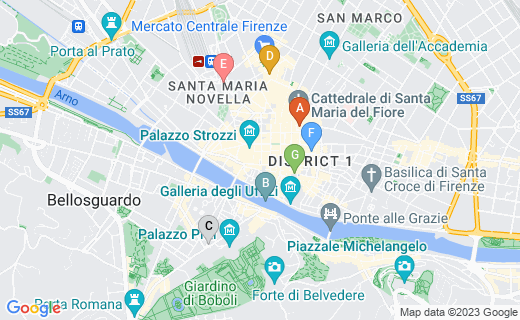