A Quick Guide To Frankfurt Germany

In 1876 the cathedral fell victim to a major fire, and was rebuilt in the Neo-Gothic style. The tower was given a steeple, since when it has soared up to a height of 95 meters.

Visitors enter the cathedral through a star-shaped vestibule with a baroque altar depicting the Assumption of Mary. The High Choir is also impressive.

The visitor center at Frankfurt Stock Exchange is an opportunity to visit the world famous rooms. In fact, there’s no charge for the visit to the gallery and the introductory talk. A VIP visit is available to book for €125 per person.

The visitor center is open from Monday to Friday, 9 am until 5 pm. You must book by phone in advance. And because numbers are strictly limited, be sure to give plenty of notice. Please bring a passport or ID card with you.

Relax In The Palmengarten

"Plants, life, culture" has been the motto of the Palmengarten since 1997, and sums up what it is that makes this garden so exceptional. Since the early days, this traditional Frankfurt institution has been a place where plants from all over the world can be discovered .

And at the same time a haven of contemplation and music, relaxation and exclusive conviviality. This is indicated by the heart of the garden, the historic "Gesellschaftshaus" with "Flora", the magnificent palm house.

The botanical garden covers 22 hectares and is home to Germany’s richest collection of tropical and subtropical plants as well as 14 greenhouses, including a cast-iron glass structure with a particularly romantic atmosphere.

Since the 9th century the Römerberg, formerly known as the Samstagsberg, has been the venue for markets and fairs, tournaments and festivals, imperial elections and coronations. In the middle of the square is the Gerechtigkeitsbrunnen, the Fountain of Justice, Frankfurt’s first fountain.

It's also the site of the Römer, Frankfurt’s town hall. The eastern part of the Römerberg is notable for the impressive half-timbered houses. They bear proud names such as Goldener Greif (Golden Griffin, Grosser Engel (Large Angel) and Schwarzer Stern (Black Star).

The Saalgasse with its colored buildings also leads to the square.

St Paul's church is considered one of the most important buildings in German history. It had only served for a few years as a church when it was used in 1848 for the first German National Assembly.

It's still considered as a symbol of freedom and democracy today. Bombing in 1944 caused St Paul's Church to completely burn down, before being rebuilt after the war. Today, the historic building is primarily used for exhibitions and events.

Be Sweet At The Bären-Treff

If you like sweets, be sure to pay a call to the Bären-Treff - it’s a veritable fruit gummi paradise! Choose from over 100 varieties in all sorts of colors, shapes and flavors, ranging from traditional fruit to sugar- or gelatin-free bears.

Vegetarians and diabetics don’t have to miss out, either. And then the special blends: ginger sticks or green tea leaves. Delicious! 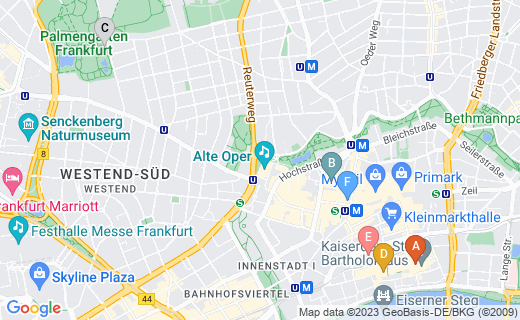