A Quick Guide To Naples, Italy

The Cathedral of Santa Maria Assunta, also known as the Duomo di Napoli or the Duomo di San Gennaro, is situated in the old town and is one of the largest churches in Naples.

Its diversity of names stems from the fact that the 13th century building is dedicated to the Madonna dell`Assunta, but is named after the patron saint San Gennaro by the people.

An ampule of San Gennaro’s dried blood can be found in the cathedral’s chapel. In May and September believers pray for the liquefaction of the blood, which promises earthly happiness for Naples.

The National Archaeological Museum in the old town houses large art collections from old aristocratic families, such as the Farnese and the Borgia. The vast number of ancient artifacts from Pompeii and Herculaneum make it the largest museum of ancient art and the most important archaeological museum in Europe.

Be Amazed In The Metro Of Naples

Never will the desire to take the metro be as strong as it is at Naples. You'll even want to go down to the city's underground just to admire the fantastic decor.

Indeed, 15 stations of Line 1 (Garibaldi, Università, Dante, Vanvitelli) nicknamed ‘Metro of the Arts' and a few on Line 6 (Mergellina, Augusto, Lala and Mostra) welcome onlookers, impressed by so much creativity.

These art galleries have come into being thanks to a hundred artists, designers and architects, such as Alessandro Mendini, Karim Rashid, Anish Kapoor and Sol LeWitt.

More than 200 works were spread out among the different stations that you can admire with the modest price of a metro ticket.

Considered one of ‘Europe's Most Impressive Underground Railway Stations' the Toledo stop which was designed by creators on the theme of water and light, has two impressive blue-toned mosaics with LED panels that are set off by your passage. A sensational and aesthetic experience.

See Masterpieces at the Madre

In the heart of old Naples, a stone's throw from the Duomo, an imposing 19th-century palace has been transformed into a contemporary temple of art by Portuguese architect Álvaro Siza. Popularly known as the Madre, the Donnaregina Museum of Contemporary Art will quench your artistic passions beyond all expectations.

As you wander through its large exhibition rooms, you will be knocked off your feet by Andy Warhol's screen prints, Richard Hamilton's collages and Sol LeWitt's geometric creations. Spread over two floors, the Madre's permanent collection cannot fail to overawe with its pop art and minimalist masterpieces. Standing in front of Italian visual artist Mario Merz's igloos or Luciano Fabro's crushed metal sculptures, you will grasp the concept of Arte Povera, an art movement that emerged in Italy at the end of the 1960's where artists transformed everyday, non-traditional materials into works of art.

You take one last look at Robert Mapplethorpe's photographs of nudes, before bringing your visit to an end, overwhelmed by this profusion of creativity.

Pop art buffs, did you know that Naples enjoys a special relationship with this artistic movement? If you need any more convincing, make your way to the Andrea Ingenito Contemporary Art gallery, near to the Royal Palace.This renowned gallery owner has displays of works by Andy Warhol and Roy Lichtenstein, but also by prominent Italian painters. 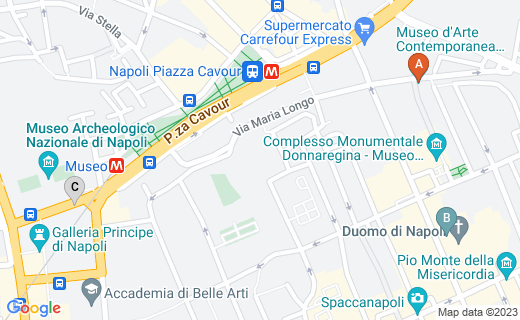