A Quick Guide To Oslo Norway

Oslo’s modern opera house is made of concrete, marble and glass, and is without doubt one of the most spectacular opera houses in the world. Bright white and built into the bay, the unique architectural landmark is reminiscent of a floating iceberg.

And just as with a real iceberg, most of the opera house is below the water level. You can go for a walk over the roof of the building (there is no charge for this), or perhaps attend the unique productions in one of the magnificent auditoriums.

This medieval is a must for any visitor to Oslo. Akershus was built by King Håkon V in 1299, and extended in the 14th century. There are guided tours in summer, during which one can learn everything about the moving history of the fortress.

Enjoy The View From Holmenkollen

Aside from the many sporting activities on offer, the Holmenkollen offers breathtaking views of the Oslo fjord and over the entire city. The ski jump is as impressive in summer as it is in winter.

It's used for jumping during the cold season, and for the warm season is filled with water and used as a public swimming pool. It’s also a great spot for mountain biking – and strapping your skis on in winter. Oslo’s local recreation area.

The Ibsen house, as it may currently be seen, was established in 1990 after a Norwegian actor purchased the author's apartment. He decided to open it to the public and, thanks to the Ibsen family, was able to put the furniture back in place.

You may be seized by the strange feeling of being in the shadow of the famous writer, as the place has been restored with rigorous respect for authenticity.

It's a wonderful opportunity to delve into the masterly world of the Norwegian author. Born in 1828, he came to prominence through plays like A Doll's House and Hedda Gabler, two oppressive and distinct dramas.

Even today, his plays are regularly performed in packed theatres around the world. After your visit, you will also be able to follow in the footsteps of the playwright during a walk in the city, which will take you on the actual Henrik Ibsen Street, right through to the Grand Café, where the author liked to drink schnapps.

The visit takes you on a charming journey back in time and is ideal for literature lovers.

At the end of Karl Johans Gate shopping street is the Royal Palace, in the midst of a 22-hectare park. The palace is still home to the Norwegian royal family today, and with its three-storey main wings is not dissimilar to Buckingham Palace in London.

Thanks to its central location, the Royal Palace – like the town hall and parliament buildings – is within easy walking distance. Guided tours in English are offered every day at 2 p.m. and 2.20 p.m.

Be Amazed In Vigeland Park

Gustav Vigeland was Norway’s leading sculptor. The park of the same name is in the Frognerpark, a public park in the middle of Oslo. The Vigeland Sculpture Park contains around 200 sculptures by the artist, made of stone, iron and bronze.

The sculptures on the large bridge in the park representing the entire life-cycle are particularly impressive. Opening times: All year round, around the clock. Admission to the park is free.

Being in Oslo affords a unique opportunity to learn more about this award and its creator. Alfred Nobel, a prestigious Swedish chemist, invented dynamite in the late 19th century and made a fortune through this discovery.

During his extensive research, he detonated several explosions, one of which was particularly severe, killing his brother in 1864. At his death, he bequeathed his vast fortune to the creation of the Nobel Peace Prize, which was to reward those who have ‘done the most or the best work for fraternity between nations, for the abolition or reduction of standing armies, and for the holding and promotion of peace congresses'.

This prize was awarded for the first time in 1901, and you can discover the faces of the winners during your visit. Martin Luther King, Mother Teresa, and Barak Obama are part of this wall of glory and peace. Guided tours and lectures, as well as activities for children, ensure a moment of historical and cultural value.

Instead of strolling around one of the city’s parks, visit the Losæter urban farm. Located on the waterfront in the Bjørvika neighborhood, the former container port has been transformed into common land.

In addition to a number of farming projects producing a profusion of flowers and vegetables, here you can also find a therapeutic sensory garden created by people with dementia, the Flatbread Society, a field of ancient grains, a bake-house, and more. 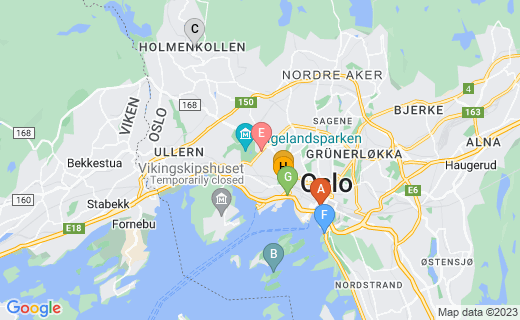