A Quick Guide To Venice, Italy

This neo-Gothic palazzo is one of the very few buildings with a garden on the Grand Canal. It’s one of those places that impresses visitors with its many elements, from the chandeliers to the architectural details, from the beauty of the rooms to the amazing surroundings of the Accademia Bridge.

The Palazzo Franchetti does not only hosts the Glasstress exhibition, but also a variety of other interesting and inspiring shows worth checking out.

All The Art You Need In The M9 Museum Quarter

Located in Mestre, Venice’s urban mainland, the M9 museum quarter is a kind of independent multi-functional smart-city inside an actual one, a new landmark to discover instead of the often overcrowded museums on the island.

A project of the Fondazione di Venezia, this museum about a cultural inheritance is the biggest multimedia venue in Italy reflecting the country’s history throughout the 20th century. Rather than focusing on conventional storytelling through rough facts and dates, the exposition reaches audiences by introducing them to the transformations of everyday life, changes in society, lifestyle, territory, and the contradictions in economics and politics in Italy.

Take A Picture From The Rialto Bridge

The Ponte di Rialto or Rialto Bridge was the first bridge in Venice to span the canal. It was originally a little wooden structure but today it’s an ostentatious monument. The bridge is about 50 meters long and 20 meters wide. It would be a shame to visit Venice and not see it.

Especially since nearly every road crosses it. Practically every lane in the city has a sign pointing the way to the Rialto Bridge. Just beyond the bridge there is also a pier for visitors to come and go by water. The bridge is flanked on both sides by one souvenir stand after another. Take heed, though, that there are better places to buy stuff.

Take The Boat On The Grand Canal

Hop in! A gondola ride is an integral part of any trip to Venice! The Canal Grande or Grand Canal is just over four kilometers long, 30 to 70 meters wide and the main waterway through the Floating City.

It’s spanned by four bridges. There’s nothing more romantic than travelling along the Grand Canal and then the smaller canals in the city. It’s a recommendable way to explore the city, using the beautiful city as your backdrop. Around 500 gondolas work the canals, so it’s best to understand quickly that you won’t be entirely alone during your ride.

The Palazzo Grassi is one of the largest and most famous palaces in Venice. The place has undergone extensive renovation and the only element remaining of the original interior is the stairwell and its fresco's.

A glass roof covers the interior courtyard. The palace was acquired by the French industrialist François Pinault in 2006. He chose it as a exhibition space for his comprehensive collection of modern art.

Stop At The Libreria Acqua Alta

The Libreria Acqua Alta is the world’s most quirky bookstore. Acqua alta means ‘high water’ and is a reference to the disturbingly high tides that flood Venice almost every year.

Ironic as it might seem, books at this truly one-of-a-kind bookshop are stored not only on shelves but also in an old gondola and bathtubs.

From travel guides and maps to photo albums, vintage books, literary classics, and unique postcards, the narrow space is stuffed from door to ceiling with stacks of books, all guarded by a couple of fluffy cats.

As you reach Venice by vaporetto, you will catch a glimpse of Santa Maria della Salute Basilica, gem of Venetian architecture adorned with two domes and bell towers that about a hundred statues surround with harmony.

The main facade, in classical style, is decorated with half columns while the rest of the building is Baroque-inspired. Once inside, a large staircase takes you to the heart of a large central area, surrounded by six chapels richly decorated with paintings by Tintoretto and Titian.

In front of your eyes, the marble floor with geometric patterns is remarkable. It was in 1630 that the construction of the basilica was decided, in order to appeal to the good graces of the Virgin to put an end to the spread of the ravaging plague at the time.

Work of famous architect Baldassare Longhena, the structure was built on marshy ground, which required engineers to regularly stabilize it using wooden stilts. Symbolic representations of Mary are plentiful and especially adorn the high altar. 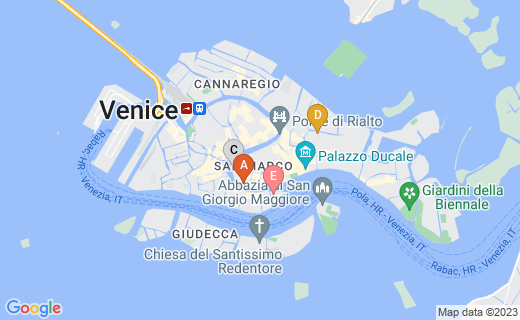