A Quick Guide to Castelbuono in the Madonie Mountains

Castelbuono is a town and municipality of nearly 9000 inhabitants located in the north of Sicily. It rises about 423 metres above sea level on the slopes of the Milocca Hill with Gibilmanna and Cefalu to the north west, the main elevations of the Madonie mountains to the south, Pollina in the north and San Mauro to the east. It is part of the Madonie Regional Natural Park or 'Parco delle Madonie' created in 1981 to encompass a number of towns and the area of the Madonie mountains. The region is of special interest to naturalists as it houses over half of the native plant, bird and invertebrate species of Sicily, and examples of all of the native species of mammals in Sicily. The region was included in the UNESCO World Geographic List in 2015.

Traces of first settlement of the area date back to neolithic times when the Siculans, one of the original Sicilian communities, were believed to have populated the location as far back as the third millennium BC. Greek/Roman civilisation was established in the area later followed by the Byzantines who left their mark. Arab-Norman civilisations then moved into the region in medieval times. There was Spanish influence in Sicily for some time from the medieval period.

The town welcomes many visitors during each year. A modern Indie music festival, the Ypsigrock festival, is held annually in the town and music fans attend and camp nearby during the event. Also of note to tourists, the town has a local product which it has sold since the 19th century, known as manna, which is made from the sap of ash trees, and said to have health properties.

There are a number of historical buildings of interest to visitors, not least the Castle. The name Castelbuono originally meant 'Castle of good air' ('Castello del buon aere'). The town is dominated by a huge medieval castle located on a hill in the middle of beautiful countryside, over which there are panoramic views.

History of Castelbuono from Medieval Times

The medieval history of the town was first documented in 1329 when Count Francesco Ventimiglia declared to the bishop of Cefalù that he 'holds the woods and lands of S. Maria di Bisanzio in Castri Boni territory'.

In fact, some of the population of nearby Fisauli moved there in 1269 when it was just a stronghold with the purpose of overseeing the surrounding land. This settlement had about three hundred inhabitants at the beginning of the 14th century with three churches existing and was a center of some importance.

In the fourteenth century the Ventimiglia family arrived in the county of Ypsigro and the castle was built. The lineage of the family, dating to the twentieth century, can be traced. The Ventimiglia family were an important political family whose rule extended to various areas in the Madonie. They were related to Emperor Frederick II, and came from the Maro County of Liguria, arriving in Sicily in the middle of the 13th century.

Enrico (Italian for Henry) Ventimiglia began the Sicilian branch of the house and was married to Countess Isabella, a descendant of Duke Serlo II of Altavilla, who governed the nearby county of Geraci. As a result of this marriage, Henry became the Count of Geraci.

In 1454, Giovanni Ventimiglia I took charge and decided to transfer his court to Castelbuono; this event led to some cultural and economic revival in the town.

In 1595 Giovanni Ventimiglia III became the Prince of Castelbuono, and the area became consequently 'the capital of the State of Geraci'. The Prince, known as the Prince of the Academy of the Star, organized a platoon of honor known as the "Knights of the Star", consisting of young people who were trained in the exercise of arms and riding skills. The training camp was enclosed by the wall on the eastern outskirts of the castle. There were further religious, cultural and artistic developments thanks to the Prince who entrusted the Cappuccini fathers and the Dominican fathers with providing public education, and religious accommodation was built for them, annexed to churches. In 1614 the Venus Ciprea fountain was placed on the main square.

Castelbuono gained the status of "city" in 1632 and churches, convents and fountains were built throughout the second half of the century. The castle was restored and the Ventimiglia family built a theater. In the last decades of the eighteenth century, the city had become the center of interest for some of the noble families of the Madonie. The last of the main branch of Ventimiglia di Geraci was Giovanni Luigi VIII, and when he died in 1860 the titles went to Carlo Antonio II Ventimiglia of the Princes of Grammonte.

As part of the resurgence throughout Italy, which led to the Italian Republic being formed, the town participated in the revolt against the Bourbons in 1848 and 1860, receiving praise from Garibaldi.

After 1900, the modern history of Castelbuono began. Two world wars and the difficult politics of that time affected the town, as many others at that time.

At one time in 1924, the town awaited the arrival of Mussolini for a visit and the town prepared for the event. However it was said that he didn't get out of his Alfa Romeo, and simply shook the Mayor's hand before quickly departing, leaving much speculation as to the reason, some thinking it was due to some recent political opposition.

Some years later, after the fall of fascism, in September 1943, Captain Kelly established the first municipal council, and appointed a mayor. There followed modern local administration which continues to this day.

Church of the Matrice Vecchia 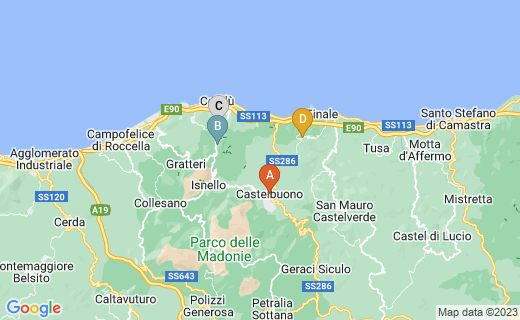 Things to See and Do in Castelbuono

The spectacular Castle of Ventimiglia dominates the town, having a wide staircase leading to its entrances. The castle was built to serve as a residential palace for the aristocratic Ventimiglia family. The exact foundation date of the castle is evidenced by a stone that lies over the entrance arch of the manor. The engraving in Latin translates as the following: 'The year of the incarnate 1317, reigning the glorious Federico, King of Sicily, we, Count Francesco of Ventimiglia, Greater Ischia and Geraci and Lord of the two Petrias, we began to build this Ypsigro Belvedere castle in the name of Christ'.

There is a museum in the well preserved castle which houses artefacts as well as occasional small exhibitions. A sense of what it was like to live in the castle is conveyed in the displays. There are also remarkable views of the town and surrounding countryside from the upper floors. Within the castle, the Palatine chapel has a beautiful ornate altar embellished with pure gold leaves with a reliquary containing the skull of St Anne, who is the patron saint of the town.

Along the main street, Corso Umberto I, the fountain of Venus Ciprea is found, depicting Andromeda, Venus and Cupid together with sculpted images relating to stories of love.

Visitors will notice a local product, known as Manna, being sold in the town. Families of nobility, in the 19th century, contributed to the cultural and economic development of the region through the production and sale of manna to the nearby city of Palermo. The manna is made, in a traditional way, from the sap of ash trees. The product is still made today in Madonie, being promoted as useful both in gastronomic and homeopathic fields.

Throughout the year there are various festivals. For food lovers, there is a mushroom festival held in October and the Testa di Turco festival in early December which showpieces a typical local dessert. During the Feast of St John in June, traditional pots of boiled potatoes and beans are prepared. For modern music enthusiasts an annual Indie Rock and alternative music festival, known as 'Ypsigrock', is held in August, near the castle in Castlebuono, and some festival goers also pay to camp nearby during the event.

On certain days there is more to see; the town is also known for its slightly quirky yet traditional street cleaning donkeys! They are necessary for access to some narrow streets.

A great feature of Castelbuono is an old cathedral, the Old Matrice (Madrice in Sicilian), a spectator 14th century church near the town square where there are frescos of saints on the pillars and a striking polyptych styled altar piece. In the vault beneath are more memorable frescoes depicting Christ and the biblical mysteries.

The New Matrice church (or 'Madrice' in Sicilian) originating from the 17th century houses several works of art within. The church of St Francis in the town dating back to the 4th century contains tombs of the Ventimiglia family.

The Museum of Francesco Mina Palumbo houses geological and natural history exhibits. It also has a collection which includes animal and plant illustrations.

There are plenty of places to relax and enjoy the sights, the town having cafes with terraces throughout. There are some good restaurants and it is also possible to locate fine dining, some of which the author has experienced on visiting. Palazzaccio on Via Umberto and Nangalarruni on Via delle Confraternite have both had Michelin 'Bib Gourmand' awards.

Behind the castle is a park with a spectacular viewing point and there are also places towards the town's outskirts, just off the road descending, where tourists can stop on their journey and enjoy the panoramic views.

Artwork Inside the Old Matrice Vault

Places to Visit Nearby

The Madonie Regional Natural Park is popular with walkers and hikers and there are many towns and villages to visit throughout. To the north lies the beautiful Sicilian coast with seaside towns along the way, including Cefalu which is popular with tourists.

Palermo, the capital city of Sicily lies to the north west and has many magnificent architectural sights such as its Cathedral, as well as pleasant squares and parks. It is also a modern city with good retail outlets.

Views of the Madonie Region From Castelbuono