A Quick Guide to Milan, Italy

Milan’s identity oozes style and grandeur.The culmination of that identity is perfectly reflected in the spectacularly extravagant Gothic cathedral, the Duomo di Milano. The impressive façade is a forest of spires and intricate statues glowing pearly white, the impressive details shooting up towards the clear, blue sky.

Construction began in 1386, with architectural styles going in and out of fashion over the almost 600 years it took to complete the cathedral. The final touches were only put on in the 1960s. The view from the top is just as magnificent.

Another great show of wealth and architecture lies directly adjacent to the cathedral – Galleria Vittorio Emanuele II. This gaudy shopping arcade is a soaring structure wrought from iron and glass, walls beautifully arching up towards a roof of glass panels that glow with the changing light of the day.

Back on ground level, you find flagship stores for fashion brands, boutique shops, and expensive restaurants. As the Milanese wander across the mosaic tiled floors calling out to each other in greeting, it’s easy to see why this incredible structure has earned itself the nickname il salotto di Milano, or Milan’s drawing room.

MUDEC ( Museo delle Culture) is a 17,000-square-metre complex designed by architect David Chipperfield, built in an old industrial factory, and now home to a grand number of cultural and artistic displays.

Have A Tea At Chà Tea Atelier

This little heaven for tea lovers is the brainchild of Gabriella Lombardi, the first certified TAC Tea Sommelier in Europe and the author of the book Tea Sommelier (White Star Publishers, 2015).

The tea room and shop specialises in high-quality loose-leaf teas and stocks more than a hundred teas from different regions, all selected by Lombardi herself. Drink a properly made matcha and enjoy a piece (or two) of the delicious cakes displayed on the counter.

Formerly a Dominican convent, the Church of Santa Maria delle Grazie houses one of the most world’s most famous murals – Leonardo da Vinci’s Last Supper. The famous artist painted the fresco on a wall in the convent’s former dining room during the late 15th century.

Since then, the painting has been restored several times. In 1999, new access restrictions were implemented to protect the fresco from further deterioration. For example, to make sure that the room retains an optimal temperature, no more than 25 people at a time can be inside of it. In spite of the strict rules and long queues of visitors, it is worth waiting in line for a chance to see the mural up close.

Have an Ice-Cream at La Prossima Fermata

Located in the outer district of Bicocca, La Prossima Fermata (meaning ‘the last stop’) has been indulging Milan’s sweet tooth for over a decade. But only recently did it get an interior that matches the divine goodies it offers, for example, the sorbet made with white peaches and Prosecco di Valdobbiadene, a lemon-lime-basil sorbet, and other mouth-watering flavors made from only the freshest of ingredients.

Founded by the Prada family, the Fondazione Prada is a museum that displays impressive modern artworks from the 20th and 21st century. The complex of museum buildings occupies almost an entire city block in Milan’s Largo Isarco district.

It's located on the site of a distillery that was built in 1910 and converted for the use of the museum by Dutch architect Rem Koolhaas. The complex’s four-storied Haunted Housetower is covered in 24-karat gold leaf, contrasting markedly with the ascetic architecture and grey concrete walls of the other buildings.

The tower houses a permanent exposition with installations by American sculptor Robert Gober.

Milan has a great combination of underground vibes and classy taste. Culture and events are big components of the city, and there's a lot of Liberty- and Art Deco-style beauty all around the city. Some of the most beautiful places are the gardens found in the courtyards of residential buildings.

Via Monte Napoleone is a street known worldwide for fashion, a place where you can see some very remarkable window displays of top brands. Definitely one of the most outstanding shops is the Bulgari store at Monte Napoleone 2. Created by star architect Peter Marino form New York City, it contains an amazing blend of art and design. 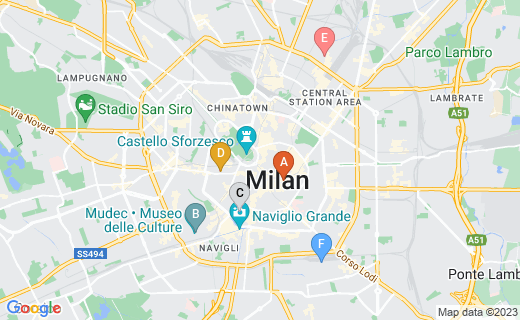