A Quick Guide to Visiting Larnaca

Larnaca is a city on the southern coast of Cyprus within a larger administrative region, also known as Larnaca. It is a tourist and seaside resort of over 51,000 inhabitants.

In antiquity, Larnaca was known as Kition, and said to have connections to one of the descendants of Noah, Khittim, who founded the city of Cition or Khittium. Today Larnaca celebrates a flood festival each year in early summer to celebrate survival from the biblical flood. Larnaca took its modern name from the ancient tombs in the area, known as "Larnax" in Greek.

In the middle of the town is the Saint Lazarus Church, beneath which is found the second tomb of Saint Lazarus, known as the man in the Christian New Testament whom Jesus brought back to life from his first tomb after being there for four days. It is said Lazarus later moved to Cyprus where he lived for a number of years, becoming the Bishop of the region. Another site of worship is the church of Panagia Faneromeni which has an ancient royal mycaenium tomb nearby which became a later place of Christian worship.

Close to the northern seafront of Larnaca is the port by which is found the statue of Zeno or Zenon, another famous inhabitant and a Greek philosopher from Larnaca who founded the Stoic movement. A medieval fort and museum dominate the seafront promenade in the centre of the town, between the many restaurants and cafes that lie close to the sandy beaches. The Pierides museum further west, by a high street shopping area, houses important collections of ancient Greek pottery and other interesting displays.

Near to the airport, a large salt lake area, overlooked by a viewing park at the north western side, is a spectacular sight, reflecting the different light qualities during the day. In season the lake region is renowned for the flocks of flamingoes that gather there. Nearby is a medieval shrine and an ancient sanctuary site.

Today Larnaca is important for travel, having both an airport and a seaport for both passenger and cargo traffic, as well as being a thriving tourist destination. There is an interesting historical background and amidst this, things to see and do for visitors. The island of Cyprus is famed for its warm mediterranean climate and favorable sea temperatures which attract tourists over a large part of the year.

Larnaca has ancient foundations in that it has been settled by several cultures going back to earliest times in human civilisation. According to legend, Khittim, one of the sons of the Hebrew biblical Javan, a grandson of Noah, founded the city almost 6000 years ago and thus it was known as Khittium or Kition/Citius. To this day the city celebrates the festival of Kataclysmos, fifty days after Easter time, in the early summer, in celebration of Noah's salvation from the flood. During this time the city comes alive with entertainment, stalls and celebrations.

Larnaca is one of the oldest continuously inhabited places in Cyprus. It has been an important port on a shipping route going back as far as the time of the Pharaohs when it shipped timber at a time when Cyprus had forests throughout. Artefacts from the Akkadian, Phoenician and Greek cultures have also been found there. The Mycaenian Greeks established a major copper trading centre in Larnaca around the 13th century BC. There has also been trade in salt and fine textiles.

A famous ancient inhabitant was the philosopher Zeno born in 333 BC and founder of the Stoic Philosophy. In Zeno's school of thought virtue was the only quality and moral weakness the most undesirable trait. He believed in harmony with the inner spirit. A statue in his honor is found in the city square by the main port in the north of the town.

Saint Lazarus was a friend of Jesus whom Jesus is said to have brought back to life in one of his most famous miracles. Following the early persecution of Christians, after Jesus died, Lazarus is said to have come to Cyprus where he was anointed Bishop of Kition, the old name for Larnaca. His church is found today in the middle of Larnaca and is revered as one of the most sacred sites in Orthodox Christianity. Beneath the church the second tomb of Lazarus is found where he was laid to rest when he finally departed life (although relics are moved elsewhere). Saint Lazarus church is a spectacularly ornate church and attracts many visitors annually, as well as to the crypt and nearby museum.

Apollonius of Kition was a famous Cypriot physician of the ancient world who wrote several important books on medicine, and a statue is dedicated to him in one of the town's squares.

Hala Sultan Tekke is a muslim shrine near the Larnaca Salt lake dedicated to the wife of an important person in islamic history. The site is also thought to have had importance in prehistory as remnants from different cultures have been found. The area is thought to have been an ancient burial site and perhaps a sanctuary. Today the site is a listed ancient monument, not belonging to a particular religious faith and is visited by the public.

In the middle ages, Larnaca fort or castle began as a Byzantine fort in the 12th century and received further fortifications in the fourteenth century when Larnaca became an important trading port for the Kingdom of Cyprus. There was a period of Ottoman rule in Cyprus and some of the decoration in the fort reflects this. Later when there were periods of British administration in the 19th and 20th centuries, the castle was used as a prison and when Cyprus became independent it was converted to a museum.

Happiness is a good flow of life 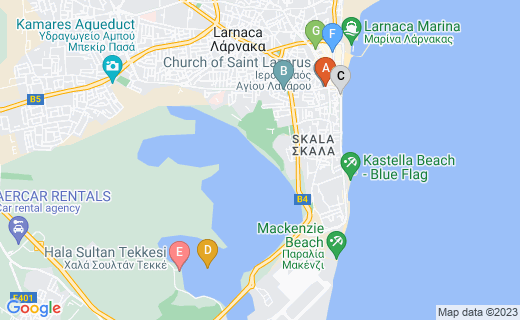 If you have the spare time on a holiday do you choose the beach, a museum or something else?

Things to See and Do in Larnaca

Larnaca is a popular beach tourist destination and has pleasant sandy beaches along its seafront. As is often the case in the mediterranean some areas of beach have cafes and seating with parasols which can be accessed for a charge. There are many bars and restaurants providing both local products throughout the town, and some popular franchise food in the most touristic areas. There are a number of hotels and guest complexes catering for a variety of visitors.

Most people fly into Larnaca via its international airport and they are likely to have a view of the Larnaca Salt Lake area in this part of the town. Near the lake is the Hala Sultan Tekke shrine. There is also a viewing park on the hill just behind the large salt lake over the wide, white lake where spectacular sunsets can also be viewed on some clear evenings. Most of all, at certain times of the year, flamingoes migrate to the lake area and make a impressive spectacle.

Larnaca castle fort and museum is open to the public for an entrance fee and has artefacts relating to the history of the area including cannons and gun carriages. Within are displays relating to Turkish and to British rule, and outside there are spectacular views from the top of the fortifications.

The Pierides museum has a large number of artefacts relating to the earliest civilisations including numerous collections of ancient pottery. Sometimes there are other displays such as modern art exhibits.

The Church of Saint Lazarus is a holy site in Christian and Cypriot Orthodox tradition and visitors can expect to cover their legs with a cloth before entering. The decoration is very ornate and chandeliers hang from the roof. Under the church in the crypt is the site of the second tomb of Lazarus though the relics are moved elsewhere. Behind the church is an interesting religious museum where there are antiques relating to Christian worship.

The church of Panagia Feneromeni is found off a busy thoroughfare to the west of the town and has a small church built over an ancient construction, thought originally to have been a pagan temple or tomb of mycenaean royalty. Use by later Christian believers saw the installation of an altar. The church site is said to have 'magical' properties by believers and locals.

By the main seaport in the north of the town can be found a landscaped square with a statue dedicated to Zeno or Zenon, the town's famous philosopher and founder of the Stoic movement. Towards the square are some artists studios showcasing local creative talent.

All things are part of one single system, which is called nature; the individual life is good when it is in harmony with nature

Places to see Near Larnaca

Larnaca is near to some popular tourist destinations such as Ayia Napa, with its many bars, clubs and restaurants, to the east and Limassol to the west. Both also have sites of special historical interest for visitors. Cyprus has good road links and is accessible by taxi or hire car. Further west is the city of Paphos which has large shopping areas as well as further historical sites for visiting including the Tombs of the Kings. It is also a popular holiday destination with its own airport.

To the north of Larnaca the large capital Nicosia is found by the northern Turkish part of the island.