A Quick Guide to Visiting Padua

Padua, or Padova as it is known in Italy, is a vibrant city in the Veneto region of Northern Italy, known for a student population attending one of the oldest universities in the world, founded as a medieval law school back in 1222. It diversified into astronomy, medicine and theology and continued to expand. Padua University is now one of Italy's main universities and consequently the city is also well known for the many students getting about, often on bicycles, and gathering in the city’s piazzas and cafes. The historical hub of the old town is still a reminder of the days when the city and its university flourished in the late Middle Ages and Renaissance era as a center of learning and art. It is noted for its historic beauty and cool waterways yet many visitors bypass Padua on their journey to nearby Venice. During the peak season some tourists stay here when Venice’s hotels are full.

Whether stopping for the day or staying a little longer, Padua is a wonderful place for the discovery of art and for enjoying strolls along its elegant alleys and streets. Some of the best places to visit are the revered pilgrimage site of the Basilica of Saint Anthony of Padua, in front of which is an equestrian statue by Donatello, and the magnificent restored Giotto’s frescoes in the Scrovegni Chapel. The Duomo or Cathedral of Padua is really worth visiting, a rather humble exterior approached from the Piazza del Duomo revealing a large elegant church interior kept in fine decoration and more surprising still, adjoining in the Baptistery which is dedicated to St John the Baptist, are preserved some of the most important frescoes of the 14th century, a masterpiece created by Giusto de Menabuoi. The medieval town hall buildings by the marketplace and porticoed alleys could easily take your mind back to another era as the city carries on its business in earnest amidst its decorative history.

Padua is situated about 10 km north of the Euganean hills and about 20 km west of the Venice Lagoon. The Commune of Padua covers territory over 92 km² lying on flat terrain and interspersed by various watercourses, which have given shape and protection to the city for centuries as well as providing a water source over the years for industry.

Tips for Travel to Padua or Padova

Just before you travel it is a good idea to practice a few key phrases to enable you to enquire about taxis, buses and trains on arrival. If you don't know many Italian words, it is worth taking a phrase book or accessing an audio book or smartphone app.

International travellers mainly fly in to the Veneto region, where Padua is situated, via three main airports, Venice Marco Polo, Treviso and Verona.

Buses in Italy are usually coaches with air conditioning, which run throughout the day at regular intervals providing a popular and direct means of travel. Tickets are usually bought from ticket kiosks near the main stops or from some newsagents. The conductor or driver will need to validate the ticket on entry. Train stations have machines for train ticket validation which is required before starting the journey.

From Venice, travellers can aim for Mestre train station and then take a direct train to Padua. The journey takes about 30 minutes. Padua can be accessed by train from other parts of Italy as it is at a hub of various railway lines and it is possible to travel there from other cities on main lines such as the following

Once in Padua, most areas in the centre are easy to walk around, although cycling can be popular and there is a bus and tram system. Cycles can be hired from the rail station. There is a traffic limited zone and also routes that cycles also cannot go onto, for example, due to the tram system. 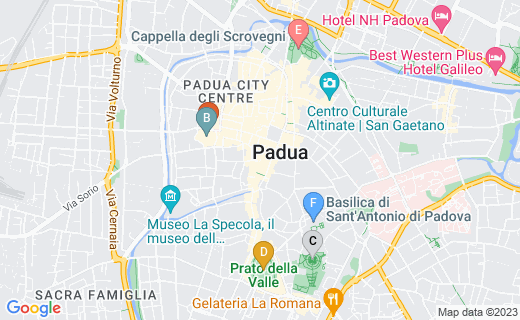 Places to See in Padua

St Anthony is the patron saint of Padua and also of many places in Portugal where he was born. He is known as the patron saint of lost things. The Basilica of St Anthony was completed in around 1310 and in it rest the relics of the saint himself, placed there during the 17th century. It has some religious significance in that it is one of eight international shrines designated by the Catholic Church in Rome. It has embraced the modern age as the church has web links, run by the friars, to social media, a webcam livestream and the possibility of sending an online prayer.

Behind the Basilica of St Anthony lies "Il Prato". The Prato della Valle is a public Square landscaped in the 18th century which contains an impressive 78 statues in rings around the area. It is a place where people like to stroll, talk and relax.

The Botanical Garden of Padua (Orto Botanico), founded in 1545 by the Venetian Republic, is claimed to be the world's oldest academic botanical garden that is still in its original location. The garden, affiliated with the Padua University currently covers about 22,000 square meters, and is known for its special collections and historical design. Further the garden is designated as a UNESCO world heritage site as being the originator of all botanical gardens throughout the world, and represents the birth of science, having made a profound contribution to the development of modern science, notably including botany, medicine and chemistry.

Padua Cathedral stands on a site where there has been a place of Christian worship over hundreds of years and the current cathedral was modernised and reconsecrated in 1754 as the Basilica of St Maria Assunta. Its spaces within are impressive; the presbytery is designed with the input of the famous renaissance artist, Michelangelo. It is a good place to sit and contemplate and the parish itself, apart from being very active, is also the seat of the Bishop of Padua, Next to the Basilica is the Baptistery which dates back to the twelfth century. After buying a ticket it is possible to view the medieval frescoes which in their intricacy and detail are quite breathtaking despite a little damage in places. The colours of the frescoes are particularly vivid and the depictions of the saints, and also the apostles with Jesus at the last supper are memorable.

There are even more beautiful frescoes at the Scrovegni Chapel (Cappella degli Scrovegni), which are fully restored and well worth visiting.

More About Padua and District

Whether you decide to stay for a few hours or a few days there is plenty to occupy a curious tourist. There are also shopping areas with familiar stores and stylish cafes with terraces dotted throughout. Only a short train ride away are the islands of Venice with their unique architecture lining the canals and not far away are some nice beaches. Just outside of Padua are the Euganean hills famous for their spas enjoyed since Roman times and medieval towns such as Monselice, also accessible by train.