Puerto de la Cruz is a municipality and city located in the north of Tenerife, one of the Canary Islands (Islas Canarias). It is part of the province of Santa Cruz de Tenerife, Santa Cruz being a joint administrative capital city of the Canary islands along with Las Palmas. Puerto is also located not far from the Teide National Park which is a Unesco World Heritage Site. Originally a small port, Puerto is known for being a place of modern tourism but it was the first Spanish tourist destination for Europeans in the late 19th Century when a sanatorium was created as a health and wellness center.

Situated on an island, in the eastern Atlantic region, about 600 miles by air from the coast of northern Africa, its history goes beyond European settlement and there is evidence of earlier aboriginal roots. These and other historic inhabitants are evidenced by archaeological finds, including a nearby necropolis.

Puerto de la Cruz was located at a hub of world shipping, and during the age of explorers it saw many types of trade pass through its port, as well as dealing with the threat of pirates who came to exploit the wealth that was created in the region through increased commerce. The popularity of the wine from the Canarian region during the 17th century even led to mention by Shakespeare of this product, on more than one occasion.

The city is close to the Teide Observatory, a centre of astrophysics which is one of the three important global space observatories and the largest solar observatory in Europe, drawing many specialists to the region for this reason. Puerto embraces modern tourism, having a subtropical climate with beaches of volcanic sand. Its hillside viewpoints are known for giving spectacular panoramic views of the Atlantic coast and elevations towards the Teide National Park.

The nearby cliffs host a number of typical Canarian botanical species and there are some pine and eucalyptus plantations on the hillside slopes.

As well as having an interesting history there are established tourist venues together with events that attract visitors. Puerto de la Cruz has a vibrant local community, the portside residents being known known as 'ranilleros', and hosts festivals during the year where the locality comes alive and the streets are filled with townspeople and tourists alike.

The first peoples known to have settled the Canarian islands were the Guanches who were thought to have heritage from North African, specifically Berber communities, and believed to have arrived around 6000 BC. The islands were visited by other peoples over the centuries notably the Numidians, Phoenicians, Cathaginians and the Romans who were thought to have traded with the inhabitants. Original settlement was believed to have led to the extinction of some native species, particularly a species of giant rat and a giant lizard, remains of which are found throughout the region.

The Guanches are thought to have believed in a magic and spiritual world with worship of several gods including a supreme god and creator 'Achaman', a god of the Sun or 'Majec' and a goddess mother, 'Chaxiraxi'. Examples of embalmed remains of this civilisation have been discovered which display preservation methods which are like those used in Ancient Egypt, as well as other archaeological remains, samples of which can be found in the Archaeological Museum of Puerto de la Cruz.

Spanish conquest in the fifteenth and sixteenth centuries changed the dynamic of the islands and the two cultures began to merge. Some adverse health events at that time also led to a reduction of the native male population. Under Spanish influence, the town began to thrive as a port, principally as part of the nearby town of La Orotava, until the building of a church and town square in the early 17th century led to further separate development and recognition as a point of settlement.

The import and export of sugar was followed by wine sales and a treaty with the British allowed further expansion of trade. Shakespeare is known to have mentioned Canarian wine several times in his plays. Notably in Twelfth Night Act I, scene III Sir Andrew Aguecheek is asked by Sir Toby Belch 'Oh Knight, thou lackest a cup of canary? When did I see thee so put down?' and from the Merry Wives of Windsor Act III, scene II the host declares 'Farewell my hearts. I will to my honest knight Falstaff and drink canary with him'.

Piracy in the region led to the need for further fortification at various locations and more development resulted from the appointment of a mayor and local administration in the mid 17th century. A volcanic eruption in the early 18th century which destroyed another port led to the increased shipping to Puerto de la Cruz and along with the city of Santa Cruz there was much use of the available dock facilities.

Further centralisation around the Santa Cruz ports and other conditions prevailing led to a slower local economy at first in the 19th century until an increase in agricultural sales, notably banana crops, and the development of tourism created new openings for the economy, the earlier tourists being drawn to the beneficial climate and an interest in botany. Puerto became a Spanish tourist destination for Europeans during the late 19th Century when a sanatorium was created as a health and wellness center.

In the 20th century the development of an island airport as well as construction for tourism from the 1960s onwards to the 21st century, established Puerto de la Cruz as a modern tourist resort, while still keeping many strong examples of Canarian tradition. 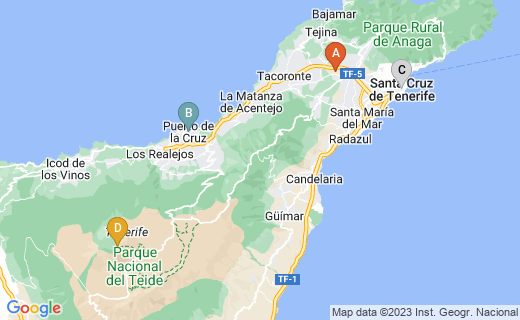 Which is your favourite part of a holiday destination?

Things to See and Do in Puerto de la Cruz

There are several events held in the town and the town has visitor attractions which draw many tourists each year. 'El Carnivale' is organized each year around the time of Ash Wednesday. Just before is a local 'Sardine festival' where a large sardine sculpture is paraded through the town before a ceremonial burial during the week of the carnival. In the main 'Carnevale', there are a number of floats and local participants join the parade in costume with much music and dancing accompanying. A few of the participants try to be more outrageous in a humorous way, much to the delight of the parade's audience. It is a colorful experience to view the festivities with the friendly crowd, not least because of their sense of community.

In July there is a water festival, 'El Embarcacion de la Virgen Carmen', where much water is thrown about.

A place where the public like to gather is the portside where there are more cafes and restaurants, picturesque fishing boats and food stalls. At certain times of the year the fiestas and tourism will increase footfall here as well as travelling entertainment such as an occasional circus or fairground.

The town has restaurants, cafes and retail outlets for consumer shopping and browsing. There are also bars and music in the evening.

The Puerto de la Cruz archaeological museum houses many significant historical artifacts. Loro Parque, is a large themed animal and plant reserve on the outskirts of the town with some large exotic animal and marine species. The Botanical Gardens house local and subtropical species. There is also an English styled garden at Sitio Litre as well as the water gardens alongside Hotel Tauro which are a haven for plants and insects such as butterflies.

For sunbathing on the coast, the Lago Martianez is a reserve separated from the town by enclosure with a 'pay on entry' system. Visitors can enjoy the cool ambiance of constructed pools amid palm trees and bars while sunbathing, with the Atlantic waves going over the rocks between the complex and the sea. The public beach Playa Jardin highlights the grey black volcanic sand with similar colored pebbles and stones at the edges, the area attracting the occasional busker or street artist near its promenades.

The Mount Teide National Park is a unique location and a Unesco World Heritage Site comprising a nature reserve around Mount Teide, an active volcano in the north central part of Tenerife. In this area the Teide observatory is found which has the largest solar telescope in Europe as well as being one of the largest space observatories in the world. Visitors can attend subject to prevailing conditions and available tours to the observatory.

Santa Cruz de Tenerife is a city and capital of the region which hosts a large carnival just before the lenten period which is so popular, it is televised and watched throughout the island. The city of La Oratava has many architectural sights including Spanish colonial styled architecture.

There are a number of popular resorts along the coast of Tenerife including the destinations of Coast Adeje and Los Cristianos in the South and Los Gigantes in the west.