A Quick Guide to Visiting Syracuse

Syracuse, or Siracusa to the Italians, is a coastal city and capital of the commune of Siracusa in southeastern Sicily, by the Iblei mountains. The City has just over 122,000 inhabitants known as Siracusans or Siracusani and consists of older historical areas by modern localities with a bustling, lively community. Located along a rocky coast, its natural promontories give spectacular views. Historically, the geology of the region gave Syracuse a strong position and led to the development and use of its ports, particularly due to the natural enclosure of the Great Harbor, allowing a landing point for boats and ships throughout the centuries. As a result the area has been an important point for trade at various times. It is known for its significant historical roots, including Greek, Roman and later Spanish settlement, examples of which can be seen throughout the city. It is also a popular tourist destination as well as a UNESCO world heritage site together with the nearby Necropolis of Pantalica.

Syracuse is said to be founded around 734BC by the semi mythological Archais who arrived with his compatriots from Ancient Greece. The city developed on some marshland and rocky areas and it was thought that the native Sicilians were not hostile to their presence. Ancient remains including temples are found on the island of Ortygia, the ancient heart of the city, located by the ports. The city developed as part of ancient Greece and at one time Syracuse was said to equal Athens in power.

Throughout the hilly areas which the city occupies are caves, such as the renowned Ear of Dionysius and the quarries or Latomie which date back many years. Further signs of settlement exist today including the remnants of Greek and Roman amphitheatres. The Roman and Greek influence is strong and the Roman politician and lawyer, Cicero commented on the city saying it was 'the most beautiful' of Greek cities at the time. The great Greek mathematician and scientist, Archimedes, was from this city. Many interesting people came to the city over the centuries including the Apostle Paul who, according to the bible, preached there. In a region which has experienced seismicity over the centuries, there are also signs of Spanish baroque architecture, notably the Cathedral of Syracuse, some of which was developed following an earthquake. The Christian influence over the city dates back to early communities and continued for many centuries, apparent from its catacombs and churches to the 20th century shrine of the Madonna delle Lacrime.

To this day Syracuse is an attractive and interesting destination both for its history, architecture as well as many hotels, restaurants and cafes. In an active Sicilian city it is a chance for tourists to feel they are a part of the community and to enjoy the memorable and stunning views over the coastal landscape.

Things to See and Do in Syracuse

Syracuse benefits from a variety of accommodation for tourists both by the shoreline and within the city. As a thriving community there are a number of cafes and restaurants. The local Siracusani enjoy sitting in the sunshine during the daytime when not working and talking with each other. Many of the hotels cater for international tourists and there are people there who speak good English. It is a good idea to prepare a few key Italian phrases in advance of travel by using a phrase book or Italian language app which should lay the groundwork for many great conversations!

The Latomie dei Cappuccini, found in the north of the town is one of several Latomie or ancient quarries found throughout the city. This area located by a Cappuchin monastery is said to the largest and deepest. It consists of paths and caves carved out of rock and is said to date back to the 6th century BC. It has a history as a prison, then as both a pagan and christian burial site and place of worship. The name Latomie derives from the Greek 'latomiai' meaning carved stone which refers to the quarrying of materials used to build the city of Syracuse.

The Ear of Dionysius is another cave said to be shaped like the human ear in a scaled up form. It has enhanced acoustics which were said to be used by Dionysius the Tyrant of Syracuse to spy on his enemies. It was also used as a prison in Greek/Roman times.

The Greek theatre had one of the largest seating areas in the ancient Greek world and was developed further in Roman times. It has the classical semicircular shape and sometimes performances are still held there. The Roman amphitheatre not far away survives as the foundations and remnants of a large arena with the remains of places where the gladiators entered and some pits and tunnels under the arena still visible. The nearby Paolo Orsi Archaeological Museum has artefacts to view within a park setting.

The modern shrine of the Madonna delle Lacrime dominates the skyline of Syracuse. It is dedicated to a miracle which occurred in the 20th century. A religious image of the mother of Jesus, which hung on a wall in the room of a severely ill lady, began to weep tears for a while until it stopped. The recovery of the lady and subsequent miracles of others led to involvement by the Church in Rome. The holy image is displayed in the church to which there are pilgrimages and where masses are held.

The remains of San Giovanni church, crypt and extensive catacombs date back to very early Christian times. The church is thought to be a Roman sepulchre originally. It is possible to visit underground though the contents have long since been removed. For safety reasons only a portion is visitable. Still, for its age it remains impressive. The church is largely a ruin due to a strong earthquake in the 17th century but arches, columns and stone frames survive and it is an interesting historic structure.

The island of Ortygia is a place where many communities have resided over the centuries and an ancient foundation of Syracuse. At the foot of a promontory it has many beautiful and ancient sights, not least the Cathedral rebuilt in the classic Sicilian baroque style in the 17th century where remnants of a temple are found in the columns of the church. The church of Saint Lucy, the patron saint of the city is found nearby. The temple of Apollo is found in front of the public square on entry to the island. There is also a popular busy public market at certain times by this location. Previously the island was heavily fortified until some walls were removed at the entrance and modernisation took place in the later part of the 19th century to provide better access.

For those looking for retail therapy there are many shops throughout the island and into the main town including niche stores, main brand boutiques and local retailers. Seafood is served in a number of restaurants and the cafes are often a bustling hub. There are sun terraces attached to some venues and some buildings offer rooftop terraces for their guests. The sunsets are renowned for being spectacular though the panoramic views are great at any time of the day. 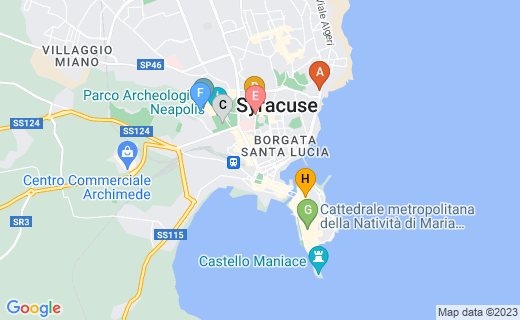 What attracts you most to a destination?

How to get to Syracuse and Things to See Nearby

There are airports serving the south east of Sicily at Comiso, near Ragusa and Catania Fontanarossa by Catania.

A number of car hire companies operate in Sicily and it is possible to hire a car from the airports and drive to Syracuse. It is a good idea to plan and book in advance. There are also buses and shuttles between Comiso, Ragusa and Syracuse and trains between Ragusa and Syracuse. From Catania airport there is a direct bus service to Syracuse or a train service from Catania city centre. Taxis are also possible and the increased cost can be shared if there are two or more of you.

There are beaches to the south of the city, notably the white beaches by Fontane Bianche and further away, there are seaside towns including those at Marina di Ragusa. Not far away in the region and towards Ragusa are some beautiful baroque towns such as Noto and Modica which are worth visiting. Modica is also famous for its chocolate.