A Rough Guide to Bergamo in Italy : A Short Break in a Medieval Town

A Rough Guide to Bergamo : A Short Break in a Medieval Town

If you're ever considering a short weekend break somewhere in Europe then I have a strong recommendation.

The historic old town of Bergamo in Northern Italy.

It's perfect location for a romantic weekend with wonderful architecture surrounded by beautiful countryside. Plus it has all the best in food and drink that Italy has to offer.

Bergamo is truly a charming town situated on top of a hill with marvelous views over the Lombardy countryside. It's the perfect place for a summer stay or even just a short day-trip to sample its many delights. 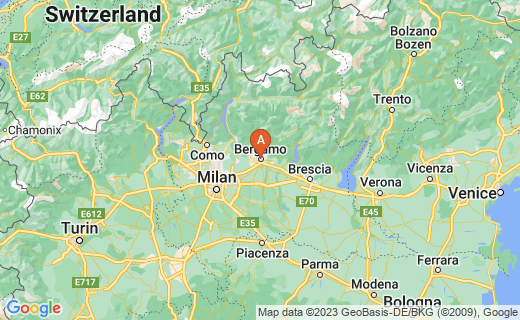 Arriving at the train station

It was my last couple of days in Italy and I was travelling to the town of Bergamo. I had a flight from the local airport on the Friday morning back to Prestwick in Scotland. So after spending the afternoon in Milan I headed off for the train station and luckily when I got there a train was leaving in only ten minutes.

After an hours travel on the train I came into Bergamo. Despite the signs saying not to cross the rails, about two dozen folk scampered over the lines to the platform on the other side. Just as they did a huge train was slowly arriving causing the driver to blast his horn to tell them to get the blazes off his railway.

A first impression of Bergamo at the train station can be a little unfavourable as there were a few people begging for money around the platform. A couple of them had dogs with them and obviously the local police weren't really doing much to remove them.

The station itself is small and unimpressive and the gents toilet is not particularly luxurious either. But time for some good food I thought as I bought a hot, tasty kebab from a stall next to the station. Washed it down with a bottle of cold peach-flavoured tea made the perfect early evening meal.

A woman walked past speaking into a mobile phone with a huge bandage wrapped around her right pinky finger. Why does that look so amusing? I think it's the work of bored doctors who want to take the rise out of their unfortunate patients. Break a finger and you have to walk around for weeks with that huge protrusion sticking out in the air removing any dignity you think you might have.

Checking into the hostel

I hadn't booked accommodation as my arrangements had been all last minute so I had just decided to wing it and take my chances. As it turned out in the nearby Tourist Office a helpful lady phoned a hostel nearby and informed me that there was a bed in a shared room for the night so I walked round and checked in.

It was €25 and I had the 6-bed room to myself for a while so I lay back and relaxed after washing my well-traveled socks. Get the necessities done first and then a hot shower to freshen up. The hostel itself was very pleasant, well kept with friendly staff who spoke good English.

I was later joined by two Arab guys and two young Italians. The Arabs after a little while put a towel on the floor and I thought for a second that I had trailed wet footprints from the shower.

Of course not, as you modern sophisticates out there will have guessed they were preparing to pray to Mecca, something I've never seen up close before so I couldn't resist looking up to have a peek at this strange ritual.

It involved lots of muttering, rubbing ears and getting up and down repeatedly on the knees saying "Allah" a lot. Fascinating to watch I must say. I was worried that they might think it rude of me to stare but I couldn't help being interested in their religious devotion.

Not long after one of them offered me a tasty sweet which I gladly accepted so I guess everything was fine.

I went for a walk up the steep hill into the historic part of Bergamo or 'la Citta Alta' as it's called in Italian. Of course there are easier ways of reaching it as the local bus service takes you there from the train station. But more remarkable is the two small 'Funicular' rail systems, begun in 1887 but since modernised.

Beginning down in the Viale Vittorio Emanuele it takes you up into the heart of the old town. The slope is steep and the gradient reaches a ratio of 1 in 2 leaving you feeling like you're clinging to the hillside. The local folk christened it the 'Lift to Paradise' and it is well named

It carries you past colourful flower and vegetable gardens on the way up then I spent a marvelous few hours strolling around the little streets and enjoying the views.

At the back were the hills and valleys stretching into the distance while at the front entrance the old town gazed down at the more modern lower town. Construction of the lower town or 'la Citta Bassa' began after the end of the 12th century as the old town expanded over the city walls.

The name Bergamo actually derives from the Celts, believe it or not, when they occupied the settlement in 550 B.C. It is based on the two words 'Berg' (mountain) and 'Hem' (home), almost identical to modern German.

I would say that if you ever plan a long weekend away in Italy, or are even passing through, I would definitely recommend the old medieval part of Bergamo. If you live in Europe it's easily reached by budget flights to the local airport.

The most predominant is Ryanair which has low-cost flights from airports all over Europe but there are 12 airlines in total including Alitalia, Wizzair and TUIfly.

I walked along the north side of the old part of the town past the occasional jogger training for the upcoming half-marathon. Then came the St Augustine Complex with its pleasant park and the 13th century church with its gothic facade and Castegneta sandstone. The view here was impressive as I could see down the nearby valley with its colourful buildings and picturesque hills stretching into the distance.

Walking into the heart of town the streets were quietly alive without being too busy as locals and tourists strolled around in the late afternoon. I stood in the Piazza Vecchia admiring the marble palace building that serves as the Town Hall.

But it also contains the Angelo Maj Library which was founded in 1764. This famous collection has accumulated over half a million volumes in 250 years including a 1402 copy of Dante's Divine Comedy.

In the centre of the square lay the Contarini Fountain and over to the side diners and wine-lovers relaxed at the attractive 'Colleoni & Dell'Angelo' restaurant.

I then took a walk under the sculpted arches of the loggia of the 'Palace of Reason' dating from the 12th century and characterised by a central window with balcony which is topped by the St Mark Lion, symbol of Venice. Medieval Bergamo has wonderful old buildings full of romantic streets and alleys.

There are many charming cafes, bars and restaurants and walking about around 7pm I could hear the hum of conversation, the clinking of cutlery on plate and the occasional little bell signalling the waiting staff to collect a fresh dish from the kitchen.

There is an Italian saying that says "towns are made for people, to be lived by them" and I fully understood that sentiment as I soaked up the sights and sounds of this enchanting town. I even passed a small but cosy looking Irish bar called 'The Tucans' which was fairly busy with locals enjoying a pint of Guinness or perhaps a fine Irish whiskey.

In the heart of old Bergamo lies the remarkable 'Colleoni Chapel' built in the 1470's and dedicated to John the Baptist. A Renaissance building it has an ornamental facade full of bas-reliefs and sculptures and neatly complements the adjacent beauty of the 'Basilica Santa Maria Maggiore'.

Also worth a look is the visually splendid 'Medolago Palace' built in 1783. It has impressive Ionic columns framing five bas-relief medallion portraits by the sculptor Benzoni and dedicated to the 16th century poet Torquato Tasso.

At the pinnacle of the old town is the fortress, 'The Mastio', dating from the 1300's and which offers a spectacular 360 degree view over the valley and the land towards Milan and Treviglio.

Back to the lower town

I headed back down to the modern part of the town and came to the ramparts of the Venetian Walls that surround the old town. They were completed in 1588 by the rulers of Venice and considered necessary since Bergamo was an outpost on the western fringes of the Venetian Republic.

As I approached I thought I saw someone flying though the air. After rubbing my eyes and peering into the gloom of the early evening darkness I saw another airborne spectre floating past. However I wasn't seeing ghosts as it was only a group of kids taking turns on a zip-slide from the high wall and over the park below.

Down in the lower town I chanced upon another Irish bar called 'The Ritual' without even knowing that this particular day was the birthday of Arthur Guinness. So there were celebrations going on all over the world. I had a few glasses of the Irish black gold and watched a special concert on the pub's big screen.

I enjoyed watching The Undertones playing 'Teenage Kicks' even without Feargal Sharkey on vocals and then Scots singer Paolo Nutini who perhaps unsurprisingly is quite popular in Italy. Suitably refreshed I decided to grab myself my last pizza on Italian soil from a nearby takeway and retire to the hostel for a relaxing sleep.

This was interrupted by a couple of the guys leaving at 5am so when I got up at around 8am I was well and truly beat. So that was almost that. I said 'hello' to a new Belgian room-mate who was over to see a cycling competition taking place in Switzerland. He explained that it was actually cheaper to fly to North Italy and then travel overland to the race venue.

After getting ready I had breakfast downstairs, placing my 'pane' bread and individual jam on a table and then went back to the serving table for a glass of water to freshen my mouth.

When I returned to my table a woman had sat next to my chair so I smiled politely and sat down before getting back up to fetched a knife for my jam. Turning back to my table I saw that she had changed tables. So my old charm still has the same effect I see.

Back up in the room I packed my stuff, handed in the key and thanked the receptionist before walking down to catch the airport bus. Looking around I didn't feel like I wanted to leave as I love this country but good things come to an end as they say and I suppose I was looking forward to going home again.

One last look at the magnificent sight of old Bergamo high upon the hill and I was off to catch Ryanair FR743 to Prestwick at 11.40am.

The walls of the medieval town at night