Things to do in Courmayeur Ski Resort.

It was only when I felt my ears slightly popping on the coach that I realised we were actually gaining in altitude.

An auditory event that normally happens during my travels in the air and even then it is a relatively rare occurrence.

I have never felt that sensation merely travelling on a bus on a seemingly flat expanse of road. But climbing gradually we indeed were to our planned destination of Courmayeur.

Despite its French sounding name Courmayeur is an Italian village albeit situated right on the border between the two countries. Therefore it offers a certain Franco-Italian hybrid experience with influences from both countries.

Nevertheless it is the Aosta Valley in Northern Italy. High above looms the mountain of Monte Bianco or Mont Blanc depending on which side of the border you live.

Irrespective of national allegiances and mother tongue it is the highest peak in Europe stretching upwards to 4,810 metres. This is measured as above sea level and when you consider that the village of Courmayeur itself is exactly 1,224 metres above the waves then it is no real surprise that the mountain seems smaller than it actually is. 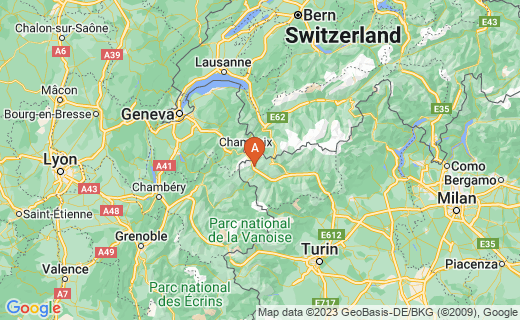 This misperception is more acute when you look up towards the ski-resort. What appears to perch on only a moderately high position in the mountains is actually over 1,500 metres above sea level. This is more than Ben Nevis which is the highest mountain in the UK.

However the latter is a three or four hour climb while the former is reached in only five minutes by cable car. A smoother and safer ascent but lacking in the exhilaration and sense of achievement in conquering that Scottish mountain.

On my visit I had forgone the opportunity to try my leg at skiing. I had never done it before and I did not want to hold back the experienced members in our coach party. It was early spring and no time to break in a greenhorn at the end of the season when the snow is ready to disappear.

Incidentally for the best budget deals it is perhaps best to book the resort in January as this is when it is more quiet after the Christmas and New Year busy period. It is never a cheap excursion to the slopes so if you want to save money then the beginning of each year could be the time to go.

The village of Courmayeur

The actual village of Courmayeur is a charming assemblage of old and new combining in an harmonic agreement of architecture. The buildings house souvenir shops dedicated to the winter sports as well as small off-piste fashion stores and eateries.

On a good day the sun floods the main street from late morning where coffee cups chink and sunglasses glint as visitors enjoy the local hospitality. A perfect opportunity to relax in the bright light and fresh air.

However my sporty friends trooped off to the slopes with blades slung over their shoulders like a multi-coloured assortment of infantry marching to some disputed frontier. Meanwhile I walked the short distance from the parking area to the village sometime in mid-morning.

The first thing to do in Courmayeur is to walk up to the viewpoint which overlooks the rooftops nearest to the roadside. It only takes a couple of minutes and you are rewarded by casting your eyes upwards to the wide-angled view of the foothills and mountain peaks. On the former you will see small figures skiing down the easier slopes.

Once you have taken in the view you can visit the nearby museum. It is dedicated to the history of the 'Alpinismo', the mountaineers and pioneers of the past. Inside there is lots of information on the walls with stories and biographies of the people who explored the mountains.

There are also plenty of artefacts and models to see including a mock up of a mountain hide and an old statue of the Virgin Mary. It was removed from the peak of Monte Chetif after being replaced by a new version which now looks down upon this largely Catholic nation.

There is also another museum to visit in Courmayeur called the 'Museo Transfrontaliero' described as a 'cross-border museum of Mont Blanc' and opened in 2005. It concentrates on the social and cultural heritage of the people of the Aosta Valley and Upper Savoy.

Unfortunately I could not wait for lunchtime, probably because I had skipped breakfast. This is never a good idea and my rumbling innards called for some nourishment. I settled on a little shop off the main street that sold freshly cooked chicken pieces.

A few roasted drumsticks took the hunger away and they tasted delicious eaten 'al fresco' out in the midly cold weather. They must have smelled delicious too as a local dog took an interest before being called away by its owner.

After the food a cappuccino was in order at a nearby cafe staffed by friendly assistants. There was an inviting array of pastries and sweet delicacies but I decided to forgo the pleasure.

I spent another hour wandering around admiring the modest but attractive architecture as well as indulging in some people-watching among the international gathering. Many different languages and accents could be heard as Courmayeur attracts people from all over Europe.

Then it was time for lunch which was only a cable car ride away.

Taking the cable into the air

The mid-air journey took about five minutes. A full sixty seconds or so was taken up at the far end where the car manouvered for position to dock. At the time of writing the cost was €8 for a one-way trip which is of course €16 return. I suddenly wished I had learned to ski then perhaps I could have made my own way back for free.

Eagles certainly would not dare up there if they had no wings and had to travel with human banality. I pondered whether the Irish airline Ryanair could possibly open a cable car business in competition offering budget-price travel under the wires.

But no doubt they would be stationed 50 miles from the actual destination.

That's a lot of high-wire even for their occasional circus act.

But before I could complete my entrepreneurial musings we had arrived at the station for the skiing.

The resort is situated behind a high ridge on the mountainside and is therefore out of sight from ground level. Stepping off the cable car you still cannot see anything. However once you walk around the side of the station you then enjoy a grand entrance to the high altitude proceedings.

It is a little like that moment when Richard Dreyfuss entered the mothership. A magical sight opens up to the eyes. Pristine clean sheets of gleaming white swarming with hundreds of people all twisting and turning as they slalom down the inclines.

In the foreground are pleasant chalet-type buildings offering hospitality and accommodation for holiday-makers and daytrippers. Their roofs are thick with deposits of snow appearing ready to avalanche off the sides.

Of course in the holiday business commercialism is never far away and there are advertisments and sponsored events taking place for the eager consumer.

At first glance it is a place where few seem to walk as many glide slowly past on skis or snowboards. Occasionally a perma-tanned instructor in uniform confidently passes by like a classic archetype of the winter vacation picture postcard.

Other people floated above as they passed overhead on the large chairs taking them up to the top with their skis dangling below them. It seems you can go higher and higher up these mountains without your feet ever touching the ground.

My friends and companions joined me for lunch after they had enjoyed an exhilirating morning risking life and limb on the 'black slopes' and trying to avoid the swirling rush of human traffic. A tinge of disappointment prevailed as the snow had been less than perfect.

Due to the late season and the sunny weather the white stuff was soft on top as it melted in the moderate temperatures. This made it more awkward to ski as the smooth, hard polish required was replaced by a difficult froth that slowed down speeds and increased the likelihood of falls. As if it was not awkward enough with plastic moonboots clamped onto six feet of fibre-glass.

Lunch at the Christiania restaurant was pleasant if a little cramped which was ironic considering the wide open space of the mountain expanses. I ventured beyond the typical Italian fare of pizza and pasta. But my choice of an exotic chicken curry was a disappointment as it was rather ordinary in taste and mild in effect with not even a vegetable in sight to add some richness and character.

The beer was good and as cold as you would expect served by cheerful staff working hard during the busy mid-day period. However one downside of the crowds was having to queue for 10 minutes at the one toilet on the upper level.

There was another one downstairs apparently but still rather inadequate facilities considering the size of the restaurant. More private seating capacity as opposed to public would be welcome. Otherwise yellow snow in a secluded spot would be no disgrace in an emergency.

A day at the beach

In the fine weather there is the option of eating outside to enjoy a delicious meal with a fine wine.

Alternatively a fruit juice for the responsible skier on the busy slopes.

It is a scene of clean, fresh mountain air exuding fitness and good health that is tarnished when the post-meal cigarettes are passed around.

The only clouds visible in a sparkling clear blue sky.

After the exertions of the downhil racing many people sat out and relaxed on deck-chairs. It was time to start enjoying the cool glow of the March sun. A low-temperature equivalent of a day at the beach with extra clothing.

Many folk simply lazed around in the afternoon light being tired out from the morning sports. Others perhaps recharging themselves for a last fling before the early sunset.

Hell mend the wandering absent-minded who block out the sunlight casting their shadow on the snow-bound sunseekers. They will soon be told the error of their ways.

The beach-side analogy is enhanced not only by the white sandlike appearance of the terrain peppered by deckchairs and sunglasses. If you close your eyes you can hear the soft and rhythmic swish of people cruising past on their skis sounding like gentle waves lapping on a seashore. You also have more of a feeling of the warmth of the sun on your face as the touch sense is focused.

As the shadows lengthened and the peaks became darker in silhouette it was time to descend.

The cable car is heavily laden and crammed with people as it departs.

The sun sets earlier in March and even earlier in the surroundings of Courmayer as it disappears behind the mountains.

Then the charm of the village at night is an attractive and romantic finale to the day.

The temperature drops quickly and the late afternoon gloom turns the brightness of white snow into a dull twilight grey.

But while the hills are still have that cold covering people will flock there each day until the skis are stored away till next winter. They are then quickly replaced by hiking boots which will mark their fresh summer prints on the uncovered ground.