Skiing Holidays in Italy: Things to Do in Valleve in the Brembana Valley.

The northern Alpine region of Italy is a fascinating part of the great peninsula of southern Europe.

The Brembana Valley is one such area and is full of attractions for visitors.

Both in summer and winter there is lots on offer for the sporting type, the outdoor set or simply for those who want to escape the hubbub of the urban jungle for a while.

There are several ski resorts on the upper reaches and tourist towns along the foothills and plains.

But there are also many little mountain jewels dotted around the rugged slopes and crags of the Brembana. One such place is the small but fascinating village of Valleve. 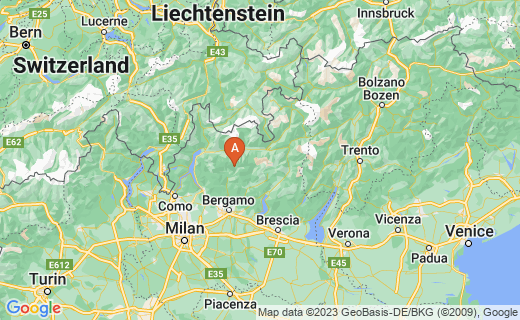 The first thing that you see coming from the south is the old church. A feature of every town and village in Italy this one is over 300 years old. Work began in 1695 although with subsequent renovations since then.

The south facing side of the bell tower sports a large sun-dial to give the time. The north side however sports a strange anachronism.

It has a modern clock that resembles the face of a giant wristwatch. No Roman numerals or medieval typescript on this public time piece.

There is plenty of space for your car in town as there is a large car park before you enter the village proper. So plnety of space available.

Next to the car park is a busy spot at weekends as there is a small football field for kids to play and for the not so young a little bowls court.

The sports and picnic area

The 'anziani' of the village engage in gentle, gladiatorial contest while others are happy to lean on the fence and watch the action. For younger children there is a fun playground to use up their energy.

Wooden tables provide a place to rest and relax or enjoy a picnic in the summer sun. Certainly at the weekend and in good weather families will gather here to mingle, chat and eat.

Alongside this area runs the river Brembo and an attractive, pedestrian bridge crosses over the flow. It seems like a wooden and covered 'bridge to nowhere' as it simply leads over to private property.

The rarely beaten, grass-covered path on the other side ends at a charming stone cottage which can only be admired from afar. Unless you are not afraid of some gentle trespassing.

The prominent buildings of Valleve are fairly modern looking but designed in a traditional style. Colourful apartment blocks with long, flower-strewn balconies don't spoil the natural surroundings of the mountain landscape. Huanity and nature mingle harmoniously.

The village lies in a pleasant valley of green fields and forests far up in the mountain area. But you can still look up to more rural delights as the peaks are higher-still. They continue to stretch up into the distance to the Northern Italian sky.

A pathway takes you along the riverside and within a couple of minutes you are in the older section of the village. The first historical mention of Valleve appeared on record in 1181.

But certainly there was a Roman presence before then although they weren't permanent settlers. The actual ancestors of the current crop of inhabitants lived a pastoral existence, tending their herds and cultivating their crops.

In the Middle Ages a small and local industrial economy centred around iron, copper and silver mining. A dangerous activity at the best of times and above ground there was the added hazard of avalanches in winter and the occasional outbreak of the dreaded smallpox.

The historic centre of the town

Leaving the riverside path you step onto narrow lanes where flagstones and rustic walls instantly take you back in time.

But old and new sit side by side as featured at the end of one of the wooden balconies. An outside toilet with a satellite disk attached.

Presumably the TV is not in there. But given the quality of most Italian broadcasting it wouldn't be out of place in this little palace of porcelain.

The whole area of the old part of Valleve is an open-air museum. A photogenic marvel for the holiday interloper. Wooden hand-carvings decorate the walls, artefacts of work and leisure hang above your head.

Murals add colour with depictions of country life and the iconography of religious imagery. On a more prosaic level the old public washing area is still there and still operational. The mountain water flows into the sinks under the shade of a small slate roof.

Even in summer the water can be freezing cold so it must have been hard on the hands come washing day. Life was much tougher in the old days before our modern luxuries made us soft and complacent.

Continuing back onto the path the surroundings are less pleasing but nonetheless interesting for a simple insight into country life.

We passed a ramshackle hen-hut whose inhabitants seemed interested in our sudden appearance. Perhaps they were expecting some tasty corn.

Across the water was an abandoned house which was a sad sight as it would surely deserve a restoration. Also along the way on our side it seemed bed-bases were the favoured raw material for home-made construction and improvisation.

Whether with springs or wooden straps these served a variety of uses as gates, fence parts or for whatever else they could be utilised. But this was a working area, actively used and with never a soft pander to the tourist trade.

Eating and drinking in Valleve

The end of the walk arrived at a small open workshop in a corner. Piles of cut wood lay stacked on top of each other under sheets of corrugated iron weighed down by pneumatic tyres. It could pass for a modern work of art in a city museum.

There is actually a small museum in Valleve where you can find out more about the village. Discover more about the history, the nature and the local traditions of the people.

We took the main road back down the hill but quickly ran out of pavement. We forgot to take some spare with us. It's always handy to carry some pavement with you in the countryside.

Below us we saw that much of the greenery is put to good use. There are thriving 'orti' which are working gardens and allotments for fruit and vegetable produce.

A couple of friendly dogs barked 'ciao' to us from down there with tails happily wagging. Perhaps encouraging us to come down and buy some home-grown produce.

Rather than risk the traffic on the road we went down the next set of stair to re-enter the village. We passed moss-covered areas soaked in thin layers of green vegetation.

Even in August the walls and steps seemed to suffer the damp conditions of their sun-starved position on the northern side of the buildings.

Coming full circle we came back down to the play areas and car park. Here a cup of coffee or a glass of wine or beer can be bought at the local Trattoria Afra.

Perhaps you may wish to stay for lunch or dinner and try the local polenta for which Brembana is well known. Or perhaps one of the many variety of cheeses that are produced in the area. Perfect with some fresh bread and a good red wine.

A winter wonderland for skiers

With an incongruously large hotel and the tall apartments you can guess that Valleve attracts a lot of visitors.

The peak times are unsurprisingly in the winter months when the snow arrives. After the first flakes arrive then soon behind them come the Alpine ski set ready for the slopes.

The village is not on the pistes itself but you won't have far to travel. The most popular ski resort is Foppollo which is just over 4km away by car. A little further up the mountains is San Simone which is 6km from Valleve.

This is the highest winter centre in the Brembana Valley and is therefore usually guaranteed snow throughout the cold season. Another facility is based near the town of Carona which is over 6km drive This is directly connected to Foppolo..

All of these ski resorts are part of the organisation called Bremboski. This group have developed and promoted the winter sports in the region.

San Simone is suitable for novices and learners as it has 6 red slopes as well as 3 black and 4 blue. There aren't many facilities however, so some visitors like to find hotels and apartments in nearby places.

Hence the development of Valleve and other villages and towns in the vicinity such as Branzi and Piazza Brembana.

But a great advantage of San Simone is that accommodation, shops and eateries are directly on the piste.

So no need to use the car once you are there. However the winding roads on the mountains are not for the faint-hearted, especially in hazardous conditions.

Carona is geared towards intermediate skiers but has some slopes for beginners. Of the 12 pistes 8 are red and 2 are blue with 2 black pistes for more expert skiers. As it is lower in the valley it can also offer 12 km of Cross Country trails.

But Foppolo is by far the biggest resort with high rise apartments, hotels and lots of facilities including the famous K2 restaurant. It has 18 pistes and offers more with its physical connection to Carona.

Although in the wilds the Brembana Valley is not far from civilisation as there are four Airports within two hours drive away. Therefore ski weekends, snowboard breaks and short ski holidays are all possible.

The nearest fly-in is at Orio Airport next to Bergamo which is only one hours drive away. Of course this is all dependent on the weather in Northern Italy and the road conditions.

As for Valleve itself it certainly offers a picturesque scene in winter. Heavy snow falls cover the terrain and transforms the landscape.

The lush green verdure of summer hibernates under the cold blanket of white in the dark months.

A romantic view can therefore be enjoyed from the balconies of those tall apartments and hotel windows. Perhaps an ideal retreat to enjoy the full atmosphere of a magical Christmas break.

Behind the windows and within the walls an open fire-place, seasonal tunes and mulled wine would add the finishing touches.