A Rough Guide to the Cinque Terre in Italy: Things to do in Vernazza

At first I thought that the train had come to an inadvertent stop.

But we were at Vernazza station. It was just that our carriage was in the tunnel. They have to really squeeze their train stations into the Cinque Terre towns and villages.

The hills of the high rocky coastline don't leave much space and Vernazza is actually a small village lodged between two of these hills.

Looking back at the parts of the train in view as they sat between the buildings they had that 'Toytown' appearance within the cramped confines. Its modern appearance looked incongruous amongst the historic surrounding.

It would be wonderful if the Italians used a traditional type of locomotive to blend in with the old-fashioned style of the Cinque Terre. As it once was after the opening of the line back in the 1870's.

Those were the days of steam and crafted design when the trains delivered milk and mail along the coastal line. A romantic whimsy for the casual visitor as perhaps the locals prefer the efficiency and reliability of the modern electrical engine. 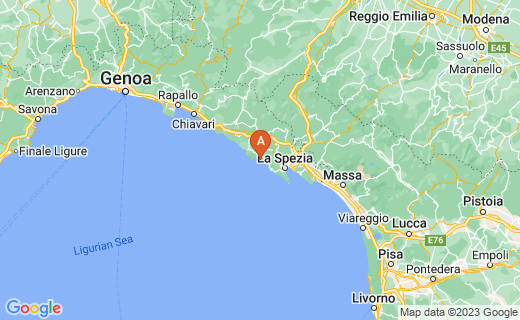 A step back in time

The sense of unreality continued as we strolled along the cobble-stones of Via Roma which is the main street leading out from the station. Wider at the start, it then narrows on the other side giving the appearance of a dead end. That is, until you inspect it closer and find it is indeed open at the other end.

It has all the texture and feeling of a closed set in a Hollywood movie and lends a quite beguiling feeling of place and time. It therefore provides a fantastic introduction to Vernazza and a wonderful atmosphere for your visit.

An added effect is the various paraphernalia lining the street such as small boats, barrels and fishing nets. I half expected Mario Lanza to burst out of a doorway and regale us with 'Sorrento' or hear Sophia Loren crying out "Peschi! Peschi!" as in an old Dino Risi movie.

It was everything you would expect a period-piece movie to have imagined and realised as a classic seaside village in Italy. The typical and the stereotypical juxtaposed in complete harmony.

Except these were all authentic relics of yesteryear with no added accoutrements, no pastiche or theme-park artifice to convince the tourist this is a true heritage tour. Admittedly fishing no longer dominates the village as it once did and many of the artefacts are around for decoration rather than utility.

In fact the population has also decreased to under 1,000 people which is less than half the figure it was in the early to mid-20th century.

The village also had to undergo an enforced restoration and renewal after terrible floods in 2011 caused so much damage in the streets. Three people died and the inhabitants had to be evacuated as 4 metres of mud and debris poured down from the hills after torrential rains struck the Cinque Terre coastline. It cost over 100 million euros to repair the damage caused by the devastation.

Nevertheless, today a revitalised Vernazza is all natural, full of the charm and ambience of a genuine Italian village which has been around since the 11th century. No surprise that the name derives from 'verna' the Latin word for 'native'.

The absence of cars enhances that comfortable old world feeling that persists in this modern day.

Especially if you leave the main street and wander off the beaten track.

There are many of the 'Caruggi' to explore as these old alleyways wind up, down and across the village.

The place has a quiet, traditional resonance as well as a strong character and presence.

But there is still a lively mixture of sight, sound and smells around the streets in high season without becoming too oppressive with crowds.

Vernazza has not suffered badly from the over-commercialisation associated with many popular resorts. In fact there are not many shops or places to buy souvenirs. So for holiday retail therapy don't rely on this village. Not that that is necessarily a bad thing as it has more diverting charms to offer.

Piazza Marconi and the harbour

Unless you want to dally around the streets and lanes then in a couple of minutes the main thoroughfare will lead you to Piazza Marconi and the harbour. This picturesque site is certainly worth lingering over.

There is a sheltered bay where we saw many people swimming in the warm waters of the Mediterranean. Meanwhile small boats cruised along the surface and the occasional ferry arrived at the harbour to disembark its cargo of locals and tourists.

The harbour-side of Piazza Marconi is ideal for relaxing and sunbathing as it has a spacious concrete area. This has an attractive curvature shape almost like a flat, two-dimensional amphitheatre for solar worship.

The primary building in the Piazza with the rustic charm is the 'Santa Margherita di Antiochia' church. It sits proudly at the water on the right-hand side of the square overlooking its flock. Every summer on the 20th July the locals celebrate the feast day of the saint with street banquets and fireworks.

But higher up, perched more than 325 metres above sea level, lies the 'Sanctuary of Our Lady of Reggio'. Dating from 1318, it is in an attractive area surrounded by trees and can be reached by a 2km walk on a path beginning at the train station.

On the other side of the Piazza diffident tourists took the leap from the rocks into the water below. However the local youngsters are easier to spot as their plunges are more spontaneous and carefree lacking the doubt or trepidation of the stranger.

Jumping into the cool waters is something the Vernazza kids have no doubt tried countless number of times with little degree of difficulty. A reminder in this modern technological world of how the simple amenities of nature can often provide the best amusement.

Above the water-sports is an eccentric assortment of cafes and homes implanted on top and within the rock layers. High-rise meals are available thanks to a precarious Lemony Snicket style of construction.

You can't fault the designers for their imagination in utilising to the greatest effect the resources offered by the terrain. Walls and stairways cling to the side of the sheer drop of the rockface challenging the least trace of vertigo.

Up there you will find the Belforte Restaurant which is named after the old military stronghold at the waters edge. The small tower above, which was built in the 11th century, had the duty to provide protection from the unwelcome visits of maurauding pirates.

Nevertheless an annual festival still takes place to remember those days of the ruthless privateers. The tower is part of the 'Castello del Doria' which was restored in the 20th century and houses a museum inside.

The sights and sounds of the summer

But not only beautiful and charming sights await you in Vernazza. There are many sounds and sensations to enrich that holiday experience. Unfortunately the slight roar of the regular trains rumbling past can be overpowering within the confines of the 'Case Torri' surrounding the station.

However from the comfort of Piazza Marconi they become a soft rumble in the near distance muffled by those self-same tenement buildings. The sound of the timetabled rhythm of the tracks is interspersed with the peal of church bells amidst the lapping of the waves.

And of course all around is the constant international babble of the summer clientele of this UNESCO heritage site. People come from all four corners of the world to visit places like the Cinque Terre and you will hear many accents and languages as you stroll around town.

Occasionally the external air-conditioning of passing pigeons briefly provides some cool air as their wings go flapping past. Perhaps they may be escaping some of the many domestic cats that hang around the bay area who can otherwise be found relaxing inside the little boats.

Something in the air

And of course everywhere are those distinctive smells of Italian cuisine. The waft of warm pizza and pasta mingles with the ever present aroma of espresso coffee. In the shops are fresh fruit and vegetables along with wonderful herbs and also a little piccante to spice up your household menu back home.

We stopped for a beer at the bayside trying to take shelter from the late afternoon sun. Parasols where aplenty but then so were patrons and a shaded space was at a premium. Nearby some local folk were enthusiastically competing at a handlebar football machine.

Eventide beside the waters

If you have time then Piazza Marconi is a perfect location for the evenings. You can people-watch to your hearts content or admire the traditional architecture. The colours and the shades of the weathered facades transform as the sun gently lowers itself under the western hill.

Colourful boats and local fisherfolk become silhouetted figures in the sparkling ripples of the waves.

Book yourself a table and have a meal for an unforgettable dining experience.

The food is excellent and varied and of course seafood is a speciality.

For the finishing touch wash it down with Limoncello or a glass of fine white wine from nearby vineyards.

The local wine has been described as "surprisingly bold-tasting" infused with a mixture of minerals from the soil and the salt of the fresh sea air.

Local wines are widely available throughout the Cinque Terre and you find them in virtually all the bars, cafes and restaurants.

Things to do around Vernazza

Elsewhere around Vernazza the land is dominated by the many olive groves which produce an excellent oil. You can also take hikes in the area and walk along the coastal paths of this National Park.

In only 90 minutes you could march on the 'sentiero' to Monterosso with the trail also beginning near the train station.

On the way you will enjoy fantastic coastal views in the summertime and also pass through the village of Corniglia.

Attractive beaches and coves lie at the seaside with the distinctive morphology of the terraced fields above. The old mule trails of the Cinque Terre will also lead you through extensive woodlands of pine and quiet groves where chestnuts, olives and grapes grow in the sun.

Because of its small size and the restrictions of space you won't find hotels in Vernazza. Accommodation in general will be limited but there are guest houses, apartment rentals and the small 'Boutique hotels' which are characterised by their intimacy and style.

Some locals may offer to put you up for the night in their apartments for a fee. But don't expect them all to speak English even if they offer you a 'nice room' as their vocabulary may be limited to a gentle sales pitch. Otherwise there is plenty of accommodation in La Spezia which is only around 25km away.

Without a doubt there are many things to do in Vernazza and it is one of the most interesting and invigorating places on the Cinque Terre coastline. It has a vibrant and colourful village environment full of atmosphere and charm.

If you are on a platform-hopping tour along the railway line then make sure you allow plenty of time to explore and enjoy this fantastic place.