Nearly 30 years ago I had the privilege of being one of a group of three visitors invited to witness UFO activity on Pat McGuire's ranch east of Bosler, Wyoming. Bosler has a population of 8 people. East of Bosler has more antelope than people. That is where McGuire's high-country barley ranch (with some cattle) was located. This rancher had reported cattle multilations all during the 1970s. He had been interviewed by Professor Leo Sprinkle, a paranormal psychologist whose specialty was studying UFO abductees, at the University of Wyoming in Laramie. My former Graduate student, Greg Bean, worked as a reporter for the Casper Star Tribune. He suggested to me that he would arrange a visit to the McGuire ranch and bring along a photographer." Would I like to come along," he asked. "Sure," I said.

His front page article in the Sunday, June 29, 1980 issue of The Casper Star-Tribune deftly reports details of our late night observance of strange objects blinking in the sky and gyrating in impossible patterns up and down and sideways as though they were putting on a show for us at 3 am. The show lasted for perhaps 5 minutes or so. But what happened previous to this display of agility and speed and blinking colors was not reported as it might have been too unbelievable for newspaper readers.

We three arrived at this lonely ranch with all of McGuire's family constituting a population greater than the town of Bosler and with more antelope than humans to boot. We decided to set up our tents on a prairie ridge overlooking his trailer house, well and utility buildings so that we would have an unobstructed view.

We chatted with all of his children who had seen UFO's hovering right over their trailer house and small calves being lifted up into the spacecraft. Pat later explained that he thought that the ufolk (as he called them) wanted to examine cow organs for radioactive pollution caused by humans and their incessant testing of weapons. He asked us to stay put up there on the ridge line because you never know what you might see. Well we brewed some coffee and sat outside our tents and noticed a dust devil forming way out by Bosler. In the meantime odd gusts of wind played strange tunes as they whistled through our exterior tent poles. Weird clouds formed to the east resembling bearded human figures like something out of biblical times. These clouds hovered over us all afternoon.

The dust devil snaked its way slowly toward the McGuire ranch and finally came right up the prairie ridge to knock down one of our tents! We quickly set up the tent again to have gusts of wind play strange tunes with our tent poles. Again another dust devil formed way out by Bosler. It snaked its way toward us and came up the ridge to knock down our tent for the second time. We were getting mad. We set up the tent again and a third dust devil formed. This time all three iof us stood up and held on to the tent. The third dust devil snaked its way right up to us and lifted the three of us off our feet and we rolled down the other side of the ridge, rolling in canvas. We laughed out loud saying McGuire's UFOs are made of canvas!

I thought to myself if ufolk really exist they sure as hell have a sense of humor. We had some supper and continued talking with Pat until it became dark but nothing else happened until 3 am when a five-minute dance of multicolored UFOs took place. Pat insisted that they deliberately put on a show for us. Their gyrations were so quick and erratic that Richard, the photographer, could never quite get a focus on them.The next day we thanked the McGuires and returned to Laramie to my house for lunch. My wife Maura said that we all looked very strange and distant. She had never seen three people who quite behaved as we did as though we were from some other planet. It took us all afternoon to regain our composure from this visit to a strange, unearthly ranch. The remains of this ranch currently lay beyond a barbed wire enclosure with no trespassing signs.

Back in the 1980s, we visited Pat MGuire's ranch east of Bosler, Wyoming in the Laramie Plains. We experienced incredibly unusual happenings during our stay including three dust devils in a row that came up a prairie ridge above his ranch that flattened our tent. Greg and I both remember almost every minute of this time.

P.S. I might add that as I typed this article weird things happened that caused the computer to stop in its tracks in the middle of a number of sentences. It took me three times as long to type. 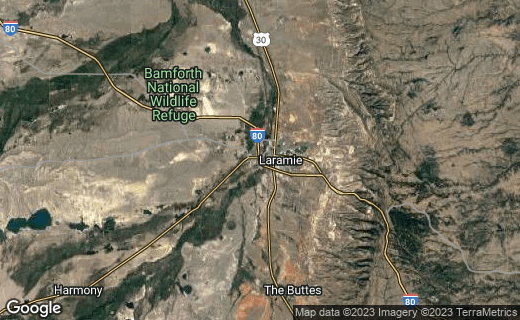