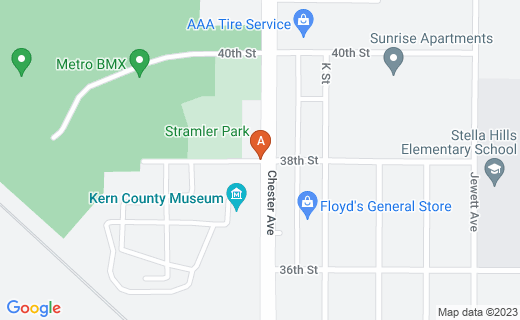 The Kern County Museum is just south of the Kern River on Chester Avenue in Bakersfield, CA.

If you ever find yourself driving through the city of Bakersfield - for whatever reason - you may wish to pay the Kern County Museum a visit. There is some great history to be found in this part of California and other tales of the pursuit of great riches. The Kern County museum highlights some of the struggles and accomplishments of the early settlers. You can walk around the Pioneer Village and see what the houses were like. See what they used for hospitals, stores and even jails. At times conditions may have been primitive but there were also structures which were quite palatial and modern. Even in the hot and dry conditions of California's Central Valley Desert, people flocked here to chase gold and oil. To seek a new life.

You can see some of their stories and walk back in time a century with a visit to the Kern County Museum.

A View of Bakersfield

Walk Back in Time

Trying to imagine what life was like in a Bakersfield summer in the 1800's - with no indoor plumbing or central air - is not a pleasant experience. The summer's here are atrocious and with no way to keep cool or to have access to a refreshing beverage must have been a trial, a real tribulation. However, home is where the heart is and life is what you make it. If you were willing to sacrifice a little comfort, you could have a pretty nice house that was actually comfortable: it could keep you cool in the summer and protect you in the winter. The pioneer village exhibits at this museum show you what some of the county's earlier architecture was like.

In addition, you can learn about the city's roots in the Oil industry. There are nice exhibits that talk about the science and geology behind the mineral deposits in the area which help make it one of the state's largest depositories. According to statistics provided by the museum two thirds of all of California's oil comes from Kern County and the wells in this location provide America with 10% of it's demand for petroleum. You will have the opportunity to see samples of what the early derricks looked like and there are many artifacts from the early 20th century that provide an authentic learning experience.

If you are a local looking for something not too expensive to do - either by yourself or with a family - you may want to consider a visit to the museum. There are fossils which are quite fascinating, artifacts from the many different ethnic groups that helped create Kern County and memorabilia from many of the country music legends that helped create the "Bakersfield" sound. There is even an exhibit that introduces you to how the acquisition of oil works and it's a bit of an experience that resembles an amusement park ride.

I'm not really here to market the venue. I'm wanting to write about my experiences and keep them in a place where I can come back and visit. I'm happy to share some of my observations and thoughts with you and perhaps even acquire some feedback. If you've been to the museum itself and want to offer any commentary, I am open to it. If you think I've spoken mistakenly about something, I welcome your criticism. Either way, I hope you enjoy what I have to say about something I discovered in my own back yard, that I felt worthy of writing about. What is your favorite place of leisure?

The influence of Oil

One of the things you might not know about Bakersfield if you are not from this area, is that the oil industry is very well established. The town is surrounded by pumps and wells. When you go into laundromats, you will see signs that read "No Oilfield Clothing!" There are places you can go about in the city and a dusty, tarry aroma permeates the air. At night some of the open fields resemble diminutive cities with small skyscrapers that reach into the air, lit by a thousand stars.

In 1903 a 300 mile long pipeline was built from the wells in Bakersfield to help supply San Francisco. At that time, the county was producing roughly 24 million barrels a year. You can read about the tar pits and see some of the fossils that were left behind. It's quite fascinating thinking that the Yokuts were familiar with the tarry substances that seeped out of the ground and used them to help seal their baskets. Try imagining small towns that developed from mining camps which popped up overnight. There were a lot of rowdy folks. Lawlessness sometimes abounded and many of the deeds - which were often disputed - were passed on by verbal agreements, handshakes. While there are still 10 major oil fields which help feed the appetites of most of the state and about ten percent of the nation, Bakersfield's oil fields are probably a locally kept secret. With that being said, there are more wells in Kern County, California than in any other county in the United States. One would think with such immediate access to a much sought after commodity - as well as the refineries to make the raw product useful - that the local residents would benefit from such a convenience. Well, not so.

Have You Been to Bakersfield?

The Age of Electricity

The pictures of the white house are below and actually quite exquisite. I think the tiny house craze was well along before our modern era and that people have been looking to recycle what would normally be discarded for many years. Whoever converted the old train parts into a house, did an excellent job. There were some additions to it, but if you look at the main structure, you can tell in fact that it was probably at one time pulled by a locomotive. My Impressions of the Haggard Place

Well I have to admit that when I heard the story, I actually expected a boxcar that was open on both ends and was close to being dilapidated. I'm a little envious in fact that they managed to create such a pristine looking residence and make it livable. From what I understand, they tried to keep it in the same condition - of course, after time, even gold looses its shine. As a tiny house advocate myself, I have to say to them Great Work! This is certainly something worth seeing. You cannot go into the house itself - of course, but most of the rooms are designed behind glass so you can get a genuine feel of what the accommodations were like.

And of course, since someone of Haggard's statue is associated with Bakersfield, it should give one a feeling of pride at seeing how humble his beginnings were. From what I gather, the man never lost touch with his roots and actually grew up in Oildale, which is just outside of Bakersfield. I have another hub on that town if you want to check it out. Growing up there probably would have been a hardship since that area has always been pretty rough.

Haggard had done a lot of things for Bakersfield such as helping restore the sign that used to act as the city gate, welcoming commuters to this town who were coming along Golden State Boulevard. See the yellow sign picture below. I've never been a big fan of country music, but my tastes are pretty eclectic. Before I heard the song he was most famous for, I would never have given him a second chance. One day it was playing on a jukebox and I thought to myself, wow, those are some great lyrics. I've included a link to the video below as well.

Do you enjoy Merle Haggard's Music

Well, I hope you enjoyed the article and the links I have provided. I hope I said some good things about the Kern County Museum. A lot of people have not so flattering things to say about California's Central Valley, but there is a lot to do here and there is a lot of history. Much of the nations resources - food, agriculture, oil - come from this region of California so it is definitely of economic importance to the nation.

It's amazing what you can discover in your own back yard and I'm glad I didn't decide to take a day trip to one of the more populous cities - such as Los Angeles or Fresno - and stayed here in Bakersfield. If you haven't been here and are planning a visit, you might wish to put the Kern County Museum on your itinerary. If you live here and haven't been, you might want to stop by and learn a few things about the city in which you live.

Bakersfield is a great town and I have a new respect for my community. I'm still relatively recent here, but I'm beginning to become accustomed to it. I had a great time today and learned quite a bit. There were other people here as well - of all ages - and it should have something for everyone. The cost of my ticket was 10 dollars but I believe they have deals and you might want to contact them. I've included a link to their website below and some more pictures from today.

Thank you, please take some time and answer my survey questions and if you have any comments, please leave them below.

Was this article helpful and informative?

Some More Photos of the Museum