A Visit to Wat Saket (Golden Mount) in Bangkok, Thailand

Bangkok is well known for its beautiful and magnificent temples known in Thai as ‘wat’. The Golden Mount or Wat Saket is one of the most suggested ‘wat’ destinations when exploring Thailand. The temple dates back to Ayutthaya era with the name Wat Sakae and was just later on changed to Wat Saket by King Rama I (Wikipedia).

During our most recent trip to Bangkok to spend time with family, the husband and I was able to escape some days for a few hours to explore some tourist destinations including Wat Saket. We were on our own and luckily, Wat Saket was not very hard to find. If you have included this temple in your Thailand itinerary, here are some things you can expect.

How to Go to Wat Saket

Our home in Bangkok was near the BTS Un Not Station so sightseeing was convenient for us having easy access to public transport like train, ordinary and air conditioned buses and cabs.

If you have cash to spare, the easiest way of going to the Golden Mount is through a cab. It will just drop you at the front gate. If you are near a khlong pier, take the Khlong Saen Saep Express boat up to the last port, the Phanfa Leelard Pier. The Golden Mount is just about 200 meters away, just a three minute walk. Express boats are affordable so I believe taking it from the first port up to the last stop will not even exceed 20 Baht. 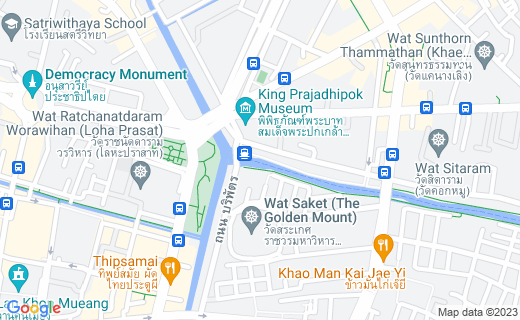 We preferred the adventure-filled and affordable way of going so we took bus #2 at the On Nut BTS Station bus stop and alighted at the bus stop of Wat Ratcha Natda Ram, Royal Pavillion Mahajetsadabadin. We only paid 6 Baht since we just took a regular bus. The minimum fare for air-conditioned buses is 15 Baht. There are several bus stops surrounding the temple so if you plan to take the bus, check the number of the buses that pass through your location and make sure it will drop you at a stop near the wat.

From our bus stop, we walked from Ratchadamnoen Khlang Road and crossed the bridge to Lan Luang Road. As soon as we reached the other side of the bridge, we took the small street to the right leading to Phanfa Bridge, went straight to Boripat Road then just walked straight following our GPS until we reached the back door of the Golden Mount compound. On a regular day, expect tourists, food stalls and tuktuk near the gate.

We went through the back gate and followed the road leading to the center. There were small Buddhist temples and bushy areas housing some which looked like graves and tomb stones.

We passed by a long open structure with benches covered with canopy. It was hot that afternoon so they were spraying water mist to cool the air. We sat a little bit to rest while observing some of the tourists in the other benches. Some are preparing to go make the tour while others looked like they are already done and just waiting to go to their next destination. The site was clean and healthy green despite the heaps of tourists. I remember passing by some cleaners along the way and there were garbage bins in key areas.

We went to the ticket booth and got two tickets worth 50 Baht each. Not that expensive but I know some great touristy places for less in Bangkok. The site is open daily from 8 AM to 7 PM.

I remember seeing a pet dog in a bag being carried by its owner so I guess pets are welcome here. I expected them to be strict with the dress code since we will be visiting a temple uphill hence me wearing jeans but I saw some tourists, males and females alike, wearing shorts and sleeveless tops.

The Hike to the Golden Mount

Right beside the ticket booth is a stone structure housing a golden Buddha with animal statues. Next to it is a set of steps leading up. It is decorated to the side with various types of golden statues, animals and mythical creatures with flowing water. The water mist is sprayed in the area added to its overall appeal making it look like a place of fantasy and the sound of the flowing water caused a blissful feeling of peace.

Though for me, the feeling of peace was short-lived as the steps leading up was swarming with local and international tourists. It would have been a different experience if we went on a less busy day. Again, the area beside the steps was noticeably green, filled with vines and towering trees.

There were hundreds of steps leading to the top - I didn’t count them though – and they were not that difficult to climb. Just awkwardly small for one step at a time and too big for two steps at a time. Before reaching the top, we passed through two levels of floors decorated with bells.

The visitors were ringing the bells for good luck. We’re not believers of luck but we didn’t see anything wrong with joining in the fun. We also took our time and took tons of photos. The third level already offered a great view of the city. We stayed for a bit to appreciate it then moved on to the next steps up.

At the fourth level, we reached a temple with an altar and golden and brass statues. The center of the temple has medium-sized steps on four different sides meeting in the middle and leading to another statue. In most "wats", reaching the main temple would mean taking off the shoes but this one was an exception. Some tourist, including us, were allowed to freely explore the area with our shoes on.

The Top of the Golden Mount

We followed the other tourists to a spiral staircase until we reached the rooftop, the final level cradling a huge golden bell-like structure. There were cauldron-shaped and soldier-like statues on its corners and it was surrounded by altars where believers may give their offerings. Almost everything is overwhelmingly in color gold. The area was decorated with flags and smaller bells creating sounds and tingling as the winds freely blew in various directions. There was a gong the tourists may sound and take photos with and seats where some tourists may rest their weary feet and bodies after a day of walking and site-seeing.

We stayed for a bit and enjoyed the magnificent view. We went in the afternoon and I was sure the view would be amazing at night. We didn’t have the time to wait for night time though so after about 20 minutes at the top, we started our descent circling back to the temple at the lower level. Then we were led to the staircase on the other side leading down.

The City of Vultures

The sculpture of dead humans being eaten by vultures in Wat Saket depicts a part of Thailand's history when the authorities are no longer able to manage the remains of their citizens who can't be cremated inside the city hence they were fed to vultures in a gruesome ceremony. Examples of these people are criminals, those who died of suicide and plague.

We passed by a huge tree with another smaller temple and sculptures of humans being eaten by vultures. This depicts one of the most popular and gruesome histories of Wat Saket and Thailand.

Our last stop was at a temple with a large golden Buddha and a huge gong with the flags of the ASEAN members. After freshening up at the restroom at the exit of the last temple we passed through, we then proceeded to the exit.

Our Wat Saket tour was memorable and pleasant. It was not hard to find, the compound was clean and well-maintained, the bells, gongs, sculptures and even the water mist contributed to its overall appeal. It was also very easy to climb the man-made hill and the view at the top was worth the effort. All these for a reasonable price of 50 Baht.