Blended into the charming landscape of Warner sits The New Hampshire Telephone Museum. It is nestled among the bricked-lined sidewalks in this bucolic village, proud of its history and heritage. There are three museums within the town center, another just a few miles up the road. The Telephone Museum is situated across the street from the local library; The Pillsbury Library [Named after the Pillsbury flour-giant. Learn more about this wonderful library’s here: http://www.warner.lib.nh.us/library-info/history-of-the-pillsbury-free-library/].

With only a few minutes to spare in my day, I decided to visit the Telephone Museum one afternoon. Although I am a self-described nerd and I enjoy spending time meandering my way through history, I was assured that my visit to this museum would be brief. How interesting can telephones be and how many could there possibly be on display?

When I opened the door and was cheerfully welcomed. I knew that I had completely underestimated this museum, its' contents and the importance of the stories these artifacts told. After I took a moment to glance at a few displays [to staid off my curiosity until my next time], I promised myself that I would return when I had more time for discovery.

Like many museums, the Telephone Museum offers a brief video introduction. The 10-minute program explains how one man’s passion would become a collection. Mr. Alderic "O" Violette worked in the telephone industry for years. His passion for telephones would not only serve to employ him but would expand over his lifetime and would ultimately aid in the creation of a museum.

After the video has ended, a staff member asks if you’d like a tour. Of course, you are welcomed to enjoy the museum on your own, but I highly recommend the personal tour.

The museum guide begins to tell the story of the telephone chronologically as we look at a wall of strange looking objects. The year is 1876, Alexander Graham Bell and Thomas Watson, represented in a painting, are busily working at a desk. After an introduction of these two famous inventors, you quickly realize that this tour is about to offer a far more insightful look into telecommunications and will unveil a far more interesting story than we ever learned in school.

At the spry ages of 29 and 22, respectively, Bell and Watson had already spent years devising, researching, experimenting and creating. Following the invention of the telephone, both men would continue their lives of creation and discovery in various fields. Placing the Call: Inside the New Hampshire Telephone Museum by george packard

Your trek through telegraphy stops briefly with a mention of a Mr. Elisha Gray. If you had all day to stay at the museum (which you may want to arrange), you could learn much more about this multi-dimensional character. Gray, like Bell, had been working on the telephone for quite awhile. Each man is credited with various leaps in discovery that many people may be unaware of, such as Bell’s contribution to flight and Gray's to the modern music synthesizer. Their paths collide during the late 1870’s when both men, having developed similar ideas for voice transmission, filed for patents.

Mystery, intrigue, conspiracy; those are only a few of the facets that make history so very compelling and who knew that all three could be found at a telephone museum? Well, the folks at the New Hampshire Telephone Museum do. Whose patent application arrived first and was properly filed at the US Patent Office was and remains highly disputed. Like a modern day 48 Hours episode, the mystery unfolds, deceptions uncovered, yet the truth remains aloof. According to popular history, Alexander Graham Bell was the true inventor of the telephone, but shrouded under piles of litigation papers, one must pause and reconsider that perhaps credit was given to the wrong individual or that the credit should be shared for the discovery of the telephone.

The Museum has a most impressive collection of artifacts that span from 1878 to 2013 [donations are always appreciated and apparently the museum staff would love to have a smart phone, a smart watch and a pair of Google glasses to add to their collection]. During the 1900’s-1930’s the candlestick phone evolved and is considered an enormous leap in progress. Prior to the candlestick, which could be held in one’s hand, people would need to speak directly into the phone’s transmitter which was attached to the phone and which was further mounted to the wall. The candlestick-style phone allowed people to be somewhat mobile; allowing them to stand away from the wall, sit or pass the phone to someone else. Today, the thought of immobility is neither imaginable or acceptable.

As we’ve learned thus far, the history of the telephone is filled with colorful characters, many of which contributed greatly to our modern way of living. That can certainly be said about Mr. Almon Strowger. Mr. Strowger was a rather quirky gentleman who lived in Kansas City in the late 1800’s. Much of what was known about Mr. Strowger has faded with the passage of time, however, his contribution to the telephone is one which should not be forgotten. Mr. Strowger was an undertaker. Upon learning that a rival’s wife, a newly hired switchboard operator, was directing all of Mr. Stowger’s customers to her husband, Almon Strowger took matters into his own hands. With a modest bit of know-how, several hat pins and a few magnets, Mr. Strowger discovered a way to telephone someone directly. No longer was the switchboard operator needed.

It would take some time before the rest of the country switched over to the new dial system [the technology would later be referred to as the Step-Switch. You’ll learn more about that during the museum tour].

To us, it seems so strange to consider the inability to speak with someone directly, but prior to Strowger's invention, one needed to speak with an operator first and then be redirected.

The Life of a Telephone Operator

During the 1950’s and 1960’s there was an explosion of different telephone designs, styles and colors. Prior to this period, the telephone was manufactured in black and Bakelite was used to form the phone. With the 50’s came the discovery of plastics. Technology was also developing quickly. Answering machines could be found in many homes and multi-line phones were the choice for bustling companies.

The smallest display at the New Hampshire Telephone Museum includes bulky bag phones, car phones and cell phones the size of bricks. Sure, Miami Vice may have been able to make those phones look cool, but to see them now and hold them in your hands only makes them seem ridiculous.

The reason for the petite scale of this exhibit is simple; as you stare down at the cell phones on the bottom shelf, you realize that it could be your first cell phone. The small flip phone that was once cutting-edge technology is already delegated to a museum shelf. While it may stun younger museum visitors to learn that the telephone was once a tool solely used for speech, today’s phones are ‘smarter’. We can text, share photos, play games, view our bank accounts, manage our hectic schedules, teach us to speak French and lower our home’s thermostat from hundreds of miles from.

1950-2000: Prior to plastics being used, the telephone was made from wood and metal. And while the telephone has become increasingly smaller, it’s capabilities have increased expontentially. At the Museum, you may not see the latest flex-phone from Japan or have an opportunity to try on a pair of Google’s smart-glasses (yet), but be assured that if the curators at the New Hampshire Telephone Museum can somehow get their hands on one or both, they will.

Understanding the history of the telephone would be incomplete without a detailed mention of switchboards and their dutiful operators. There is a working switchboard on display that helps visitors understand the mechanics of a step-switch and remienice about the party-line days. There is also an exhibit devoted to linemen-an impressive group.

Telecommunications is a vast topic. Its history, its science, its implications to the computer sciences and beyond. When I first sat down to write this article, I also mentioned the stories. Men invented the telephone. Individuals built the industry that lasted decades. People have stories and you will uncover many of them here at this museum.

One man clearly understood that our obsession for communication requires a retelling of many stories, fascinating ones at that!

How do I get there? 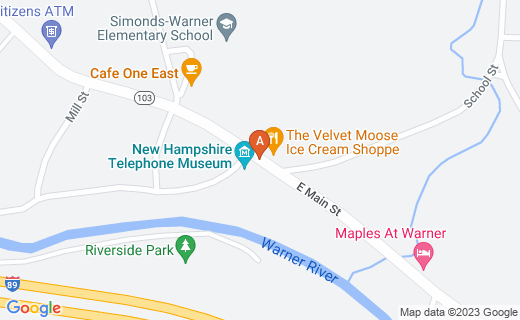 There are a few entrances to this museum, including a wheelchair entrance.

The museum hosts many events and programs throughout the year, including a program called the PHourth PHidays Series. Learn more by visiting the museum's websit

Have you been to the telephone museum?

Did you grow up using a dial telephone?

Breakfast, Lunch or Treats are Nearby

There are several local restaurants to choose from, including The Foothills of Warner, The Local, Charlie Macs, Pizza Chef and The Schoolhouse Cafe.

If you'd like your visit to the museum to end on a sweet note, stop by The Velvet Moose Ice Cream Shoppe

The New Hampshire Telephone Museum is an inexpensive facility to visit, making it great for families, seniors and groups.

The museum has ample parking located on Depot Street.

What do you remember about old telephones?