A Visit to Wat Arun, the Temple of the Dawn in Bangkok, Thailand

It is no secret that Bangkok and Thailand as a whole is bursting with stunning temples in different forms. One of the most famous and most visited temples in Bangkok is the magnificent Wat Arun. When searching online about Thailand’s popular tourist spots, it was almost always a part of the top 10 results. Unlike my previous solo tours around Bangkok, my most recent one was with the husband and there never would have been a more perfect time. If you’re planning to include Wat Arun in your next Thailand itinerary, read all about our touring experience so you will know what to expect.

How to Go to Wat Arun

Wat Arun is located along the Chao Phraya River. It can be reached by taking a ferry boat across the river from Tha Tien Pier near Wat Pho and Grand Palace. One of the easiest route is to travel via BTS Skytrain Silom Line from your location to BTS Saphan Taksin Station. You can then take a ferry to Tha Tien Pier and wait for a smaller ferry to take you across. 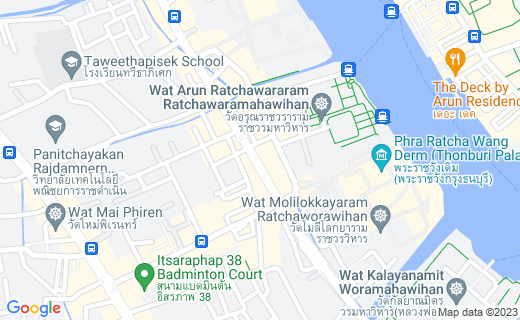 We took a bus from BTS Un Not Station to the bus station nearest the Grand Palace, taking our time to check out the historical sections of the palace walls because we wanted to visit Wat Arun in the late afternoon. From the Grand Palace, we walked around eight minutes passing by Wat Pho and a small market until we reached Tha Tien Port. We tried to check out some of the merchandise being sold in the market but decided to fall in line before the ferry even arrived because of the tourist influx. Prepare 3 to 5 Baht for the ferry ride to take your across.

Our ferry ride itself was uneventful. As expected, heaps of tourists were already taking photos of the wat from different angles. The sight of the wat basking in the afternoon sun was classically charming. I can’t help but be excited to finally see it in real life. Expect hundreds of tourists to join your sightseeing as the site is one of the most visited wats. According to research from Sciencedirect, the wat is visited by 5 million tourists per year. As we alighted the ferry, we walked through a series of wood planks then several steps of stairs leading to a medium-sized gate, tourists filling the way in both directions.

As soon as we entered the exterior gate, we were welcomed by a much smaller decorated temple surrounded by a deliberately designed flora. It was the Ordination Hall with two temple guardian figures in front. Definitely an eye candy, even the space surrounding Wat Arun was definitely well taken care of and picture-perfect.

The Wat Arun Fees and Must Haves

After taking tons of pictures, we followed the crowd and slowly moved towards the center where Wat Arun is situated surrounded by its own walls and gates. Visitors who were done with their tour were seen lounging in the grassy area outside of the inner walls. We toured in August and it was still hot despite some occasional rains as we experience the summer tail transitioning to the rainier and colder months. Water is a must have especially during a summer tour but make sure to properly dispose your bottles.

The dress code was not very strict when it came to the men and they were allowed to wear knee-length shorts but women strictly need to wear modest clothes; no shorts and no see-through and sleeveless tops. I was wearing shorts and came prepared with a wrap-around tube skirt with me, something I had bought along the road during one of our escapades in case something like this comes up during our tour. We paid 100 Baht for the entrance ticket per person. Wat Arun is open from 8:30 AM to 5:30 PM.

The History of Wat Arun

Just a piece of the temple’s history, Wat Arun or Wat Arun Ratchawararam Ratchawaramahawihan was named after Aruna, a Hindu god personified as the radiation of the rising sun. The temple was located at first in grounds of the Royal Palace until it was moved by Rama I to the other side of the river and went through a series of restoration under several rulers from early 1800’s up to the most recent undertaken from 2013 up to 2017.

Exploring Wat Arun, the Temple of the Dawn

The temple consists of the central tower and surrounded by four smaller ones on its corners. We toured in the late afternoon but it was still difficult to take some decent photos without some strangers being captured in it although some were polite enough to stop before they get included in the frame.

The main tower was decorated with bits of porcelain and seashells and the bottom sections were designed with animals and ancient Chinese soldier statues. There were center stairs leading up the main tower but the gates were closed after a few levels and the guards do not allow tourists on the other side of the enclosures. There were also gated Buddha statues on some sections of the tower.

We took as many photos and explored every bit of crevice of the public section of the wat. At around 15 minutes to six in the evening, the guards started leading the tourists out as the temple is about to close its internal enclosures at exactly six.

I was excited to see the temple in all its lighted glory. We waited at the grassy area at the front of the wat with the other tourists. The place was relaxing, the grounds landscaped and filled with well-kept flower beds. The country’s flags and a huge photo of King Maha Vajiralongkorn were also positioned at the front to welcome all visitors. I was enjoying the flower beds when the husband made me realize the temple lights were already lit up. I took my time and enjoyed a few more minutes taking in all its beauty. Wat Arun was gorgeous!

As we sailed back to the other side, I snapped a few more photos hoping I would be able to capture its grandeur even just a tiny bit. I was only using my phone so we all know how that turned out. As darkness slowly tried to swallow and engulf its wholeness, Wat Arun became even more stunning and highlighted with the night sky as its backdrop. And with that magnificent view, we closed our Wat Arun adventure.