Having traversed through the red mud earth and view points of it virtually, Matheran didn't give me a different look when I visited this hill station last month. But what drew my attention exclusively was its automobile free environment. No any motor vehicle is allowed to run in Matheran that ornate its old world charm making it pollution free. Hand pulled rikshaws and horses are the only means of transport available here with an exception of toy train.

Matheran meaning 'forest on the forehead of mountains' is a green landscape with different kinds of flora and fauna. It is in the vicinity of many major cities such as Mumbai, Pune.... for easy access as a weekend getaway.

Matheran is the only automobile-free hill station in Asia.

Matheran is a municipal council in Raigad district, Maharashtra state. This small hill station located in Western ghats is elevated at 800m above sea level. Motheran is declared to be an eco sensitive region by the Ministry of Environment and Forest, Govt. of India. A cooler and less humid climate makes it special during summer. The town is inhabited with monkeys among which Bonnet Macaques and Hanuman Langurs are also seen. One may come across British architecture of old style and Parsi bungalows in this forest on top, Matheran.

About the travel from Thane to reach Matheran

My husband planned this journey one day prior to embarking on it. It was a one hour journey from Thane local Railway Station to Neral that was a little crowded with Vada Pav shops, Mumbai's popular snack. Though our decision was to catch the toy train that runs from Neral to Matheran covering the forest swathes, we were disappointed. There was a long queue formed on the Railway platform and we had to turn back to go via roadway. Taxis were available to go up to Dasturi Naka from where we had to hire a horse or a rickshaw. It was a 20 minutes drive through the zigzag road built on top of the hills that gave us some refreshing views of vegetated hills and small waterfalls.

Dasturi Naka was calm and serene where plenty of horses stood for hire. Manually pulled carts also were available. Either you can hire them or walk on your feet to reach Matheran hill station. After some moments of thought, we decided to walk through the forest route enjoying the valley views. It was about 30 min walk that gave us an idea of how Matheran would look like. There was a stable situated near the Naka where hundreds of horses were tied to trees on one side. It was a lovely view to see so many horses bred in the dark, dense forests.

Monkeys were always moving and crossing our ways and it was an amazing walk through the red mud road stretched in the deep forest. Then came the whistling of the toy train that passed us through the track. The passengers inside the train were having a jolly ride singing and clapping.

To explore the points and village life of Matheran, we were told that walking the entire way to reach the view points was not an easy task. So we had to hire 3 horses to ride through the red mud roads for the 3 of us. My child was thrilled to have the horse ride, but I was hesitant as I don't like animal labor or slaughter. But I had to agree to sit on its saddle reluctantly for all others' pleasure. The horsemen educated us about Matheran's geography, history and village life during the short sojourn on horseback.

A generous view of the mountain cliffs is what awaits you in this point. A lake flowing down the base of these hills glorifies this point. It is said that this lake named Charlotte overflows during monsoon creating waterfalls here and there. We took a handful of scenic photos from this point that kindled our tour's delights in Matheran.

After covering some narrow lanes upwards, we reached Edward Point. There were smaller stalls set that sell drinks and snacks for the visitors. Drinking lemon juice, we watched the massive hills and plateaus that stood beside Edward Point.

A little ahead Edward Point, Echo Point became visible where loud sounds reverberate. This point also gives views similar to that of Edward Point. From here, we headed to the famous Louisa Point to see the other face of the mountains.

On the trail to this point, several monkeys caused hassles and after alighting here, the horsemen waved their stick to drive them away. A gentle breeze invited us herein the widespread Louisa Point that gave us an overall panorama of Matheran from all the four sides. Prabal Fort, built by Mughals was visible from here. A telescopic man showed us some other points such as lion's face, one tree hill etc. in this elegant, visually appealing Louisa Point.

As we returned, we had tea from the nearby stall run by a lady. What was special about this sweet tea was that she prepared it with a big alert for the monkeys!! She threw stones at them using a hand instrument to threaten them that would snatch her viands while making the tea.

We advanced to Sunset Point from there through the dense green forest on the tamed horseback. The horses didn't mess during the ride and were friendly. The kid was stroking it mildly to express his love. After sometime, we reached a narrow trail on the cliffs that was intimidating. Though there was stunning valley views on one side, I looked straight as I was sitting on horseback!!

The trail stopped in a large circle where so many tourists had come to watch sunset. We got out of the horses and watched sun hiding in the mountains spreading yellow light. That was the end of first day's outing in Matheran. We returned back to our resort with a refreshed mind to start the next day.

The next day's morning presented us the beautiful view of this lake, Charlotte. A small bridge crossing this lake arranged the platform for taking photographs. At the end of the bridge, a temple named Pisharnath Mandir is situated in a serene ambience. Charlotte lake provides the drinking water for Matheran residents.

After visiting this temple, we proceeded to Lord's Point that is located nearby. As we stepped down, monkeys came and blocked our way. One of them was showing its teeth as if ready to bite us. Someone threw a stone to frighten it away and we reached Lord's Point. A fog filled mountain face welcomed us in this point.

We were informed that there are a total of 28 points, 2 lakes and 2 parks to visit in this majestic hill station Matheran. A race course is also held here during May. In 2-3 days, all the view points can be explored that are scattered all over. Most of these offer lovely views of steep cliffs and streams.

Finally we returned back to the resort by noon and went for a stroll in the market in the evening. It had a wonderful display of handmade bags, leather goods, crafts and other products. The next day morning we left Matheran that delighted our dreams with its pleasant climate and vivid valley views.

I had the fortune to visit this hill station this year again. It was during monsoon when Matheran rises to its top form with all the greenery of the forests and with the white fog from the mountain. All the roadway from Neral was filled with spell-binding views from the rushing waterfalls and small pools formed beneath. It was a mix of green and white hues that were scattered everywhere as we walked our way from Dasturi Naka to Matheran.

Those who like to get wet while walking a long line enjoying lush greenery in dense forests can prefer to come here during monsoon.

It is said that post-monsoon is the best season to visit Matheran as the climate becomes favorable. September to November would be more appealing before the onset of winter. Winter nights are too cool and suitable for those who love chilly, cool weather. February to March is also the season when climate is pleasant without much coldness.

Toy train service in Matheran would be restored post-monsoon after the successful trial run conducted by Central Railway. A K Singh, Central Railway PRO said, "The trial run was conducted successfully despite incessant rain". The test was done on two engines with empty coaches from Aman Lodge to Matheran station and back. It was in May 2016 that the train service was suspended due to two derailments.

We stayed in this hotel in the year 2015 during our first visit to Matheran. The hotel had a set of villas encompassed within a swimming pool and garden. The villa could accommodate a small family with a sit out and a big hall. Our stay was comfortable in that nicely maintained, beautiful villa.

2. The restaurant was too good with tasty food.

1. Reception seemed to be careless with hardly any response.

2. No tea or coffee service directly to rooms.

We stayed in this hotel this year 2017 that is situated in the market with rain forests behind. The hotel has a decent look with balcony rooms, super deluxe, deluxe and suit. A neat swimming pool also recreates the guests.

1. Situated in the heart of Matheran

2. Washrooms are not up to the mark. 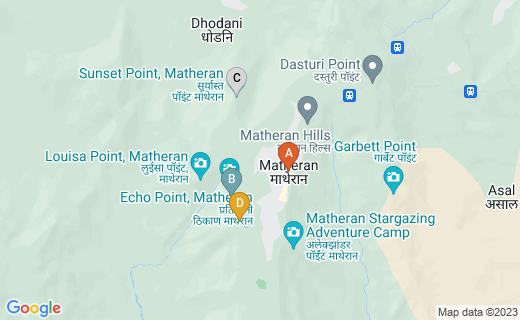