A visit to Panama

I recently spent a week in Panama visiting my son Alex who works in the Peace Corps. I flew first to Ft. Lauderdale Florida then to Panama City on Spirit Airlines from Detroit Michigan. The flight was about 6 hours total but I would not use Spirit Airlines again. They advertise “bare bones” airfare and I guess I got what I paid for. Pay for carry-on, pay for checked luggage, smaller than normal luggage size and weight allowances, pay for in-flight refreshments or even water, assigned seating that allowed 2 people per seat, crowded seating that didn’t recline, and red-eye flight times were some of the inconveniences that helped to provide a slightly less expensive flight.

Aside from the airline inconveniences the remainder of the trip went fairly well. We stayed in the airport Crowne Plaza hotel, since we arrived at 2:30 am. The next day we rented a 7- passenger SUV, a Toyota Land Rover diesel from Alamo rental car. I also rented a GPS unit, which turned out to be well worth the $48.00 fee. The reserved one week total fee was $387.00, but Alamo would not let me waive the $18/day liability insurance. In Panama city there are some toll roads. The rental car included a PanaPass which automatically, and conveniently, lifted the gates at the booths and charged my account. Alamo split the cost of those charges with me. The grand total for a week was $580.00 or there abouts. This was more than I expected and more than indicated on my reservation.

The first day we visited the Panama Canal museum at the Miraflores locks on the Pacific side. The three story museum was nice and had quite a few visitors for a Tuesday morning. It was not too terribly difficult driving there with the GPS, although the traffic was a little heavy and we did take a few wrong turns, but got back on track thanks to the GPS girl. The locks were unimpressive. I guess I expected some gigantic structural spectacle but they were not really all that much different than the Soo Locks in Michigan which I have visited many times. The Canal itself is a marvel, especially when you consider much of the work was done by hand. The locks and museum are something that one should visit, if even just to say that you saw them. If you drive a bit enough west from Panama City you will eventually cross the canal.

In the afternoon of the first day we headed back to the airport to pickup my son Dan who flew in from Korea. On the way we stopped at the fish market for Ceviche, a first for me. It is raw fish and other sea creatures cured in lime, lemon and other citrus juices with spices. I liked it. Once Dan joined us it was on the road for a 5 hour drive to Alex’s place in El Pilon, near Santiago, west of Panama City. It took a while to get out of Panama City during the 3 pm – 7pm rush hour period and although the traffic was heavy, the drivers were not terribly aggressive or rude like I experienced while driving in Paris.

We spent a day visiting families and friends in my son’s community, before driving to the resort area of Bocas del Toro in the northwest of Panama near the border to Costa Rica. It was a joy to see how well my son was accepted by the community and to see how fluent he had become using Spanish, of which he could not speak but a few words, a little more than a year ago. Visiting people took some time. In the U.S. when meeting new people, I have become accustomed to simple introductions and a short exchange of casual conversation before moving on. In Panama it seemed that you are expected to “sit a spell” and talk, perhaps enjoy a drink or snack offered by the host before moving on. Sometimes the visit would last an hour. Also it was more or less expected that your attire would be above casual, which meant long pants or jeans and a collared shirt for me.

Now I should perhaps mention the weather. I had been expecting that the heat would be unbearable. It was hot and humid but not intolerable. It was much like a very hot summer day in Michigan. It cooled some at night and I managed to sleep without suffering from the heat. My son rents one of the better houses in his village but it has no air conditioning and no hot water, in fact no water at all after 3 pm. The water is clean and drinkable. He does have the luxury of an indoor toilet and running water. The time of year was supposed to be the rainy season and a bit cooler because of that but El Nino was affecting the weather patterns and we saw little rain.

Our drive to Bocas del Toro took us west toward Davide, then north through the mountains to get to the Gulf coast. The highway west was torn up with construction for about 100 miles or so, and was fraught with trucks, gravel roads, orange barrels and pylons. The traffic was medium and passing was not too difficult. The drive through the mountains was beautiful but I could see where it might be treacherous if the truck traffic was heavy or the rains were persistent. Even with the light rains we could see evidence of mud and debris slides on the road that would perhaps cause some long delays during the normal rainy conditions. In our travel from Santiago and back we passed through a few police checkpoints, one where they asked to see passports and one where they asked for my driver’s license. The let us pass.

In the town of Almarante on the coast we found parking for $3.00 a day in a fenced locked lot and a boat to take us a few miles off shore to the not so clean little village of Bocas Town on Isla Colon. The difficult part of this excursion was trying to avoid the panhandlers that wanted to “help” then try to extort unreasonable sums of money for carrying your luggage but a few feet from the car to the boat. On the Island we had rooms at the Bocas del Toro Hotel for $100 per night. This was more than I expected but…. It was on the water and convenient. Meals were not exactly cheap either, unless you wanted to take your chances with street food. Some restaurants did not accept credit cards, but we had a nice meal and relaxed by the water after the long drive. 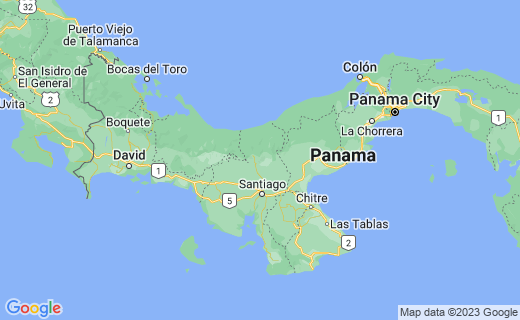 The next day we booked one of the excursions from the main island. We negotiated a non-standard trip to Cayo Zapatilla, a small island about 10 miles off shore, and part of a national park and sea turtle nesting area. The original tour included snorkeling and dolphin watching(or attempted dolphin watching) but we wanted to spend the entire time from 9:00 am to 3:00 pm on the island beach. The cost was $20 /person, and once we arrived the driver of the boat anchored off shore until we were ready to leave. The island was beautiful and the water was very salty but refreshing. The photos here are a better portrayal than my words can describe. 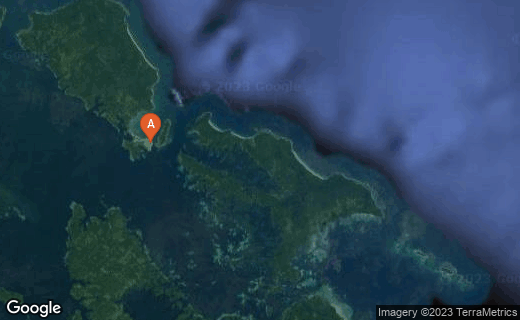 Cayo Zapatilla is in the very lower right corner

The next day it was the drive back to my sons community, followed by another day of visiting and a nice barbeque dinner and the ranch of a friend to my son. The next afternoon we drove back to Panama City, once again managing to hit the rush hour traffic, for a 2:00 am departure.