Tombstone - The Town That Was Too Tough to Die

A couple of hours drive south east of Tucson, Arizona is the old silver mining town of Tombstone. Best known for the gunfight at the OK Corral, Tombstone lives on despite the depletion of the mine. Instead of mining and cattle ranching, the town's economy now relies on tourists and the retirees who make Tombstone their winter home.

Among the many attractions of Tombstone is Boot Hill Cemetery on the northwest edge of the city. The cemetery takes its name from the fact that many of the people buried there died quickly and violently and were buried with their boots on.

Boot Hill is a real grave yard in which some 250 to 300 people are known to have been buried between its opening in 1878 and official closing in 1884. Boot Hill was abandoned and mostly forgotten after the opening of the present cemetery, with the more mundane name of The Tombstone Cemetery, opened on the other side of town in 1884.

Beginning in the 1920s some local people began taking an interest in Boot Hill and efforts were made to restore it. Most of the original grave markers, having been made of wood, had either totally disintegrated or had deteriorated to the point of being unreadable. However, using local records, family files and memories of those still alive from that period, most of the graves were located and identified. Using old records, new grave markers, were placed on the graves. The new grave markers were, as near as possible, duplicates of the originals, being made of wood with inscriptions reproduced from old records.

Today, Boot Hill is a major tourist attraction, with the grave markers telling visitors the story of life in Tombstone during its wild years in the late 1870s and early 1880s. 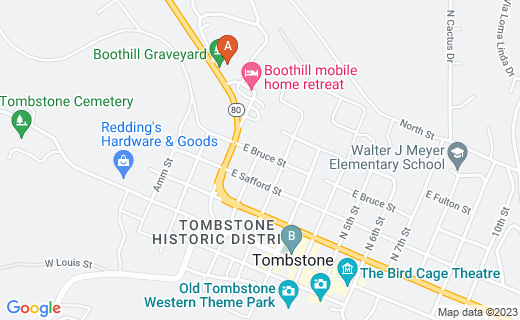 Boot Hill Cemetery. Located on Northeast side of Tombstone on Highway 80.

Lester Moore a Wells Fargo agent in Naco, AZ killed in a dispute over a package