A City of Statuary

Most visitors to the City of Cleveland — in fact, most of its residents, as well — don't realize that this is a City of Statuary. Fine figurative sculptures grace the city's many parks, and many of the public and governmental buildings serve as backdrop to striking compositions of stone and bronze.

One of a pair of similarly sized and staged sculptures flanking the Lakeside Avenue entrance to the Cuyahoga County Courthouse, this statue depicts Founding Father Alexander Hamilton. Seated, grasping papers in his left hand, while his right grips both hat and cane, this figure is the work of noted sculptor Karl Bitter.

Austrian-born Karl Theodor Francis Bitter (1867 – 1915) immigrated to the United States by the age of 22. In his native land, Bitter had previously undergone training in both the imperial school for applied arts and an academy of fine arts. As a sculpting apprentice in Vienna in the 1880s, Bitter was involved in the embellishment of the great Ringstrasse that was then being constructed encircling the historic central core of Vienna. As a talented architectural sculptor, he was in great demand for the many civic structures, institutional buildings, private mansions and commercial structures being erected along that beltway.

Departing Europe for the United States in 1889, and thence becoming a naturalized citizen, Bitter soon caught the eye of Richard Morris Hunt, famed architect to the moneyed clientele of New York. Significant sculptural commissions began to come his way. Over the ensuing decades, Karl Bitter was to sculpt pieces not only at Chicago’s 1893 World’s Columbian Exposition, but also at the 1901 Pan-American Exposition in Buffalo, the 1904 St. Louis Exposition, and San Francisco's 1915 Panama-Pacific Exposition.

The original Cuyahoga County Courthouse, a key element of the city's 1903 Group Plan, was under construction as Bitter was conducting his other Cleveland projects. This large and imposing Beaux-Arts edifice, designed by architects Lehman & Schmitt, was to be one of the first structures of the Plan that classically arranged Cleveland’s core of civic buildings and public plazas. The grand and elaborate 4-story pedimented entrance of the structure was artfully aligned with the Ontario Street right-of-way to create a commanding civic presence. That Lakeside Avenue entrance to the structure became the prime point of punctuation for Bitter’s paired sculptured figures. 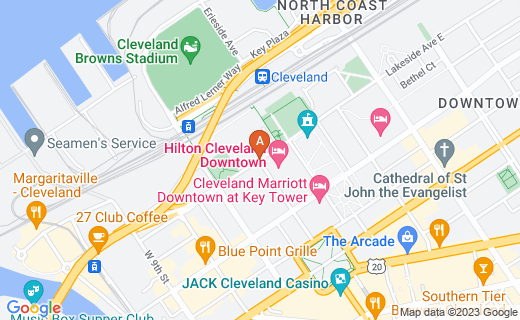 Travel north on Ontario Avenue and the Courthouse will be framed directly ahead.

This work of art — ‘Alexander Hamilton 1757-1804’ — is a slightly larger-than-life cast bronze statue of one of America’s more interesting and intriguing Founding Fathers. A graduate of King’s College (now Columbia University) in New York, Alexander Hamilton went on to become an economist, a political theorist, a Constitutional lawyer, an artillery captain, a close aide to George Washington, a member of the Continental Congress, author of the Federalist Papers, and the nation’s first Secretary of the Treasury.