Alhambra - Sierra Nevada - Spain - the Magic and Beauty of an Islamic Monument. A Travellers Tale.

I left east Midlands airport at 6:30 pm on a Ryanair Boeing 737-800 flight to Malaga in southern Spain on the Costa del Sol. The flight was the beginning of a ten day journey that would take in two of Spain's most interesting cities - Granada and Seville - over the 2014 Xmas period. After an uneventful flight, it landed at Malaga airport on time at 10:30 pm. Although I had travelled light with a well-packed cabin bag with enough for a ten-day trip because the flight was full the airline put my bag in the hold for no extra cost and I had to wait for the bags to come onto the luggage belt at Malaga. So although the hotel was only five minutes from the airport I did not check in until 11:45 pm. 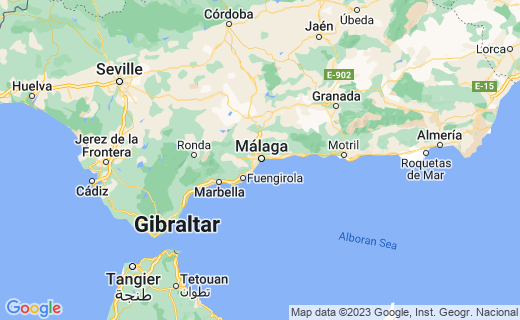 The next morning, I picked up the hire car, a Ford Escort, from Malaga airport and started the long drive to Granada. I decided to drive along the coast road towards Motril where I would turn inland up into the Sierra Nevada and on into Granada. Around 11:30 I stopped at a beachside café and enjoyed a morning coffee sitting in the warm sunshine. I then drove through Toro del Mar, Torrox, Nerja and stopped for lunch at Almunecar. After another thirty kilometres, I hit Motril and turned inland on the A44 motorway towards Granada. As I climbed higher into the foothills of the Sierra Nevada and drove further away from the sea the temperature started to fall and what had been a nice warm day gradually turned into a chilly afternoon.

I arrived in the city of Granada towards dusk bent on finding the hotel before the sunset. The hotel was as it turned out outside of Granada up in the Sierra Nevada in a small but beautiful village called Monachil. Eventually, I found the village and the hotel, Huerta del Laurel, just as dusk became night. The hotel was lovely, a traditional wooden building, nice and cosy with great views over the village and the mountains. After a rest and brush up I put on my warmest attire and headed out into the cold night air. The village was all lit up for Christmas with fairy lights everywhere. I walked down to the bridge across the Monachil River and found a friendly restaurant called El Molino where I had some wine and food before retiring to bed after a long day travelling.

I awoke to a cold morning and saw that it had sprinkled a little snow overnight. After breakfast, I headed down towards Granada and the Alhambra. This site is perched atop a high escarpment and can be seen for miles around. I parked up in their car park and walked a few hundred yards to the entrance. I had pre-purchased tickets, ( 14 euro per person for the hours 8:30 am to 14:00 pm), (the Generalife is an extra cost of 7 euro and has allocated visiting times), as I had been advised and armed with my guide and brochure I entered the gates of the Alhambra.

The Alhambra is a fortress and palace designed in Medieval and Moorish style which was built in the years 1238 to 1358. The name itself signifies ‘red’ and probably alludes to the red brickwork constructed from clay and Tapia sun-dried bricks. Created on a highland that overlooks the city of Granada, the palace was erected in the sovereignty of Ibn al-Aḥmar, creator of the Nasrid dynasty, and his heirs. The impressive decorations of the interior are attributed to Yusuf I who died in 1354. After the eviction of the Moors in 1492, much of the inside was destroyed and the furniture was ruined or taken away. Charles V, who reigned in Spain as Charles I from 1516–56, reconstructed sections in the Renaissance style and destroyed part of the Alhambra to build an Italianate palace designed by Pedro Machuca in 1526. In 1812 some of the fortifications were destroyed up by the French in the War of Independence, and in 1821 an earthquake triggered further damage to the edifice. Restoration of the structure commenced in 1828 and continued through the 20th century.

The Moorish piece of the Alhambra comprises the Alcazaba (citadel}, which is the oldest section with only its gigantic outer walls, towers, and battlements are left. Outside the Alcazaba is the Alhambra palace itself, and further on the Alhambra Alta (Upper Alhambra), which was initially tenanted by bureaucrats and courtiers and was a section of a royal city creating a place of government.

The major courts of the palace are the Patio de Los Arrayanes, the Court of the Myrtles and the Patio de Los Leones, the Court of the Lions, so-called because in the heart is the Fuente de Los Leones, the Fountain of the Lions, an alabaster washbasin braced by the statues of 12 white marble lions, symbols of strength and valor. The most significant rooms of the Alhambra are the Salón de Los Embajadores, the Hall of the Ambassadors, a spatially impressive reception room; the Sala de Los Abencerrajes, the name of which was derived from a fable in which Boabdil, the last monarch of Granada, having invited the Abencerrajes chiefs to a feast in this room, massacred them there; and the Sala de las Dos Hermanas, the Hall of the Two Sisters, with its incredible specimen of stalactite art.

To the east on the Cerro del Sol, the Hill of the Sun, is the Generalife, from the Arabic Jannat al-ʿArīf, Garden of the Builder, built in the 14th century as a summer palace for the sultans. The complex is concentrated on attractive patios such as the Patio del Ciprés de la Sultana, the Court of the Sultana’s Cypress. Terraced gardens, ponds, and cascades combine to enthralling effect in La Acequia Courtyard, baptized for the canal that provides its water. A theatre in the Generalife is the location of international recitals of music and dance. The Alhambra and the Generalife have jointly elected a UNESCO World Heritage site in 1984.

After spending several awed inspired hours inside the magnificent palace of Alhambra I picked up the car and headed for a restaurant for a late lunch. I then took a driving tour around the Alhambra plateau to a monastery hidden away in wooded hills towards the Sierra Nevada. Unfortunately, the monastery was closed but I could walk its gardens. I then returned to our hotel in Monachil for the night. 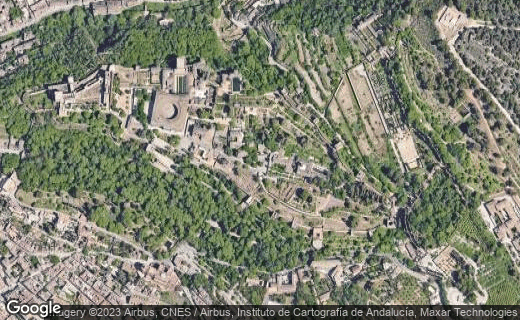 What do you think of the Alhambra and Granada?

The next morning, I visited an old section of Granada which had been turned into a museum. It is called The Cave House Museum of Sacromonte and covered a large area which incorporated 11 separate caves. Each cave recreating a cave house dwelling with its kitchen, stables, traditional arts and crafts such as basketry, ceramics, blacksmiths forge, and weavers loom. Several caves told the story of the flamenco dance which apparently originated from this district. The outside areas showed us the types of plants and geology of the area. It was an extremely interesting museum set in a unique historical style taking us back hundreds of years into the past. The views from the museum were spectacular as I could see the escarpment of the Alhambra opposite, the city of Granada and the Rio Darro Valley before us.

I was hungry after our exertions climbing up to the museum and walking around, well you know how I enjoy walking up things, so I had lunch in one of the traditional but quaint tapas bars situated along the road that runs by Sacromonte. After lunch, I drove back to our hotel and as there was a couple of hours daylight left I explored the village and its surrounding areas. I ate that evening in the El Molino which this evening had live music. Bed was not late as I had a long drive the next day to the beautiful city of Seville. (A separate hub)