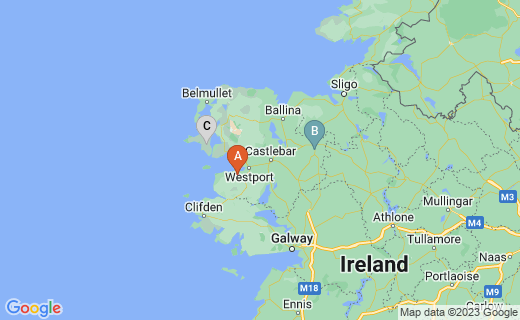 Croagh Patrick, the Holy Mountain, and the story of St Patrick

Have you ever heard the story of St Patrick casting out the snakes from Ireland? Well in 441AD, St Patrick, the patron saint of Ireland, spent the forty days of Lent on Croagh Patrick, a rocky mountain which rises up behind Westport and Clew Bay. He spent his time, as any good saint would, in fasting and prayer, and it was during his time there that he is credited with having sent the snakes slivering to their doom off of the precipice of Lugnanarrib, just south of the summit. This story has made Croagh Patrick a major destination for pilgrimages, and they take place three times each year, on St Patrick's Day 17th March, Assumption Day August 15th, and on the last Sunday in July which is known as Reek Day. (Croagh Patrick is known locally as 'The Reek')

Reek Day coincides with the old pagan festival of Lughnasa, and on this day thousands of pilgrims still make the 3hr 30min climb to celebrate Mass at the summit, many of them barefoot and fasting! The pilgrimage commences at the village of Murrisk, and the first main point of interest on the path is a statue of St. Patrick. Prayers are said here by many of the pilgrims, and it's also a stop off point for many who can't finish the ascent. Further along the path, there are three pilgrimage stations, each of which has a sign with instructions for the proper rituals and prayers.

On July 27th 2009, The Irish Times reported that only around 15,000 pilgrims made the climb this Reek Day due to blustery high winds and intermittent rain. The numbers were well down on previous years due to the poor weather conditions, but the mountain was busy throughout July, as regular pilgrims chose finer days to make the climb. Enterprising locals offered walking sticks for sale at the foot of the mountain, and as the terrain can be rough-going and shaley, these are probably a worth-while purchase! There's a great camaraderie amongst the pilgrims, and many are regulars, coming back year after year, to make the journey up to the little chapel at the top, which was built in 1905 and took twelve men six months to complete.

Reek Day in July 2014 was again misty and damp, but pilgrims were not deterred, and a great account written by one of the many visitors that day, can be read here:

At the top, pilgrims are amply rewarded for their efforts. The views from the peak are stunning. On a clear day you can see the Twelve Bens in the south, and the mountains of Achill Island in the north. Croagh Patrick itself is not particularly spectacular as mountains go, but you certainly can't say that of the surrounding scenery. This part of Ireland is particularly beautiful, and one of the true gems of the area must be Clew Bay.

Clew Bay in the mist

The English 19thc novelist William Makepeace Thackery visited the area in 1842, and on seeing Clew Bay he wrote, " The islands in the bay, which was of gold colour, look like so many dolphins and whales basking there." My own first view of Clew Bay was of islands appearing through the mist, and yes , they did look like a shoal of huge aquatic mammals! There are literally hundreds of small islands and islets off the coast here, ranging from rocky outcrops, right through to the biggest of the Irish off-shore islands; Achill Island, a favourite Irish holiday destination.

Many of the rocky outcrops are actually drowned Drumlins, long hills formed by glaciers during the last ice age 10,000 years ago. Clew Bay has also attracted it's share of unexpected visitors. In 1999 a walrus was photographed on the rocks sunning itself. The creature was obviously a long way from home, but it's not the first such sighting off the Irish coast!

The Quay at Westport, an architectural gem in it's own right, looks out towards the bay, and is home to the Clew Bay Heritage Centre,  which houses an eccentric mix of photos, farming implements, old coins, and other random objects. In the summer walking tours of the historic town of Westport are arranged from here. There are also a number of restaurants, pubs, and gift shops at the Quay. We enjoyed a particularly fine meal at one of them, The Asgard, which faces the sea front,  on our last visit here.

The pretty, Georgian, sea-side town of Westport offers holiday makers a warm, Irish welcome, and it has become a magnet for visitors from all over Europe in August each year, when it hosts a very lively music festival. If you're planning to come and sample the musical and artistic delights on offer, you'd do well to book in advance, as accommodation can be hard to come by in the summer months. A popular destination on the tourist trail is Matt Molloy's pub, where the best of Irish live music can be found and enjoyed in an intimate setting, and accompanied by a pint of Guinness if you so wish.

Westport's main tourist attraction is to be found about a mile out of town in the form of Westport House, http://www.westporthouse.ie/ . This elegant pile was built on the site of one of the castles of the 16thc pirate queen, Grace O'Malley, and it was designed in 1730 by Richard Cassels. These days it has recreated itself as a major tourist attraction with offerings to suit all tastes. Inside the house there are fine examples of period furniture, and numerous works of Art including a Rubens, and local views by James Arthur O'Connor. An upstairs room still displays some beautiful Chinese wall-paper dating from 1780, and a waxwork exhibit presents a tableaux that features well-known Irish writers and dramatists from days gone by. In the basement, the dungeons of an earlier building are open for view and include suitably ghostly sound effects

Outside there's fabulous grounds with a playground for children, a pitch and putt, a log flume, and a train ride round the park. The house overlooks a beautiful lake, and there are boat rides available in swan shaped pedallos. A soft play area known as 'Pirate's Den' is housed in a separate building close to the pitch and putt, and it offers indoor entertainment for children on rainy days throughout the year. Outdoors, the many activities are now branded together as Pirates Adventure, although most of these are closed in the winter months.

There is nothing stuffy or boring about Westport House. The owners themselves have a large family, and a great deal of effort and ingenuity is employed to guarantee that a good time is had by visitors of all ages. Campers and caravanners are made welcome here, and the pitch price includes access to a good deal of the Westport House facilities.

Knock Airport (see map above) is the nearest Irish airport to Westport, and is around a 45 minute drive away from Westport. Knock has flights to and from the UK on a regular basis, and also has a good selection of car hire companies on site. UK airports served by flights from Knock include London Gatwick (Aer Lingus), London Stansted, and London Luton. Be aware, however, that it is a small airport, and the on-site catering facilities in the departure lounge are extremely limited. There is hot food available, however, it's expensive and not amazing, especially if you are a vegetarian! If you are due to check in at lunch-time, take food with you, or eat before you arrive there.

Knock itself, has no small claim to fame, being a site of pilgrimage since miraculous sightings of the Virgin Mary, accompanied by St Joseph and St John, began to attract visitors to this quiet Irish town in 1879. As a site of Catholic pilgrimage it ranks right up there with Lourdes and Fatima!

IF You haven't yet joined then why not SIGN UP WITH HUBPAGES TODAY?

HubPages membership is totally FREE - So get writing, make friends (and if you want) Make Some Money!

This whole area makes a fantastic holiday destination for all the family, with diverse leisure activities available close at hand, including:

Westport and the surrounding area is very well served with a great variety of hotels, B&Bs, holiday cottages, campsites, caravans for rent, and all manner of self-catering accommodation. This is a reflection of it's popularity as a holiday destination, and the huge range of leisure activities on offer locally. The town also has a fine selection of eateries with something available to suit most tastes. The restaurants and pubs on Westport Quay offer wonderful, locally caught fish and seafood, and The Asgard restaurant is a personal favourite. But of course the great thing about a holiday in Westport, just as with any holiday on the Emerald Isle, is the warm Irish welcome.