Aqaba Jordan is situated to the east of the Sinai Peninsula and at the southern tip of Jordan where the Gulf of Aqaba flows into the Red Sea, this is the country’s only port and a favorite diving and beach resort for Jordanians. But it is what lies beyond in the far reaches of a desert landscape that captivates the imagination.

Always a port and a junction on trading routes between Asia, Africa, and Europe. Aqaba reached its peak during Roman times. Known by various names over the centuries --- Berenice, Aila, Aelanda, and Ayla --- it is referred to in the Bibble and as the port for Sinbad of Arabian Nights fame. In modern times, the important Battle of Aqaba took place here during World War I. Led by T.E. Lawrence, known to all as Lawrence of Arabia, the Ottoman occupiers were forced out, opening up supply lines for Arab and British forces to the north. Today, Aqaba nimbly combines maritime commerce with tourism and is the gateway to the popular desert destinations of Wadi Rum and the fortress city of Petra.

Red Rose City Half as Old as Time

It seems no work of Man’s creative hand,

But from the rock as if by magic grown,

that crowns the hill and consecrates the plain;

But rose-red as if the blush of dawn,

that first beheld them were not yet withdrawn;

The hues of youth upon a brow of woe,

match me such marvel save in Eastern clime,

a rose-red city half as old as time.

Choose from exploration of Petra to Wadi Rum or a full day once in a lifetime spa experience at the Dead Sea. The Rose Red Desert City of Petra was created by the Nabateans more than 2000 years ago but it was only “rediscovered” in 1812 by a young Swiss Explorer who brought to the world’s attention a magnificent city built out of red sandstone.

Highlights of a visit to Petra include the “Siq”, a very narrow riverbed that leads to the “Treasury”, a towering edifice 140 feet high by 90 feet wide. A testament to the skill of Petra’s Nabatean carvers continues with temples, tombs, a Roman theatre, burial chambers and public buildings. The classic film “Lawrence of Arabia” starring Peter O’Toole comes to life when you visit the haunting desert of Wadi Rum on a Jeep Safari. You can just imagine the dashing British officer galloping across the sands on his trusty camel.

What makes the Dead Sea devoid of life, its high content of salt and minerals is exactly what gives it renowned curative powers. Visit a luxurious spa resort and bathe in the rich black mud, then wash it off as your buoyant body floats effortlessly in the super salty waters.

T.E. Lawrence, the famous British officer, and author described the magnificence of Wadi Rum in his book “The Seven Pillars of Wisdom”. Bedouin tents are such amazing structures, they are “replicated” in the west for recreational purposes. Sadly, fewer woven tents are being made as many Bedouins are turning to the practicality of canvas tents. In addition to its sandstone monuments, the caravan city of Petra features an ingenious water management system that allowed extensive settlement of an essentially arid area during ancient times. The Dead Sea is the lowest point on earth and its reputation as therapeutic dates back to Cleopatra who ordered cosmetic factories built on its shores.

Did you know that Dead Sea is one of the world's saltiest bodies of water. 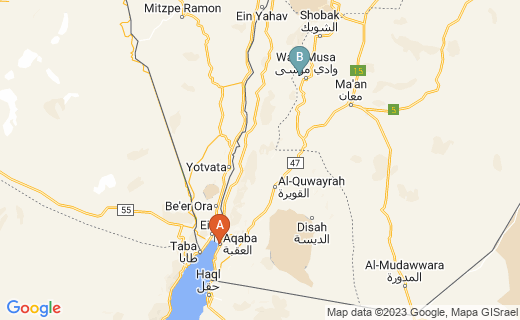 Rose Red City, Half as Old as Time

Other Fun Places to GO!